Published by My Dishwashers Possessed-Kathy Radigan on August 8, 2017 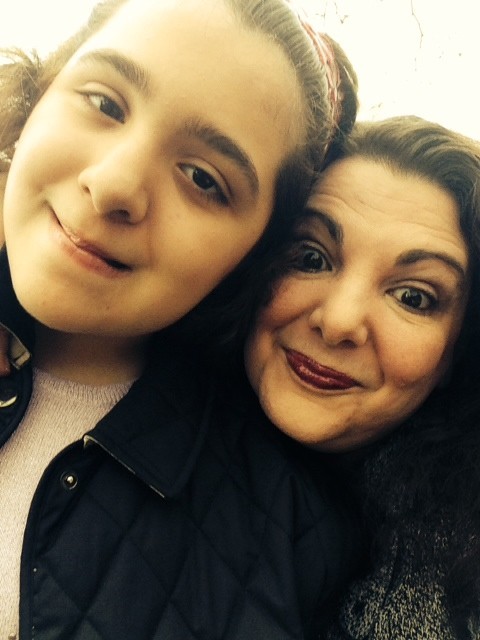 Today as I was struggling to figure out what to write, I fell back on a typical strategy, I begged my kids for suggestions. My 15-year-old daughter — whose significant special needs make communication very challenging — looked up at me with her big brown eyes and said I should write that she loves me.

“Mom, that’s so sweet. You should do that. You should write the piece Lizzy wants,” said her devoted and protective 18-year-old brother.

I smiled at my daughter’s suggestion and at my son’s overconfidence in my writing ability. Then I begged them for an idea I could use.

Yet as I sit at my computer, I can’t help but think about the significance of what Lizzy said in between bites of waffle. My daughter spends much of her time in her own world, and I’m the one person who has always been able to bridge her world of princesses and talking animals with the real world and meet her needs.

It took a while, but I learned that when she says,“The butterfly princess is hungry,” she means she wants someone to pass her the bread from the other side of the table, and she wants it on the plate with the butterfly on it. Over time I came to understand that when she screams, “The hippo can’t get her umbrella up,” it simply means she needs help getting dressed for school because her arm got stuck in the sleeve of her shirt as she was putting it on.

I have to admit that I’m not always right even though I hold a doctorate in the art of deciphering my daughter’s enigmatic language.

For about a year I would bring home an apple pie thinking I was getting Lizzy what she wanted for dessert because she was always asking me to buy “apple pine.” I could never understand why she wasn’t happy whenever I brought one home from the market.

I’ve always thought it ironic that the one thing my daughter has the hardest time with, communicating with words, is the one thing that has always come the easiest to me.

I learned to talk at an early age and, according to most people who know me, have never shut up.

One thing my daughter and I have in common is our love of the world of make believe and fantasy.

When I was a young girl, I too spent a lot of time in my own world. I was a bit of a loner, never totally comfortable with people my own age. I frequently escaped to what I called the woods. In reality I headed to the row of trees that lined our backyard fence, but when you’re a young girl of six or seven, a small cluster of trees might as well be Sherwood Forest.

Here I was free to go off into my own world without my parents interrupting me to to do my homework or my sisters teasing me because I was so weird.

As I got older I knew my need of being in my own world made me different and sometimes the target of ridicule. If I didn’t want to be thought of as odd, I had to choose between a life of fantasy and the real world. I soon made it my mission in life to fit in and look “normal.”

Blending into the crowd was my main objective. Creativity and individuality became something I actively shunned. I wanted to be like everyone else.

I succeeded. By the time I got to high school, I reserved my creativity for acting class. As I got older and left acting for the joys of eating and paying my own bills, I became just one more young woman who lived in the City. I was now content to sit in an audience and let others perform.

Perhaps I shouldn’t be so surprised that the girl who desperately wanted to live in a world of her own — but ultimately chose reality — would become the mother to a child who doesn’t see the difference between the two.

It’s not always easy to be Lizzy’s mother. I often fear I’m doing it all wrong. Today it was nice to know that she wanted everyone to know how much she loves me.