My College-Age Daughter Thinks College is a Good Thing 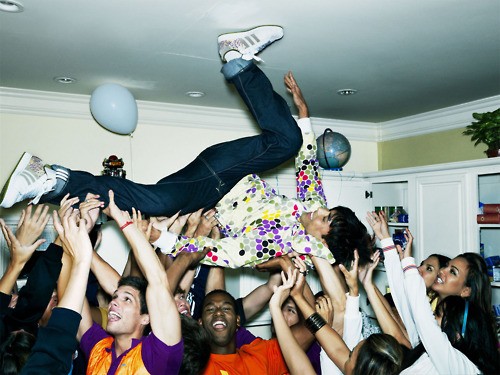 I entered my daughter’s room to find her knee-deep in a pile of cardboard boxes, plastic containers and garbage bags, all stuffed to the gills. The scene resembled someone preparing for, or returning from, the mother of all yard sales.

“Check the calendar, Dad. I head back to college in two weeks. Just getting an early start on packing.”

“So, you’re actually going back?” I said. “To experience what will be known as your junior year?”

She stopped trying to cram a toaster into a container that looked as if it were made for holding little more than toast. “Why wouldn’t I go back?”

“You’re a Republican, right? You voted for Trump?”

“Yes, and yes,” she confirmed. “But what does that have to do with my decision to complete my college education?”

“Nobody has polled me about anything,” she replied, and then added, “Wait, some dude at the basketball game last January was asking questions about our Spring Break plans. Was he from Pew?”

I enlightened her on the recent poll from the non-partisan fact tank concluding that 58 percent of Republicans feel college has a negative effect on the country, a 13 percent increase over last year. Colleges are still viewed in a favorable light overall, as Democrats overwhelmingly support their existence, according to the poll. And young Republicans such as my 20-year-old daughter still, on average, view college favorably. But I wanted her views on higher education before dropping her next tuition check in the mail.

“Dad, I can’t think of one negative thing about college,” she said, a sense of panic creeping into her voice that implied I might march her down to a local employment office in the next five minutes and say, “She’s ready to work. Just give her whatever’s available.”

“Does that opinion have anything to do with the fact that you’ll be celebrating your 21st birthday at school this year?” I asked.

“Yes, I mean no, of course not. It’s all about the education, Dad. You want me to have a diploma, right?”

“That was always the goal,” I said. “But now I wonder what might happen if your first job interview finds you sitting across the desk from some crusty, longtime Republican donor who looks at your college experience on your resume the same way you looked at broccoli when you were 5.”

“That’s another great thing about college,” she said. “I don’t have to eat vegetables.”

“That’s worth the price of tuition,” I said. “But what about the stodgy Republican who may not hire you because of your academic history?”

“I’ll wear a ‘Make America Great Again’ hat to my interview,” she said. “That should help.”

Not totally satisfied with her answer, I shifted the conversation to other findings from the Pew study. “What is your view of banks?” I asked. “Positive or negative?”

She didn’t hesitate. “Definitely negative. The ATM across from the student union is, like, always busted.”

“Good to know. My point is, do you think banks and financial organizations are affecting this country negatively? What about churches? Labor unions? The media?” The Pew study also found markedly different opinions of these institutions, based on political party preference.

“Dad, I’m about to pack my bras. Can you turn around please?”

I did as I was told but didn’t stop the conversation. “Honey, I’m just curious about whether your political views are impacting your opinions on other organizations. You’re 20 and…”

“Whatever. I guess I just want to be ready for a world where I may have trouble finding a place to worship. Or deposit my social security check, provided there’s enough money for me to actually receive a check. Or turn on the local news at 11 p.m.”

I sensed the conversation was ending. “Have fun at school, honey,” I said. “Just promise me that you’ll find a Democrat, have some serious conversations and try to find common ground on issues. That’s what this country needs right now.”

“Not a problem,” she said. “I do know two of my roommates voted for Hillary. Yet we’re ALL in agreement that we should go to Cancun for Spring Break.”

Pew researchers, are you listening?

Airbnb Guests! My Daughter's Bedroom is Comfy and (sort of) Clean
Welcome Home From College. When Are You Going Back?
The Politics of Clown Alley
advertisement

Airbnb Guests! My Daughter's Bedroom is Comfy and (sort of) Clean
Welcome Home From College. When Are You Going Back?
The Politics of Clown Alley