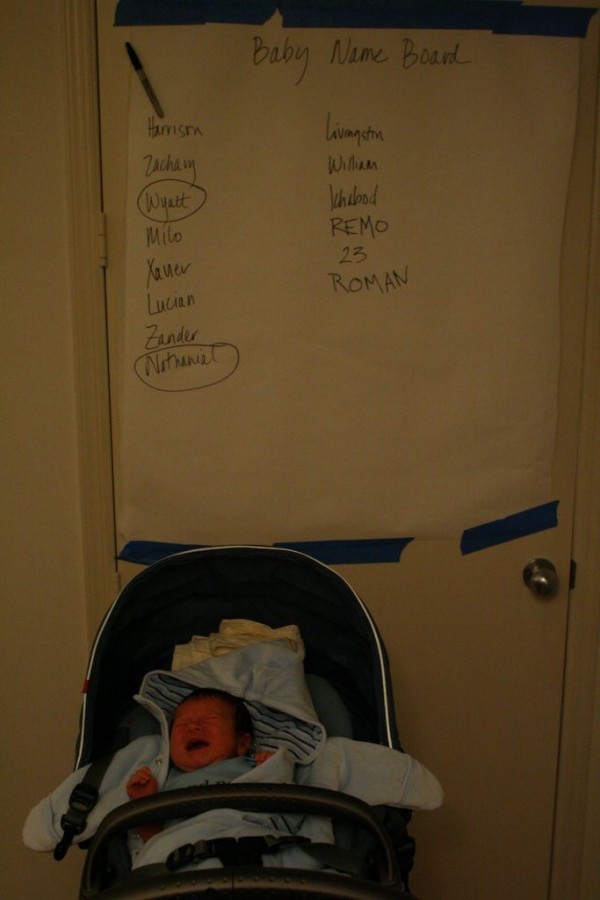 Ah baby naming - the not so easy task of giving our offspring a "title" is tricky. There are a lot of things to take into consideration, for example, will the baby's initials spell something unsatisfactory? Will they be named after someone? Is there a name they absolutely cannot have? And the list goes on...

Way back when I was pregnant with our first son, twelve years ago, we decided early on that we were definitely going to find out what we were having. We live in NYC, space is limited, knowing ahead of time made it easier.

With that decision done, once we found out we were having a boy we went to work on finding his moniker. My husband immediately started calling my belly Ichabod - and I have no idea why that was, but it was. We would tease my mom that we were going to use Ichabod as his first name and she would give us her open opinion right on the spot - she did not approve and she couldn't say it correctly either. Maybe that was on purpose, who knows.

One thing we did learn early on is that everyone has an opinion, so rather than publicly shoot ideas and suggestions down, we decided to embrace them. We put up a big white sheet of paper on the outside of our coat closet door for friends and relatives to use as a whiteboard of sorts. We ended up doing this for both of our boys and it worked out well.

For several months, the lists grew. The names ran the gamut from classic to eclectic and everything in between. Baby name books and websites were consulted and daily discussions with one another were had. We liked ethnic names like Enzo and Giovanni but when you put those names with ours, they didn't "go" together. Man, naming a human being is a difficult task!!

One afternoon my husband was looking over the list and wanted to know why we had to choose 2 names, first and middle, how come couldn't have more? My response was something like "I don't think there's a limit, but I have no idea" and that's when the light bulb went off in his head. "Well, if there's no limit, then let's pick a few"...Game Changer!

We decided to choose names with significance to us and our relationship and so in the end, our boys each have more than the traditional first, middle, last names - they have five (well six if you count their last name) each. I'll break them down...

Our first born is:

Now, you can imagine the phone call I got from the hospital records department the day we brought Wyatt home. It went something like this:

Hospital: "Mrs. Femia, this is so and so from St. Luke's Roosevelt Hospital and I'm working on processing your child's birth certificate. I have a few questions.

Hospital: So, how many of these names do you want on this certificate?

Me: All of them

Hospital: OK, and how many of them are his first name?

Me: Um, one of them is his first name, that would be Wyatt. All the rest are his middle name including the number.

Hospital: Yes, what about this number, how would you like that to be on the certificate? As a number or spelled out? (I remember some funny banter happened here but don't remember word for word. Probably something like "well that's a first for me" kind of thing).

Hospital: OK, I'll do my best to make that happen, but if I can't, we'll spell it out.

Me: Ok, please do what you can.

Two days later, his birth certificate came in the mail and it was perfect. #23 and all.

Six years later, Wyatt's little brother came along. We did the same thing with him. White boarded name suggestions and agonized over the order of our favorites. In the end, Wyatt's suggestion of "Tomato" lost out and his little brother's names are:

Crazy, right? Maybe a little. I can't tell you how many blank stares I've gotten over the years after telling others their name stories! In the end, we wanted unique and fitting for the humans we are raising and I personally think we did a great job. We didn't tell anyone prior to them being born what their names would be, we just kept compiling the lists and letting our loved ones be a part of the process.

Naming a person is a challenge, and you're never going to please everyone, so make it special and who cares what other people think. Your kid is unique, and the name you choose for him (or her) is exactly what it should be.

Good luck! And if you need any help, I still have our name lists tucked away for posterity!

What's in a name? Everything, of course!
Baby Naming Tips In A Nutshell
Baby Naming Rules and Permission to Break Them
advertisement

What's in a name? Everything, of course!
Baby Naming Tips In A Nutshell
Baby Naming Rules and Permission to Break Them