Motherhood: Letting Your Bozo-hair Fly And Not Giving A Damn

Published by Danielle Sherman-Lazar on November 12, 2018 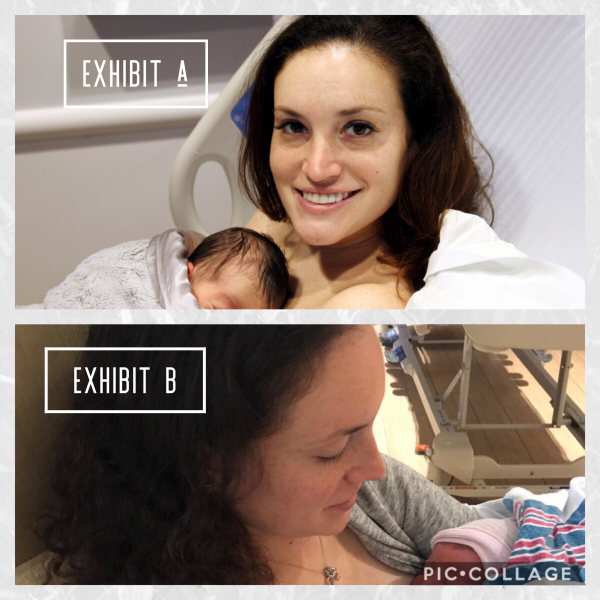 I was scrolling through pictures of my kids as I tend to do at night when I can’t fall asleep. Because I mean, I don’t spend enough time with my kids as a stay-at-home parent so I might as well look at pictures of them while they are sleeping. I hear this is a totally normal practice amongst the mommy population believe it or not. Oh, the paradoxes of motherhood!

Let’s face it, I was a completely different person.

I had no idea what to expect. I knew my life would change, but I didn’t know how. Being a type “A” personality I always figure out the “how” in the unknown before I approach anything, but this was different. This, I couldn’t practice or learn beforehand.

I mean, I’m the girl that asked my gynecologist if I could practice pushing before my first birth.

For those like-minded overachiever individuals, the answer is: Nope. You can’t.

My first pregnancy, I was induced after 40 weeks. I prepared for how I would look if I couldn’t control anything else. I left work early that day to have my hair blown out, to avoid bozo-the-clown-hair in the hospital. A couple of days before that I had fake lashes applied to my eyelids because pregnancy pictures are a big deal, don't you know? I wanted to look decent. Plus, I was meeting my baby, I wanted to make a good first impression. What if the baby saw me and that was the only reason she started crying? I wasn’t going to let that happen. I thought of everything that seemed important at the time.

And basically, I looked better giving birth than I do in my everyday life with two kids.

But like most deliveries, it wasn't so easy. The epidural didn’t take, and I also had a reaction to it where my body was so damn itchy. I wanted to scratch my skin off. I eventually threw up all over myself from the pain and nausea.

Conclusion: labor was no joke!

I had very few “asks” at my delivery, but still some. First request: I needed my mom there, my best friend, for her usual mommy emotional support and encouragement. Second request: I wanted a big chef salad for later that night because I missed deli meat A LOT.

All of this happened, and I still managed to look like Exhibit A.

It’s funny how our priorities change. Motherhood changes you. It makes you realize what matters. It makes yourself less of a priority but in a good way. It puts your values in check.

When I was giving birth to my second baby, my only priority was my 18-month-old daughter at home. My mom, my main support outside of my husband, stayed with her because my daughter knows her the best out of anyone, besides me, and it was her first time away from me. I was so worried about her and how she would react to mommy being gone.

And oh, about that deli meat. I didn’t think twice about it this time around.

My second pregnancy, I went into labor a month early, but this labor was different. The actual labor after the epidural was like a vacation. It was almost relaxing. I wasn’t running after anyone, I was just resting in bed. I felt like I was on a beach with a mojito. G-d bless epidurals and my anesthesiologist.

This person was more prepared, yet still nervous because she never experienced life with two babies. There were still a lot of unknowns: she never left her toddler before for this long. She also didn’t know how that 18-month-old would react to her new baby sister. She also went into labor a month early so was worried about her infant. She had so many worries. Too many things on her exhausted mama mind.

So, this person didn't think twice about her appearance. She let her bozo hair fly, and it didn't look so bad after all. And if it did, she didn't give a damn.

And this is what motherhood does, it gives you some much-needed perspective.

My Reluctant Natural Childbirth: What I Really Think About Unmedicated Births
We Became Mothers
How You Gave Birth Doesn't Define Your Strength As A Woman
advertisement

My Reluctant Natural Childbirth: What I Really Think About Unmedicated Births
We Became Mothers
How You Gave Birth Doesn't Define Your Strength As A Woman