Motherhood: It's the Best Ride You'll Ever Take 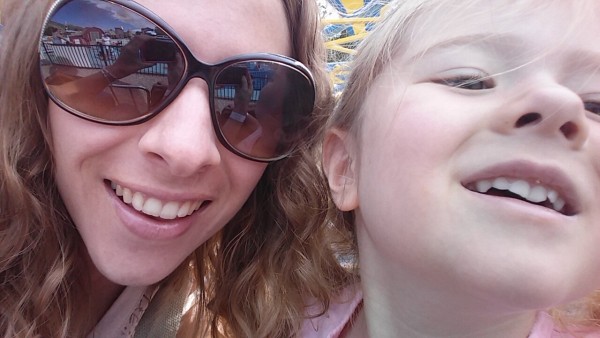 Motherhood is much like a ride at an amusement park – it's both thrilling and terrifying.

The wild ride begins as soon as a pregnancy test confirms the presence of new life. And from that moment on, your days are filled with twists and turns, ups and downs. Tears of joy are followed by tears of terror. Laughter can morph into crying in a matter of seconds. One minute you've got butterflies fluttering around in anticipation and the next you're barfing those butterflies right out.

It's a ride that tosses you around at a dizzying pace. It moves quickly, propelling you forward, then jerking you back. It leaves you breathless, gasping for air.

There's no telling what awaits you on the coming peak or in the following valley. The only thing that's predictable is that it's totally unpredictable.

At times, your hair flows wildly around you, untamed, free – the rush of air invigorating. And you never want it to stop. And then, suddenly without warning, you want nothing more than to pull your hair out. The change in speed, the shift in direction, the deafening commotion – it becomes suffocating. And you desperately want the ride to stop.

But then there's a peaceful lull. A moment of clarity. You catch your breath before the clamor and confusion take over again.

It's electric. Intoxicating. Exhilarating. But it also fear-and-panic-and-anxiety inducing.

You hold on tightly, grasping for control, desperately trying to ignore the fact that you don't actually have any. You enjoy the highs because you know the lows aren't far off.

Motherhood. It's a heck of ride. Sometimes awesome and sometimes awful. It never stops. Whether your children are big or small, young or old, living in this life or the next.

It's a balance between hanging on and letting go. Between embracing the noise and shutting it out. Between freedom and force.

It's a ride that requires courage, sacrifice, and surrender. A ride that dominates your life. One that both fills your heart and empties it.

At once it's the scariest and most breathtaking ride you can imagine. It's both energizing and exhausting.

It's hard. Distressing. Confusing. Unsettling. And still, it's without a doubt, the best ride of your life – one that you'll never regret taking.