Published by Danielle Sherman-Lazar on August 24, 2021 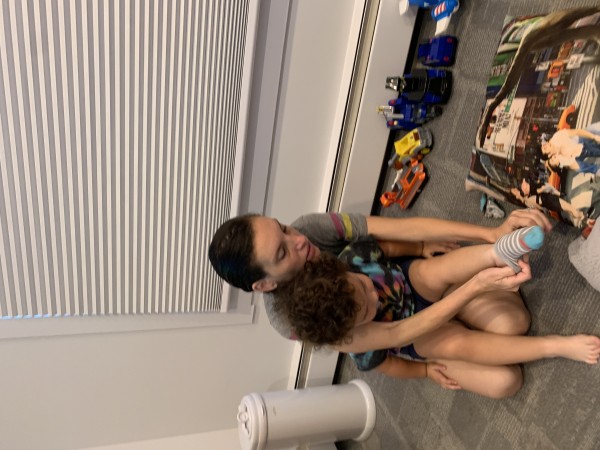 Even when she’s not with her kids.

When she’s out for dinner, she’s checking the monitors on her phone to make sure everyone's sleeping peacefully. She’s stressing that the baby will let out a primal scream when he needs cuddles and quickly realize mama isn't close,

because she never shuts off.

When she’s out running an errand, she calls her partner to make sure everything's okay. That the kids aren't having a deathmatch, and everyone's in tears,

because she never shuts off.

Because the minutes when she’s taking a break, running an errand, walking away, time is tick, tick, ticking by, and all she’s thinking about is what still needs to get done--the packing of lunches, signing of permission slips, the afternoon entertainment, ALL OF IT.

So when people tell her just to take a break and relax, she laughs to herself: gosh, if only it were that easy. Because even when a mother physically steps away from her children, mentally, she can't help but think about them, their well-being, and everything in-between.

She’s found release in walks and moments,
but motherhood's a huge responsibility.

And her partner may work out of the house, and it's her job to keep her children alive and well, and there's only one her.

Or she works, and in-between work tasks, all she does is think about the mental load.

So no matter where she is, she can't will that mommy mode quiet.

As hard as she may try,
that voice is her most powerful one because
It cares too much to shut off.

And as exhausting and overwhelming as it can be,
her mind will always be with her children,
and she wouldn’t want it any other way.

This is why moms are the last to go to bed or the first ones up
​I can’t stop thinking about the woman alone in the delivery room
When it comes to moms, don’t ask--do.
advertisement

This is why moms are the last to go to bed or the first ones up
​I can’t stop thinking about the woman alone in the delivery room
When it comes to moms, don’t ask--do.