Mom, On The Edge

Published by manvsmommy on September 19, 2015 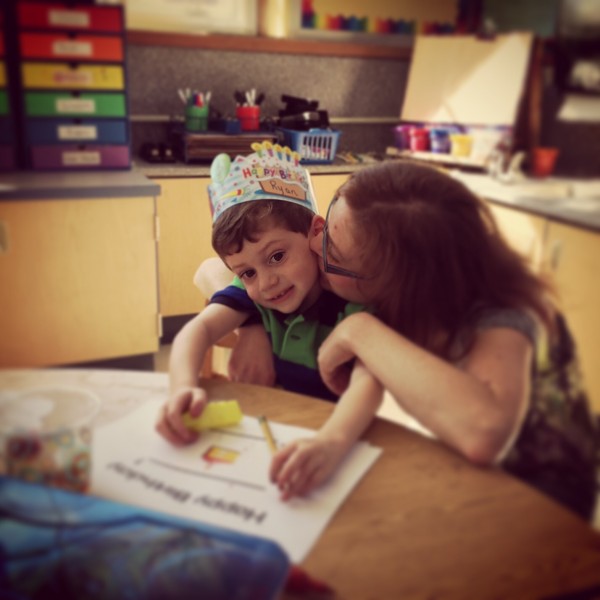 "Why don’t you find a support group for moms of kids with special needs?” asked a good friend today.

“I don’t really think I fall under that category,” I immediately said, somewhat exasperated.

I could see she was debating going further, but she didn’t have to. I immediately flashed on his new therapy schedule: S.E.I.T ten hours per week, occupational therapy twice weekly, in-home family behavior training once a week. There is no denying it; he does have some special needs.

Since day one Man has been both amazing and overpowering. By six months we had gates up and locks all over our house. By nine months he wasn’t yet walking but he was climbing—on everything—and then sliding down. At two, when all of our other friends were taking their gates down, we were upping the ante. I still hear parents say things like, “Bobby had no interest in ever opening our cabinets; I never had to baby proof.” I just don’t understand that. Currently, we STILL have locks on every cabinet, and often pay the price if we forget to secure them.

At three he very rarely stops moving, and even when he is “sitting still” there is near-constant movement in his little body, be playing with his toes or just banging a toy on the floor. He requires an excessive amount of sensory input. He will dump cups of water out on the table regularly, just—I assume—to feel the water on his hands. Adding to this, he has an insatiable curiosity and intelligence. Many times, his need for stimulation mixed with his curiosity will drive him to do dangerous things. Just today, I went to open the refrigerator and within seconds he had picked up the knife I had just laid on a cutting board. He had decided he was going to “help” me to cut the carrots. Despite understanding that he is not allowed to do such things, he will continuously do them. His actions are never ever done out of malice; he truly just can’t help himself. The bottom line is that we really can’t take our eyes off of him, ever.

These last three months have been overwhelming. Man has been having difficulty following the structure of the classroom environment and something had to be done. This, to me, was almost a relief, as his in-classroom behavior mimicked most of the behaviors he has been displaying at home. The behaviors that have simply exhausted me.

Through our state and county, he qualified to participate in psychological, special education, and occupational therapy evaluations, a standard battery for children displaying this type of behavior. And although they all began with, “Man is a very intelligent three-year-old boy…” the final reports were peppered with words and phrases such as poor attention, low impulse control, hyperactive, and sensory seeking. I felt my heart race as I read the “at risk for” section, since those contained the scariest words of all: anxiety, depression, withdrawal, etc. This was my sweet, social, happy, delicious Man they were talking about! How could he be at risk for withdrawal—he could talk the ear off of the neighbor’s cat! I’m not entirely sure I finished reading all of the reports, but I’m positive that I cried. It wasn’t that I was surprised—I know who my son is—but seeing it written in black and white made it so much more real.

He began therapy services, provided by our state/county, a few days later. He has a S.E.I.T (Special Education Itinerant Teacher), a special educator who is with him in the classroom for two of the three hours he is at school every day. From what I am told, and even from what I see, it has already been extremely helpful and he is learning a lot from her. But now, every day, I get to hear about what went wrong that day. Was he “good” or did he make “poor choices?” I don’t want to be in the dark, but you have to understand how difficult it is to hear about your son’s negative behaviors day in and day out. I hear all of the positives too, but nonetheless it’s emotionally draining.

We have in-home family behavior training once a week to teach us strategies to best manage his type of “personality”. She wants me to use behavior charts and stickers to help improve his morning routine, etc. I know that ultimately it could help, but right now all it seems like is another thing to have to remember to do each morning. Now, we are learning to be ever mindful of our verbiage, the way we present information to him, the way we have to moderate if he is having a difficult day. Again, ultimately it will help, but it’s a lot of adjustment to execute all at once. I feel inundated and a bit lost, swimming in information and change while still trying to cope with Man himself.

I am about to say something that a mother is never allowed to say, to admit to anyone, or even to feel: in many ways, Man has left me feeling empty. DO NOT think that this means that I don’t love my son. Like most of you would do for your own, I would lay down my life for him without even thinking. In fact, I believe it means the exact opposite—that I have loved so much, worried so deeply, and worked so hard for so long to help him that I just don’t have anything left. Most days, I barely have time to clean up that spilled water before he is off again, smashing at the TV with his toy golf club or opening and systematically emptying the refrigerator. My senses have to be heightened at all times and it leaves me feeling emotionally, physically, and mentally drained at the end of a day.

Mostly, I feel A LOT of guilt. I am a mom on the edge when I should really be tough, strong, and resilient. Lately, my patience is thinner, my tolerance lower, and my moods more erratic. All moms have a reserve, and mine feels empty. I don’t know when it ran out and I‘m lost on how to replenish it.

I know that this too shall pass. We will find our stride and get into a groove with new behavior strategies, therapy schedules, charts, and stickers. In a few months, this will be our “new normal” and I will return to my perky, snarky self. Therapies will start working and maybe, just maybe my sweet little Man will start thinking twice before dumping that cup of water. It doesn’t matter. He is my love, my life, and I will continue to be there for him through thick and thin, all fueled up or stalled at the side of the road.

The Day We Told Our Adopted Son About His Past
When Your Child Won’t Stop Acting Out
Would I Change Him?
advertisement

The Day We Told Our Adopted Son About His Past
When Your Child Won’t Stop Acting Out
Would I Change Him?