Make Dad Happy This Father's Day ... With a Donkey! 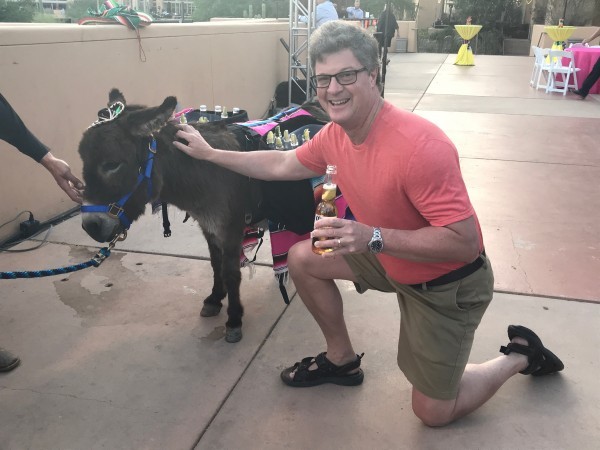 The author with his dream Father's Day gift

Another Mother's Day is in the books, which means dads nationwide can begin preparing their "perfect day" wish lists. My Father's Day requests always include the phrase "multiple, uninterrupted naps."

This year, however, my desires will also feature an item that, if my wife relents and purchases it, will catapult me into the "cool dad" stratosphere, should such a galaxy exist. Fellow dads in my 'hood will flock to me like the preteen all the other kids yearn to hang out with, not because of his personality but because he owns a treehouse. Every weekend my phone will blow up with texts, all asking the same question:

I am referring to the latest craze in beer dispensing — a four-legged pack animal carrying two saddlebags that become coolers when filled with ice and a 12-pack of suds. Beer burros, also known as beer donkeys, are fast becoming the rage at weddings, corporate events and themed parties. I recently encountered my first such donkey at a Cinco de Mayo bash thrown by a financial services organization.

"I've even been asked to go to golf courses and have the donkey follow the guys around as they golf," said Tia Cook, operations manager at Walking M Farms in Higley, Ariz. Besides providing petting zoo animals and pony rides for kids, Cook owns four mini-donkeys, each weighing between 275 and 300 pounds, that will stand at attention for up to two hours as party guests help themselves to beer, tequila shots or whatever beverage is stored in the donkey's panniers.

"We've served juice boxes and water too," said Cook, stressing that beer donkeys can be altered for kids' parties.

I just want one at the ready after I mow my lawn.

I won't dress it in a Mexican sombrero, western bandana or other attire Cook's donkeys wear, depending on the event. And I promise to love it unconditionally, provided it faithfully does its beer donkey duty and keeps me from having to unfold myself from the couch and amble to the kitchen each time I want a cold beer. For years, I've tried to train my dog to open the refrigerator and fetch one for me, but that behavior only exists in Super Bowl commercials.

The donkey would be my salvation.

"So, what do you think?" I asked my wife. "We've got plenty of yard space. I'll even clean up the donkey poop. Seems a small price to pay."

"Speaking of price, exactly how much is this Father's Day gift?" my wife asked.

She cut me off. "I'm guessing you're getting barbecue tools for Father's Day."

Undeterred, I offered to share the animal. "When your girlfriends come over, you can turn it into a chardonnay donkey," I said. "Or a strawberry daiquiri donkey. How does that sound?"

"It sounds like you've had a few too many of what you want the donkey to carry," she said. "Besides, I think it's cruel."

Cook insists she rarely gets complaints from party guests who feel carrying beer is an inappropriate use of the donkey's time. "Most people want to love on them, take pictures with them and ask questions," she said. "They get interested in what they are and where they come from. And donkeys are bred to pack."

She added, however, that she does get the occasional "May I touch your ass" comments from partygoers who all think their attempt at humor is original.

"I've had people ask if they can take (the donkey) back to their hotel room, which sounds a little weird," Hill said, adding that she has declined those requests.

I have a month to convince my wife the donkey will be a welcome addition to our family. It will be a tall task but not nearly as difficult as trying to teach my dog to use a bottle opener.