Look Up! You're Missing It 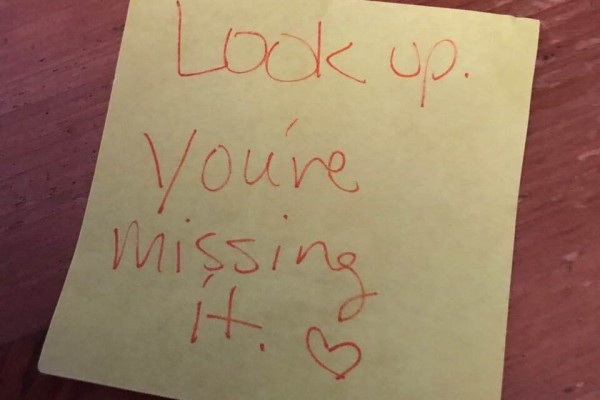 I went to dinner with my family at a local restaurant. We were enjoying our meal and one another’s company when I was distracted by the people at another table. I really wanted to butt into someone else’s life and it wasn’t because they were loud or obnoxious.

Two men were seated at a table by the wall. An older gentleman (I’m going to call him Joe) was facing me at a slight angle and his dinner partner (let’s say Jack, to simplify) sat across from him and I could see part of the side of his face. Joe looked to be in his 70s while Jack appeared to be in his late 20s or early 30s. I made the assumption that they were grandfather and grandson. Maybe father and son.

I made a lot of assumptions during this dinner.

As I talked with my family I noticed that the men didn’t talk at all. For at least 20 minutes Jack never even looked up from his phone. Several times, I saw Joe look intently at his younger tablemate, as if he wanted to say something, but there was no returning gaze, no comment. Not even a glance up from the device he seemed so captivated by.

“I want to go and tell him to look up,” I told my husband while my boys were busy giving each other grief the way brothers do over french fries and cheeseburgers.

“I could have the server deliver a note. He’ll never know where it came from,” I couldn’t let it go. “Honey, look. He’s missing it.”

We looked over again and Joe was again looking intently at Jack, who was still busy clicking away on his phone, seemingly oblivious to everything around him.

I looked back at my sons who were delightfully telling inappropriate jokes, like boys do until Mom notices, and was so incredibly grateful for them and so unbelievably sad for Joe and Jack at the same time.

My husband was right. I didn’t know the whole story.

I didn’t know their relationship. I assumed they were father and son, or grandfather and grandson, because why else would they have been eating together? But I didn’t know why they weren’t speaking. I can assume Jack was being thoughtless and selfish. I can assume Joe just wanted to talk and spend time with Jack, but it I didn’t really know. I could only observe.

I could have been wrong. They could have argued before I noticed them. Joe could have been terribly judgemental of Jack and that caused him to shut down and hide in his phone. Or maybe Jack was doing Joe’s taxes. On his phone. During dinner. I didn’t really know what was happening.

Maybe this was their first dinner together, the first step, after a lifetime of abandonment by Joe and Jack was still bitter. That would be understandable, right?

Or maybe they didn’t know each other at all. Maybe Joe is a Federal witness and Jack is his protection duty. Jack was only on the phone, a burner phone, because he was making an exit plan to get them both out of town alive so Joe can testify.

But, out of my assumptions, came the overwhelming feeling that if I was right, Jack was missing it. He was missing his chance to put down his phone and talk to Joe.

He was missing the opportunity to be in a relationship with family. To learn from someone who’d lived a lifetime already and had the richness of experience and wisdom to share.

Why did he come here if he was going to ignore this sweet man across the table?

Again, I was assuming.

Was he a sweet man? I didn’t know. All I could do was observe the look in his older, wiser eyes and the disappointment on his face when the meal passed with no words spoken.

They sat like strangers until the check came. Then, Jack set aside his phone to settle the bill.

Finally, he looked up.

And I hid the note I’d already written in my purse.

My opportunity had passed.

In my mind I knew it was for the best that I didn’t butt into a situation I really knew nothing about, but in my heart I was sobbing. I was deeply saddened for Joe and the hurt I thought he must be feeling and I was even more upset for Jack at all that he had lost tonight without even knowing it. The opportunity to give and receive love and human connection sat across a dining table from him for the better part of 90 minutes tonight and Jack ignored it.

He missed it completely.

I looked across my table at my three boys. I looked at my husband sitting next to me.

Even though my eyes were a little watery and my heart hurt a little for people I don’t know, I was happy and thankful.

I didn’t miss anything. I’d had a great evening of laughing and talking with my family. My husband and I, just by having a normal dinner with our kids and engaging with them, were making sure we wouldn’t miss it someday when we are Joe and the kids are Jack.

Because we are looking up.

*Share with your loved ones and follow Mama Needs a Nap by Lauri Walker for more fun and stories. Just maybe not during dinner.*

Lauri is a Mama of four, thrives on a deadline, and LOVES her caffeine. Her husband is her best friend and partner in crime. She loves to write about the crazy things her kids do. Hopefully, they won't hold it against her when they're all grown up!

The Person
The Person
A Very Big Table for Autism
advertisement

The Person
The Person
A Very Big Table for Autism