I Carry Them With Me, Even Though They Are Gone 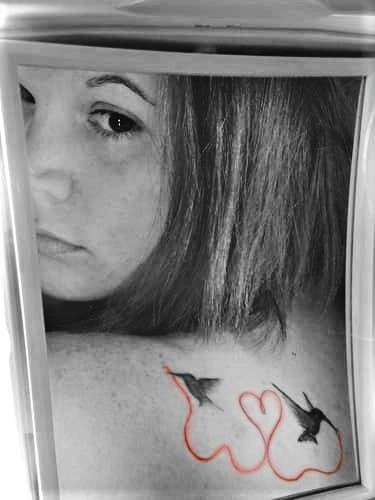 Photo: My favorite piece of art, ever. For my sweet Bayley and Sawyer LeBoeuf.

For some, they are butterflies - floating delicately from the spring blossoms and graciously flying away while leaving a glimmer of remembrance for a life that could have been.

For others, it's coins found on city sidewalks or underneath couch cushions, believed to be tokens left by tiny angels that left far before their time.

For me, it's always been hummingbirds.

With wings that flap anywhere between 10 to 80 times per second, that carry the tiniest of creatures into your line of site so that you have just enough time to soak in their beauty, before they are off onto their next journey or onto what we imagine is a better place.

Quickly in. Quickly out.

That's how it feels to love a baby that you fell deeply, inexplicably in love with and lost just as quickly.

Some call it miscarriage.

Some call it pregnancy loss.

Some call is "not the right time" or "something was wrong."

But for me, and millions of other women that have suffered this unspeakable pain, it's just called a nightmare.

I've always love hummingbirds. But, since losing my 2nd and 3rd pregnancies in 2015, between my two full-term babies, I've fallen in love with the tiniest of our feathered friends.

To me, they represent something beautiful among the worst pain of my life.

To me, when I catch the first sound of the bee-like buzzing, and turn my head just enough to see them drink the nectar I've made myself, it's like seeing an angel.

To me, they are my Bayley and my Sawyer checking in on their mama's broken heart.

Just a little reminder that somewhere I have two beings that were a part of me and my husband. Two other beings, not the two boys I've had the privilege of loving here on Earth, but two souls that were also mine, even if for a brief period of time.

It's October now, the hummingbirds have started their southward flight towards Mexico, so I won't see them again until early May, but they always remain in my heart.

They carry a red string that represents my fragile heart, that will unravel if they should fly away. But, the ink is dry on my alabaster skin. The pain of the needle was nothing like the pain of losing them both. So, here they will stay until the end of my life. Until my skin is old and grey and is burned in the hottest of fires. But, when my birds disappear and my ashes are gathered, I will truly be blessed. Because I will be among my little hummingbirds, my angels, my babies, once more.

Until the day I no longer have to carry them on my skin, but can fly with them where the winds take us, I will continue to live a life among hummingbirds.

By Britt LeBoeuf of theseboysofmine.com

Twin brothers 60 miles apart but reunited 55 days later
They say angels exist, but only in heaven. They're wrong.
Stretch Marks of the Heart
advertisement

Twin brothers 60 miles apart but reunited 55 days later
They say angels exist, but only in heaven. They're wrong.
Stretch Marks of the Heart