Life's Not A Race

A friend told me recently that life is not a race and I felt a bit sheepish as I realized she was right. I had encouraged her to chase her dreams and as it is my nature, wanted her to jump in with both feet. She was left feeling pressured instead and despite my best intentions, my advice was not right for her. She kindly told me that her style was not like mine and she wrote a story essentially detailing that life is not a race. Wow.

She's right, you know. I have never considered myself particularly competitive. After all, I was the youngest of five, my brother and three cousins who lived two doors down. I never ever won games, Marco Polo, checkers, hide and seek, Donkey Kong, you name it, I came in last every single time and funny enough, it really didn't bother me. I think I was so glad to be included in their shenanigans that being a part of the game was good enough for me. Suddenly, I was aware that perhaps I had changed and maybe not for the better.
Life's not a race. She's right, it's really not. Sometimes it does feel likes it's racing by me though and perhaps my struggling to keep up has been a mistake. I have spent this summer immersing myself in the moments. Moments of mess, chaos, loud, meals, laughter, yelling, and even the waves of emotion- all the energy that flows with four children who wander indoors with sandy feet, plop on couches in wet bathing suits and pull away from the mother who slathers sunscreen and makes sandwiches, while ordering towels to be picked up and beds made. Though our days race by, I am trying to slow down and I think, just in time.
Amos. My fourth child. My darling son with his extra special needs relishes the siblings as I remember doing with my big brother and three older cousins. If they run to the pool, he is running behind them, stumbling in the thick green crabgrass, squealing when I call for him to stop and laughing as he tries to escape my grasp. He joins in their antics occasionally but is the observer more often and sometimes they overwhelm him and he finds mama, his safe place. His brothers and sister lather him with affection and when they get too close to me or him, he will shout his version of "move!".
His sister longs to have him adore her and so, she strives to touch him, help him, bring him snacks, anything to win his adoration. On one evening recently, we went to the playground; it wasn't quite dark and the heavy heat had lifted its' lid with the impending sunset and so, we played. Shevans Park is an amazing playground, a wooden fortress of mazes and slides, steps and ramps. A bit difficult for Amos to navigate and so, Blair took it upon herself to try to lift him up one of the wooden platforms and he protested his annoyance.
When I mildly scolded her to leave him be, she protested and said, "But, he's slow!"
I was dumbstruck. I was embarrassed. I felt a wave of protection for Amos wash over me as well as empathy for his sister. For me, I felt shame. In an instant, I thought of the phrase "life's not a race" and I was back in the moment. "He is slow," I told her. "He will likely always be a bit slow but that's okay because we are not in a rush. Life's not a race."
I was reminded to slow down. Slow down with my expectations of this one life I have been gifted, this amazing game we call life and though it flies by, I don't have to chase it. I can take my time, observe and ponder, love and be loved, and in the end, the finish line of my life will only be crossed by me. How I played the game is what they will remember, nothing else. I am thankful for reading the words of a friend and hearing the words of my only daughter, both equally important in realizing the path I have followed or rather, should follow. 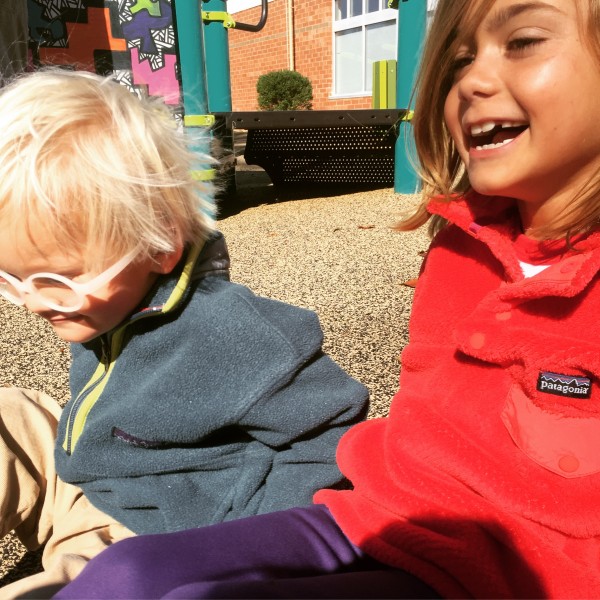 Life's Not A Race
Life's Not Fair
​School Conference Day