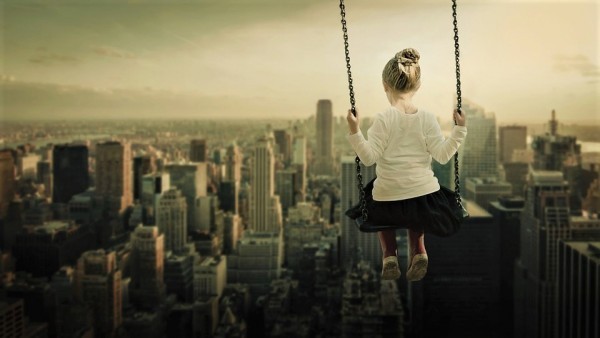 The playground. A haze of juice boxes, scrapes, screams, giggles, and chattering parents. It's a buffet of varying parenting styles and personalities.

And then there's my child. The "shy" child.

The playground has been our sanctuary since my daughter was a baby. It started out as just somewhere to go but it ended up playing a very important role in my child's social development.

From the time she was 2 years old until about 4, my daughter was extremely shy. I'm talking hiding in a corner and covering her face when friends or even family would try to speak to her shy.

And then there were the birthdays. For some reason, whenever anyone sang happy birthday to my daughter or we went to a party where this song was being sung — she would scream bloody murder and ruin the whole thing. It became so stressful that I avoided birthday parties altogether for a period of time.

It was embarrassing. It was frustrating. It sucked.

On top of this struggle, the unsolicited comments from people about how my daughter must be autistic or have Aspergers because of her refusal to make direct eye contact when she was shy was incredibly difficult to digest.

Our pediatrician had no such concerns. She was just very shy.

So I persisted with the playground trips. I thought it would help. We went twice, sometimes three times a week. It became our ritual. My daughter wasn't in daycare or school at the time, so the playground was her place to learn how to play with others, share, and have conversations with kids her own age.

At age 4, my daughter went to preschool. The first few days she was in her impossibly shy and difficult mood. I worried again.

And then it clicked. After the first week of preschool, my daughter completely changed. She was happy, outgoing, and making more friends. She was still slightly shy at times, but not like before. Now she was thriving.

The rest is history, really. She's confident. She loves life.

Now when we go to the playground she runs up to every child there and asks them to play. The change is like night and day.

So what's my point here?

My point is that ever since dealing with my child's behavioral challenges, I often find myself running into other parents experiencing the same issue. They're scared and they're worried because their kid is "too shy" or "won't play well with others." I feel nothing but empathy because I've been there.

The main reason these parents feel so much anxiety is not just because it's incredibly hard dealing with a small child who won't leave your side or make friends, but because other people in their lives — including their own friends and family members — have shamed them for their child's behavior.

They've had to hear comments like, "What's wrong with him — is that normal? Maybe you should have that checked out."

Quite bluntly, to those who make comments like this — maybe it's none of your business and perhaps you should keep those thoughts to yourself.

The lesson is that you truly never know what a parent is going through privately. You need to remember that every parent has problems and they're already dealing with a hell of a lot already without your unwanted input piled on top.

Now, if a parent asks you for advice — by all means have at it. Otherwise just zip it.

In general, most parents are fully aware if their child is not behaving the way they "should" or not developing in a "normal" way and — most likely — they're already on top of trying to figure out a solution. Most likely, they’re losing sleep over it many a night.

In my case, my daughter was able to recover from her "shyness" and move on. Some kids don't. Some kids do have problems that may need treatment.

But that's none of my business.

Luckily for me, we just needed a playground and some time.

More from Michelle: 6 Life Lessons I've Learned As A Stepmom

When Your Child Gets Picked Dead Last
Surviving Kids' Birthday Party Drama
The Kindergarten Debate: Is My Child Ready Or Should She Wait A Year?
advertisement

When Your Child Gets Picked Dead Last
Surviving Kids' Birthday Party Drama
The Kindergarten Debate: Is My Child Ready Or Should She Wait A Year?