Latina Moms Have Postpartum Depression, Too 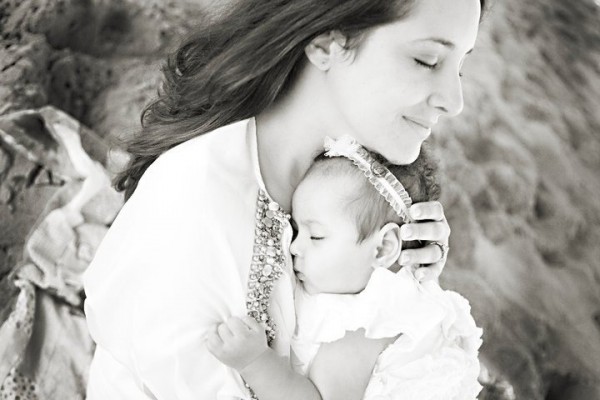 Over 30% of Latina moms suffer from PPD. So why did I refuse help?

I knew there was a problem when the crying wouldn’t stop. I had given birth to a healthy baby girl via c-section, despite a normal, even easy, pregnancy and the feelings of failure morphed into emotions increasingly hard to shake.

When my daughter was ten days old, she breastfed as I sobbed, overcome with maddening love that prompted insecurities, guilt and sadness. Though my body focused on healing from the physical demands of new motherhood, tears shed light to all the fears I held inside my mind: those that questioned our society’s ability to accept ​my biracial daughter, created from a loving, interracial marriage; the responsibility to pass down my culture and family’s language; tremendous worry for her safety and promises of self-sacrificing dedication. As my ten day old baby fed from my breast, I even cried for the stress of planning her first birthday party. I welcomed the gravity of motherhood – as a Latina mom to a multiracial child, no less – but I continued to cry and cry despite life’s greatest gift cradled in my arms.

The irrational intensity of that moment (and others that followed) remains pivotal to my early motherhood because it’s when I realized, with certainty, that my “baby blues” – approximated to affect 80% of women 2-3 weeks after giving birth - was very likely Postpartum Depression. My professional years as a social service provider further prompted my awareness as I continued to show symptoms of PPD, which can include mood swings, irritability, loss of interest in activities, intense feelings of sadness and/or anger, decreased energy and the preference of being alone. Though PPD symptoms can be difficult for a new mom to discern because of the adjustment to life with baby, I knew things were not in balance with my hormones and psychological state. I knew that Postpartum Depression was the reason my days were filled with nonstop tears, irrational fears and stress beyond my control.

So why did I refuse help?

For the entire first year of my daughter’s life, I suffered with PPD in silence. Confiding in no one, I met with a general practitioner who prescribed an antidepressant. I voiced my reluctance, asking for holistic alternatives, showing signs of deeply ingrained, cultural beliefs and was five steps out the door before I ripped the prescription into pieces. I never returned to her office. Despite my education, though my advice to clients has always been to seek and accept help, I denied myself the same benefits.

Factors such as socioeconomic status, education and acculturation impact the various ways Latina moms deal with postpartum depression, but I learned not to underestimate the overarching cultural implications, either, regardless of how many generations your family has been in the United States. Mental health stigma in the Latino community continues to exist and permeate to our experiences as mothers. And despite over 30% of Latina moms suffering from depression surrounding child rearing, PPD symptoms are often attributed to behavioral ailments within our control versus biological occurrences. Further magnifying the issue is the mother’s role in the traditional family being a natural transformation with a sacrificial perspective towards child rearing.

For me, once we finished breastfeeding and my hormones leveled, as we all began to get more sleep and fall into a routine, my PPD symptoms subsided. I’m a sensitive person by nature, but my days began to be filled with more light than darkness. More hope than fear. More love for the beauty of motherhood, rather than fears of the magnitude of it. Two years later, when I got pregnant with my second child, I expressed my concerns with loved ones and medical professionals in hopes of preventing the same experience. Having a supportive foundation really makes a difference.

If she chooses to become a mother, I’ll tell my daughter this story, too. I’ll tell her that while Latinas are passionate, strong willed and capable of anything, we sometimes get Postpartum Depression, too and that getting help doesn't make us less strong... or Latina.

To learn more about Postpartum Depression and facts, visit Postpartum.net.

A Latina mom in an interracial marriage, Vanessa is the founder of De Su Mama, a community of multiracial mothers. Focused to support our unique perspective, Vanessa's award winning blog celebrates the nuances of raising multiracial children.