Kids, Just in Case You're Trying to Sneak Liquor Into My House... 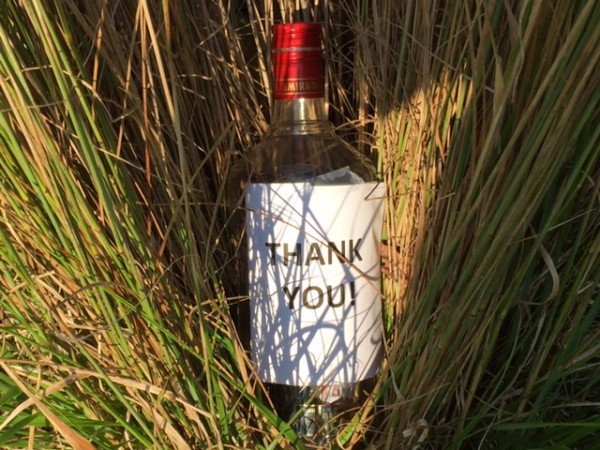 My backyard was recently the site of a party for nearly 100 high school freshmen. Which is a nice way of saying "a swarm of hormonally charged teens."

Prior to giving the OK we asked my daughter, the party’s hostess, if she was prepared to lay down the ground rules. Sadly, stories were already circulating among parents of alcohol’s presence at similar gatherings. She requested we not use Solo cups, fearing the appearance of law breaking via social media photos. And when her invitation included the phrase “NO BACKPACKS!” it was clear she had received our message.

“OK, so nobody can sneak anything into the party. We’re good, right?” I asked my wife.

“As long as you check the bushes that morning,” she said.

“What am I checking for? Possums?”

“I’ve heard kids come by the night before and hide bottles in the landscaping.”

Ingenious, I thought. “Cretins,” I said.

I arose early the morning of the party, regaling in my new role of sheriff’s detective/private investigator/U.S. marshal/attorney general. I pulled back ferns, lifted pine branches, pricked myself on rose bushes, terrified a slumbering rabbit and found a pair of reading glasses I’d lost in May. I found no bottles, cans, travel mugs or “sunscreen.” The latter, incidentally, is very popular among kids, who fill what appear to be sunblock tubes with the liquor of their choice.

I reported the lack of evidence to my wife and expressed my disappointment.

I handed her the paper I’d typed the night before and planned to affix to any containers I found. After emptying them, of course.

Dear Schwem partygoer: Thank you for this wonderful gift of (insert liquor brand name) that you must have unknowingly dropped upon your arrival. I assume it was intended for me since it is customary to bring the host a gift when receiving a party invite. Next time call, text or Snapchat me (yeah, I’m on Snapchat!) and I’ll let you know what brands I prefer. I’ve been partial to Michelob Ultra this summer, as it’s low in calories and I don’t need to drag around extra weight. Do you know how exhausting it was to prepare my yard in 90-degree heat so kids like you could have a nice safe place to eat, dance and socialize before starting high school?

Speaking of high school, let’s talk about your future. Since you are already consuming adult beverages, have you pondered a potential career? I suggest you shun anything that requires logic and decision making, considering you’ve already been outsmarted by someone thrice your age. (Google “thrice definition” and do some basic multiplication to calculate how old I am. Incidentally, math is easier when you’re not hung over. Remember that prior to your first geometry midterm.)

I can’t think of any occupation that welcomes making one stupid decision after another. Not sure where you'd send a resume with a ‘special talents’ section that says, ‘I enjoy challenging authority.’

My point is, you’re going to need a job, and quickly, if you plan to continue buying liquor. Do you know what a single beer at Wrigley Field costs? It’s $8.75, dude! True, $7 of that probably goes to paying Jon Lester’s salary but you might as well learn early of the economics of alcohol consumption. Think about that the next time you give your hard earned money to an older sibling and ask him or her to buy you a bottle or six pack of whatever.

Sorry to be so long-winded. By now you’re probably just skimming this note, so bummed in the realization that you will be attending my daughter’s party booze-free. Or not at all, if you choose to leave now. I hope you will stay, for I’ve included plenty ‘of age’ appropriate activities at my own expense. You’ll also score some serious points with me if you offer to help pick up trash afterward.

No need to clean up behind that tree. As you know, I’ve already checked there.

Forget Millennials. Here's to the Parent-ials!
Welcome Home From College. When Are You Going Back?
A letter to the woman who gave me my daughter: 'When we talk about hard things, we talk about you'
advertisement

Forget Millennials. Here's to the Parent-ials!
Welcome Home From College. When Are You Going Back?
A letter to the woman who gave me my daughter: 'When we talk about hard things, we talk about you'