Kids Are the Gifts That Keep On Giving 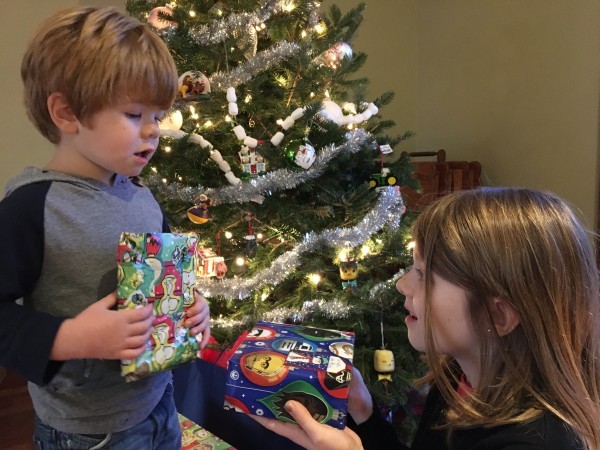 My children are gifts that keep on giving.

With each passing year, there's a tearing away of the parts of their lives they've outgrown, leaving me no choice but to stow away what's been left behind in my memory.

It can be hard, and sometimes a little heartbreaking when their past selves are left in the dust and the current versions of my children are unwrapped.

As each layer is peeled away, a little more innocence is lost. A little more attitude is revealed. Beloved toys and interests are set aside. There is more separation and less snuggling. Their tenacity—which is putting it nicely—and stubbornness and refusal to listen to ANYTHING I say can be completely defeating. Sometimes, when they're disobeying or disrespecting, they don't actually seem like the gifts they most certainly are.

And sometimes I miss who they used to be.

Smaller. Sweeter. With their chubby cheeks and thighs. With their baby smiles and bodies that could be cradled in my arms.

But within their still growing frames lie gifts that are still waiting to be opened. And as each new version of my children is unwrapped, something beautiful is exposed.

Growth. Change. Knowledge. Wisdom. Capability. Independence. And always, always laughter, joy, and so much goodness in the midst of it all.

Each time a layer of their former selves is torn away, a brand new part of who they are is exposed, and it's always a surprise to finally see what's been hiding underneath each one. While it can be sad to put the gifts of the past behind us, there's an exchanging of something old for something new and more complete.

So much of their lives has already been unwrapped. But so much more is waiting.

And I can't wait to see the gifts they bless me—and the world—with next.

To Love & Protect a Child in a Digital World
No, Really. Your Children are Treasures
Six Ideas for Raising Happy Jewish Children
advertisement

To Love & Protect a Child in a Digital World
No, Really. Your Children are Treasures
Six Ideas for Raising Happy Jewish Children