Published by Bianca LeRoux on February 10, 2021

"You have to do it!" Karey shouted through the phone. I was driving to the grocery store

After dropping off my kids at school, I had fifteen minutes to call my best friend for advice. "You have worked for so long for opportunities like this; you can't say, 'no!'" As usual, she was right; I had been working for years as an actress on the indie scene in New York, and doing lame commercials to get someone in LA to notice me so I could start working out there as well and be a "bi-coastal talent." Working in LA even on small projects impressed industry professionals here in New York, and would lead to more opportunities on both coasts.

"It will be hard on the kids. I'll be away for a week if you count travel days." Since becoming a mother finding time to do anything was hard enough, but asking for a week away, even for work, felt like demanding the world turn the opposite direction on its axis.

"They'll be fine. Actually, they won't even miss you! They'll be with Nana, and she's cooler than you." True. Who needs Momma when you have Nana around? "You'll never forgive yourself if you don't take the gig, and you only live once." By the end of our conversation, and by the time I arrived at the grocery store, I was confident in my decision. I was going to take the job in LA.

The timing of the shoot worked out perfectly. Not only would I be able to spend a few days with my friends and family back home in Northern California while dropping off my kids with Nana, but I would also be able to attend my high school drama teacher's retirement party.

Friends from all over the world, as far as Kenya, came out for the party. Our teacher had shaped our lives as teenagers and still holds a special place in all our hearts. Karey and I organized to have a few of our core group from high school meet at a local restaurant after the party; we drank and ate REAL Mexican food (not the stuff you find here in New York) for hours, reminiscing and catching up. We told secrets about each other we had kept for years, revealed old crushes, it was one of those nights that stays in your memory as a "perfect night" for years to come.

The next morning I kissed my kiddos goodbye and handed my mom a folder of instructions, medical information, birth certificates, social security cards, and a letter I had written giving her permission to make emergency medical decisions in my absence. I was nervous about leaving but also very excited to start my drive down to LA to do something I had dreamed of since I was a little girl, star in a film in LA. It wasn't a big-budget blockbuster like I had initially dreamed of as a child, but standing there in the doorway of my childhood home, I knew "little Bianca" would be proud of "grownup Bianca."

A few hours into the drive, I was bored out of my mind. The I-5 is dreadfully dull; summers in in-land California don't see any rain, so I had been driving on straight freeways through dry yellow plains for hours. I checked the clock; 10:15 am seemed like a reasonable time to wake up your best friend on a Sunday. Karey answered the phone, groggily, "Hello." She croaked.

"I'm kid-free this weekend... You're a jerk!" She said through one of her hearty giggles.

"The worst." She validated. "So, when do you start shooting?"

We spoke for the rest of my drive retelling and reliving the night out with friends after the retirement party, filling each other in on life details we had forgotten to share because we're always juggling a million things and children. Finally, I had reached LA County and needed the GPS on my phone to help me navigate the insanity of LA traffic. We wrapped up our conversation by making plans to get all of our kids together the day after I got back to Northern California.

"Hey! Before you go." Karey sounded suddenly serious, "I'm really proud of you and can't wait to hear all about this experience when you get back. I love you."

The next few days were a whirlwind of rehearsals, costume fittings, and catching up with the team of filmmakers I had met at a film festival in Austin and now got to work with in LA. Tuesday morning, I arrived on set; a beautiful home in Altadena. I was greeted with smiles from the producers, head nods from the crew, which was normal behavior for crew members, they don't talk to the "talent" much, and a big hug from the director. It was a small crew, but I could tell this was different from anything I had done in New York from the moment I stepped on set. It felt normal, a well-oiled machine that did this work often. I worked on major TV sets in New York that didn't run as smoothly and calmly as this indie set in LA. The shoot was going well; we started with exterior shots on the back patio of this grand home. In between takes, I chatted with my co-star and snacked on the "Krafty" that had been bought with all of our needs and desires in mind. I was doing it! I was acting in a film IN LOS ANGELES. I allowed myself brief moments of excitement in my head, but of course, played it cool not to come across too eager or inexperienced.

I ran upstairs to my dressing room to check my phone. I hadn't spoken to the kids yet that morning and wanted to show them how beautiful my hair and makeup looked. They always love seeing Momma dressed up, and it doesn't happen that often. I grabbed my phone and saw seven missed calls, all from another one of my best friends, Jen, who lives in Guam. Seven missed calls? From Guam! My mind began to race. Jen is married to lieutenant in the Navy; maybe he had gotten hurt? Maybe she's pregnant? They have been trying for so long! Maybe? Maybe? Maybe? I knew my brain wouldn't let me focus if I didn't call her back.

"Thank you, 10!" I called back. I suddenly felt dumb, do we only respond that in the theater? I shooed my insecurities away and FaceTimed Jen in Guam.

"I'm on set for the film I told you about. I only have 10 minutes, but you called seven times."

"Girl, have we met? All I'm to going do is wonder what was so important that you called SEVEN TIMES? Tell me." I demanded, kindly.

"Fine. I just didn't want you to find out on Facebook, and it's already spreading like wildfire." The tone in her voice was cold, but her coldness was not directed at me. Her delivery was raw in a way that indicated dread for what was about to escape her mouth. "Karey died last night."

All the air left my body as if a vacuum had been inserted directly into my lungs and turned on full strength. I collapsed. Everything around me blurred, the sounds, my surroundings, I was on the floor, yet I felt like I was floating in something thick and warm.

The muffled voice of the AD came from downstairs, "Back in 5!"

I don't remember the rest of the shoot. I know I did it. I know everyone was happy with what we created, but I can't remember a single moment. I remember the drive home. I took the 101 up the coast, with all its beautiful views. I ate fish tacos. I bought lavender and honey at the Lavender Festival in Ojai. I somehow took my time while also speeding home to my children. When I arrived home late that night, I snuck into the bed my kids were sharing in their overly decorated room in my childhood home and snuggled in-between them. I smelled their hair and kissed their faces gently, not to wake them. I held them tightly as I cried quietly and finally fell asleep.

The following days were spent speaking to Karey's family and our close friends, trying to make sense of what had happened. All we knew was that she passed in her sleep, and her nine-year-old daughter found her in the morning. The paramedics assumed it was her heart. My best friend, who had survived aggressive breast cancer, a cheating spouse, a nasty divorce, and a lifetime of trauma inflicted by alcoholic parents, had died in her sleep at the age of 37. It didn't seem fair.

I struggled to find peace with Karey's passing. Some days I was overtaken with grief and loss. Other days, the sadness found its way to the surface for only a few minutes before passing through me. I checked on Karey's mother regularly for a while, to make sure she's wasn't alone and saw her grandchildren as often as possible. One afternoon while we were texting, she sent me her final message followed a hashtag, "I love you, honey. #KareyOn." I broke down and cried. Never had I imagined a hashtag would affect me in such a way. How silly and ridiculous. But it was true, and it was time. It was time to carry on without her. That's what Karey always wanted for the people she loved. She wanted us to live our lives to the fullest and take every opportunity that came our way.

I miss her every day. I struggle with the guilt of grieving: Guilt that my energy and focus should be on my children but my mind wanders, I can be irritable, or sad suddenly when one of "our" songs comes on the radio. Guilt because I took her, and probably all my other friendships for granted. Not selfishly or cruelly but naively, the way one takes life for granted when they've never been faced with death. Karey had beaten death, depression, and abuse. She had survived, therefore, she never took life for granted. Her passing has taught me to appreciate the small things in life while still striving for my goals and dreams. You only live once, #KareyOn. 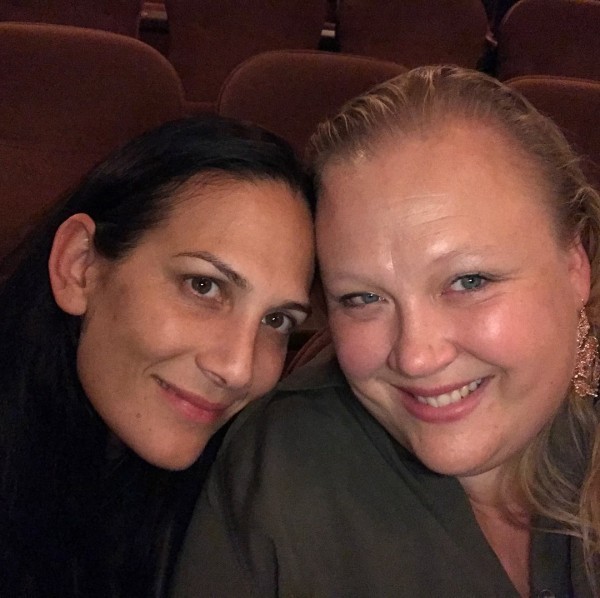 "Mommy won't sit down." A seven-year-old's comment lead to her mother's snarky response (and a lesso...
Memories of Family Past
The Dance
advertisement

"Mommy won't sit down." A seven-year-old's comment lead to her mother's snarky response (and a lesso...
Memories of Family Past
The Dance