Is It Safe to Become a Grandparent? 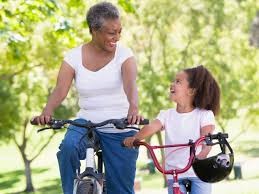 I did it again. I clicked on a medical study. Every time I do that, I end up abandoning a favorite food or, in this case, a lifelong desire.

I no longer wish to become a grandparent, for I will never be an expert at it.

Curse you, New York pediatrician Andrew Adesman, M.D. I know you meant well — I have yet to meet a children’s doctor who doesn’t — but that recent study you unveiled at the Pediatric Academics Societies meeting, the one outlining the potential risks of letting grandparents care for little ones, has only resurrected memories of my parenting mishaps. Now my children’s children may be subject to my erroneous ways.

True, Sudden Infant Death Syndrome is a serious threat to newborns, and I applaud you for correcting grandparents who feel it’s OK to position a sleeping infant on its side as opposed to the back. Ditto for remedying the belief held by some elder child caregivers that a good ice bath will bring down a fever when, in reality, it could cause hypothermia.

I just take issue with the quote about grandparents you gave to CNN: “We shouldn’t assume that, just because they’ve raised a child before, they’re experts.”

Experts? I don’t care how many child development degrees one has, there is no such thing as an “expert” in the crazy, constantly evolving world of child rearing. Whether you’re a parent or just someone in charge of children, the rules change daily: Suddenly it’s not OK to let kids pick random seats on the school bus, for doing so fosters bullying; the “high-dive” board at public swimming pools is now a legal liability as opposed to a summertime thrill; youth coaches, throw that scorebook in the trash. Don’t you know that keeping score at Little League games may cause the losing team to develop an inferiority complex? Jeez, parents, you should know better!

I started thinking about having children in the early ’90s, about the same time that safety was becoming the number one criteria of owning anything kid-related. Does that swing set have recessed, plastic-covered bolt heads? What about the car seat? It DOES have a five-point harness, right? What is this? An exposed electrical outlet? Cover it at once!

With all this safety knowledge stuffed into my already overwhelmed brain, I should have breezed through parenthood without incident, right? Wrong. Just ask my cousin, who once gave me the honor of placing her 9-month-old son in his highchair for dinner. While attaching the “swing-out” tray to the chair, I managed to also momentarily attach the little one’s pinky finger to the tray’s clips. The result was a three-minute wail from the boy and a look from my cousin similar to one given by a surfer when a dorsal fin appears nearby.

Fast-forward to my initial attempt to insert my own daughter into her first baby carrier featuring, according to the product description, color-coded buckles, ergonomic leg harnesses and safety “clicks” to “ensure you fasten the baby carrier correctly.”

I laid my daughter on the couch, assembled the numerous straps, placed her inside, began to lift the carrier to my chest and … watched her tumble back to her couch-laying position, although at a slightly different angle. Don’t freak out, readers, for she traveled approximately eight inches. Still, 20 years later, I haven’t shared this story with her, for fear she will use it against me.

“Dad, maybe I could have gotten that Ivy League acceptance letter if you hadn’t dropped me.”

Yes, there have been plenty of injuries I’ve inflicted on my children over the years despite numerous childcare classes I’ve attended and safety tips I’ve read online. These incidents included softballs that collided with noses during instructional pitching sessions, zippers that pinched exposed flesh when trying on winter coats, and even a brief, yet heart-stopping separation from my child at an outdoor music festival.

My point, Adesman, is to cut those sweet, loving and always available grandparents some slack. Yes, a refresher course in parenting is always a splendid idea and could quite possibly save a child’s life. But if you think parenting “experts” exist, then I’ve got a “maximum security” highchair to sell you. Featuring a swing-out tray.

Sometimes the bat breaks: Parenting through failures
It's Funny Being a Parent by Michelle Staubach Grimes (author of Where is Pidge?)
Adaptation: Learning to adapt in 2020 will build survival skills in your children.
advertisement

Sometimes the bat breaks: Parenting through failures
It's Funny Being a Parent by Michelle Staubach Grimes (author of Where is Pidge?)
Adaptation: Learning to adapt in 2020 will build survival skills in your children.