Published by Gail Cornwall on February 24, 2017 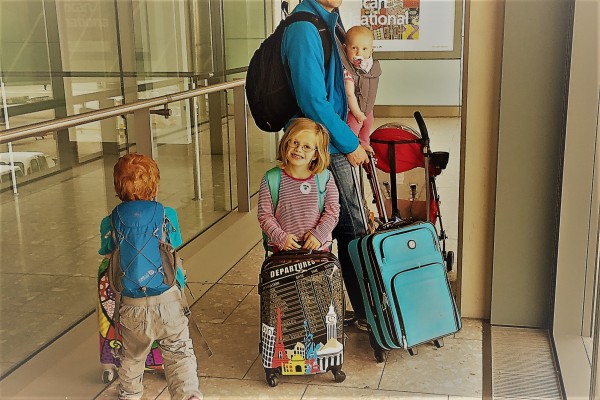 Life after birth often feels irreparably altered – mostly because it is. I now only swear in writing. Sleeping in finds itself sharing a category with slip and slides: things we remember enjoying when we were young. But one activity we’d presumed had gone the way of the lazy Sunday resurfaced. Travel! Not sojourning to the fancy children’s museum in the suburbs, mind you. Actual, international travel, complete with looking at historical things, eating interesting foods, and absorbing local culture.

Forced by two dear friends’ wedding and the promise of dinner and dancing in an authentic French castle, we undertook a trip abroad with a toddler. We left Seattle early in the morning using public transit to get to the airport, flew to New York, and caught a red-eye from JFK to Barcelona. We spent four days exploring Barcelona, rented a car, checked out Costa Brava, spent a night in Aix-en-Provence, stayed in a château in Aups for a week, and luxuriated in an afternoon and evening in Cannes. We then flew from Nice to Paris, Paris to Chicago, and Chicago back to Seattle. And we truly enjoyed ourselves. All three of us.

– Marketing: We talked about the airport in embarrassingly excited tones the day before leaving and en route. My husband and I feigned the enthusiasm we would feel for a full 24 hours alone in bed together with two extra-large, gluten-free pepperoni pizzas, a television, a New Yorker, three issues of US Weekly, and a Scottish time-travel romance novel. We maintained the facade even as I got slammed by a morning/motion sickness one-two punch on the train ride, stumbling out just in time to vomit off the side of the platform. We discussed boarding, pushing back, taxiing, and take off with similar ardor (e.g., “Oh my goodness! We’re going to walk down that long tunnel and then STEP ONTO THE AIRPLANE! Woooooooow!). The book Noisy Airplane Ride helped with inspiration ("Stomp stomp tromp, down the jetway with a grin, take a seat and buckle in").

– Space: We reserved an aisle and a window on domestic flights and the two center aisle seats on international flights. I then called the airline, explained that we would be traveling with a lap child and asked “are you sure there’s nothing you can do to help us, Kathy? Don't you have any discretion here?” I find the average customer service representative responds well to an implicit challenge to her authority. “I’ll show you, Mrs. Cornwall,” her rapid change in tone and newly efficient assistance shouted, “here’s exactly what you need! Didn’t think I could do it, did you?” After arriving at the airport, I told the same sob story to the ticketing agent while "absentmindedly" rubbing ye olde pregnant belly and confirmed that the seat between ours would remain “frozen” on every leg of the trip.

– Exercise and eating: In every airport along the way, we followed two rules. First, we encouraged the toddler to walk, run, jump, and dance through the halls like a devout Catholic sucks down a milkshake on the eve of Ash Wednesday. The play area in SeaTac and the Children’s Museum in O’Hare aided Operation Physical Exhaustion immensely. Second, we paid the exorbitant airport food prices. Our 18-month-old at that point had taken 31 flights (counting each leg separately). No matter how carefully we pack a mixture of her favorite snacks and novel ones, she always prefers recently purchased foodstuffs. Scrambled eggs from home? “No, day du.” Twelve dollar scrambled eggs from New York Deli? “Mmmmm.” A bag of previously untried chocolate chip animal crackers that I bought on sale last week? “No, day du.” An identical pouch at more than twice the price? “Hold dis? Hold dis? Hold dis? Peeeeeeeeeeas! Day du, Mama.” I guess I really shouldn’t be surprised; I feel exactly the same way.

– Make a bed: We politely declined the gate agent’s offer of bulkhead seats. The extra leg room does not outweigh the cost of enhanced visibility. Whenever we fly, we set out a few blankets on the floor, making sure to cover the metal bars. We march through nap and bed time routines as per usual – complete with outfit change, three books, and “singies” – and then lay her down in the space intended for my legs. She sleeps almost as long as she would in her crib since she can roll and otherwise re-position herself. Lowering our trays both dims her little area and conceals this non-FAA approved behavior from hyper-vigilant flight attendants. The method earns extra credit points for keeping our hands and laps free so we can read a book, fidget, and even use the restroom without disturbing her.

– Presents: My mom taught me my single most effective strategy. Before we flew, I trolled Ross, the pharmacy, Marshalls, and the Japanese dollar store for small, light, and intriguing items costing less than $5.00 apiece. Some of my most successful finds include: a tube of chapstick, a pack of five doggy figurines one of which appears to be rabid, several different wallets packed with old hotel key cards, a wind-up toy, and a box of Kleenex. I then wrap each item in tissue paper. Correction: I entrap each item in tissue paper, swaddling it with layer after layer of scotch tape. On the plane, every thirty minutes or so my daughter started to get fussy, was reminded that kids who stay in their seats and use their inside voices get presents, politely asked for her “peasant," gleefully shifted from bum cheek to bum cheek as I ceremoniously retrieved her backpack from under the seat, stuck her little paw into the atrociously princess-and-ruffle-encrusted $4.99 satchel, spent at least four minutes extracting her chosen present from the tissue paper wrapping, and played quietly with the new item for at least three additional minutes. We left home with about 30 presents ($45 well spent). The night before we left Nice we realized that our supply had dwindled to dangerous levels. No panic, no problem. Hotel shower cap, plus shot glass and change purse from the airport souvenir shop, plus TSA-gifted latex gloves equals one happy flier.

– Shifts: When she started to become a real handful, we alternated focusing all our attention on her while the other slipped away in ten minute shifts. Parents, like fruit, are best fresh.

– Rules: Finally, we refused to let our toddler touch anything she wouldn’t be permitted to play with the entire flight. That means the tray never came down when she was awake (she would infuriate the person in front of her by shaking his chair with each little step her rabid doggy took). She didn’t get to touch the TV screen on the back of the chair (another seat manhandling hazard). No phones, Kindles, headphones, etc. that Mommy and Daddy might want back later. Leave the window shade alone, thank you very much. These rules go over like a lead balloon at first, but once firmly introduced and reinforced make for much smoother flights.

Pre-kids we traveled to Spain and Rome for two weeks with one small carry-on roller board and a backpack. When we travel to New York, California, and Missouri to visit grandparents we still manage to carry-on most of the time thanks to the elder generation’s generous purchasing of onsite cribs, high chairs, and car seats. Our strategy for international travel: pack heavy. We experienced the wonder of the ultra-light Bjorn brand portable crib thanks to a loan from friends. We easily fit a Chicco Caddy Hook On High Chair into a standard size reusable grocery bag and hung it on the handle bars of our excellent UPPAbaby G-lite umbrella stroller when venturing out for food. Speaking of food, we packed almost 10 pounds of it: a week’s worth of those squeezable puree pouches plus a stockpile of graham crackers and other non-perishables. Sure we had to check two enormous bags and my husband's posture may never recover, but not once did we find ourselves fretting over sleeping and eating preparedness.

– Caffeine: I ordinarily don't drink caffeine. Since it works like a drug, turning me into a hungry squirrel on meth, I treat it like one and use it as sparingly as possible. Our secret for beating jet lag on before kids: coffee upon landing at 7:00 a.m. local time, stay awake into the early evening, and sleep 14 hours the first night. Done. Adjusted. That's difficult to do with kids, but not impossible. It's called chocolate. Shake them awake whenever they start to drift off, ply them with those little foil-covered chocolate coins or something similarly fun to open, and voila.

– Skip a nap: If you need more arsenal against jet lag, skip a nap. Blasphemy, I know. But it works.

Parenthood means sacrifice. In order to enjoy exploring a new city, we found it necessary to make two major adjustments.

– Kid-friendly restaurants: We swallowed our foodie pride and ate at second and third tier establishments fronting on plazas. Kids simply aren’t used to savoring their food and lingering over multi-course meals, let alone at European speed, two or three times a day. To have any hope of feeding the three of us without brandishing a cattle prod at the wait and kitchen staff, we had to choose meals accompanied by entertainment. On plazas a steady stream of capoeira dancers, cross-dressing opera singers, mariachi bands, and older men playing relatively unpopular instruments accompanied by an animal (e.g., accordion and monkey or sitar and cat), performed to her delight.

– Activity restraint: We learned the hard way to reign in our sightseeing ambition. Sitting in her “special chair” for two long meals a day left our daughter with little patience for stroller time. Whereas the ghosts of Mommy and Daddy past would tick three or four tourist attractions off the list each day, we embraced destination modesty after a first day full of frustration. After that, we visited one exciting locale a day and spent the remaining hours playing in parks, wandering through street fairs, and perusing the wares in outdoor markets at a toddler's walking pace.

If I’d gotten a glimpse of this post in 2008 would I have scheduled a trip to Japan or even put off having kids a bit longer? Maybe. But despite the inconveniences, concessions, and expenditures described above, my primary emotion upon returning home was one of wonder. I’m absolutely amazed and exceedingly grateful that world travel and little ones are more like oil and vinegar than oil and water; shake it up a little and you’ve got a healthy, tasty treat for the whole family.

ADDENDUM: Five years after first typing out these tips, I took three children to France and added an arrow to our international travel quiver. We explained to our six-year-old and four-year-old that Mommy and Daddy's favorite thing to do is to walk around a city looking at interesting things. They got on board, and we spent hours exploring Paris together – with them alternating turns in the umbrella stroller, the baby in the front pack, and many a "look, Mommy, isn't that the most int-a-westing dooh knob you eva saw?" Frequent gelato stops help too.

12 Tips for Flying with Kids
Lessons in traveling light.
A Trip Across the World with a Newborn & a Toddler
advertisement

12 Tips for Flying with Kids
Lessons in traveling light.
A Trip Across the World with a Newborn & a Toddler

How to stay safe on Halloween 2020 with doctor-approved ideas