Published by manvsmommy on April 6, 2017

I have written a lot about ADHD, however, I have only merely breathed a mention of a lesser known challenge among kids today, Sensory Processing Disorder (SPD). When many of you think of SPD you either have absolutely no idea what it means, or you’re like, “yes, yes, that’s when your sensors are processing all wrong, right?” Well, in a way, yes, but do you understand what that really means for daily functioning? I’ll break it down for you in a way that is most easily understood.

You have five senses, touch, sound, smell, sight, and taste. Additionally, and less known, our bodies also take in information through body movement, position, balance, and muscle control. During your day, these systems work seamlessly together to take in the environment around you- so seamlessly, in fact, that you likely don’t even register the workings of this finely tuned machine until a wrench is tossed directly in its cogwheel. You have all put something in your mouth, like tapioca pudding, or heard nails run down a chalk board and had a visceral bodily reaction. You shutter a little, maybe gag on that weirdly textured food, and are generally left with an overall edgy feeling for a few seconds. What if you felt that way throughout your day, and you never knew when it was coming or what exactly will cause it?

Sensory overload is very real, and very challenging. It is easy to see a child having a tantrum at a birthday party and think, “There is THAT kid, the one whose parents can’t control him, the one who needs a good spanking, or the one that is just a total wuss.” Now, stop and think of that same child hearing experiencing the sounds of the other children running around the party like a heard of lions roaring in his head. Consider that because his balance is off he has a hard time participating in the designated party activity without falling and this makes his sad and frustrated. Ponder the fact that he doesn’t know where his own body is in space, let alone how far away he is from the kid he is supposed to “tag”. Now, look at him again. Does it seem strange that he is cowering in the corner and crying? 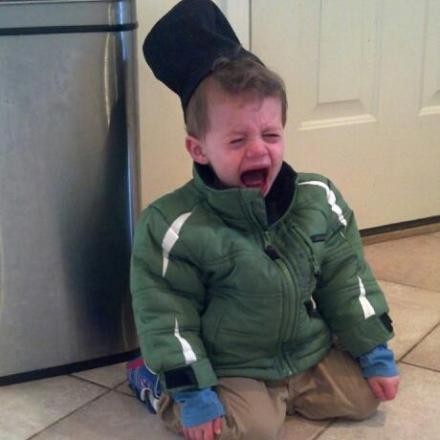 SPD infiltrates every aspect of a child’s day. There is no time in which your body is not using its sensory system. This is just a small picture of how it affects a child.

It’s 4:45AM, your child rolls over in bed and tries to go back to sleep, but a bird chirped outside and it might as well have been as loud as a bell ringing directly in his ear. He glances at the window and notices that it’s just starting to get light out. Time to get up, there is no going back to sleep with cacophony of birds and the bright light peeking through the sides of the blackout shades.

Breakfast time, he’s already tired because, well, he’s been up for three hours. Food choices are severely limited. This is not just a picky eater, this is an eater with sensory issues, a completely different ball game. He struggles to get down the same thing he eats every morning, a cooled toasted waffle, with a THIN layer of butter- because too much butter makes the waffle soggy and that feels “weird” in his mouth, a cheese stick- right out of the refrigerator because if it’s sits around for more than a few minutes it warms up and gets “squishy”, and if we are lucky some apple slices, but make sure that there are no bruises or excess skin hanging off of the slice, that would deem it garbage.

Prep for school comes next. Brushing his teeth only happens with one specific flavor of tooth paste and a very soft bristled brush- it’s important to keep that gag reflex in check (this issue also makes going to the dentist a nightmare). Socks must be perfectly placed on the feet and ankles; it’s impossible to put shoes on if there is even the slightest imperfection!

Bus time! It’s important to sit in the front and it makes him miss sitting with his friends. But let’s face it, the bus is loud, a sensory overload nightmare, and it makes his body out of control. When his body feels this way he lashes out and someone might get hurt, or, say, hit in the head with a seat belt. He’s a young child and only has a mild understanding of what is happening to his body in the moment, he has yet to develop the skills to control himself all of the time.

School… so many different challenges throughout the day. The cubbies are in a small space and sometimes all the kids gather there at once, he feels claustrophobic and sensory overload is imminent. He tries to get out of the area but there are just too many bodies in his way. Overload begins, he is being crushed into a small space with no movement and he starts pushing kids out of the way so he can get free, breathe and calm his body. Being surrounded in such a close space by so much (kids in this case) is overwhelming, he can’t figure out how close he is to the other children and then when he bumps into them it feels like he is hitting a brick wall that is blocking his much-needed freedom.

He tries to sit and complete his work, but the students next to him are tapping their pencils and moving around in their chairs. Don’t they know that that sounds like a symphony of distraction and makes it impossible to focus?

Lunch brings its own trials. Don’t forget that most food is unappealing and has too much flavor to begin with (he has broken out into a cold sweat from certain brands of chicken nuggets that are “too peppery”). Now add yelling, excited kids to the mix and eating, though being hungry, is practically impossible.

The afternoon wears on and the 4:45AM wakeup is taking its toll. Any resistance he has had of keeping it together is fading fast and sensory overload comes quickly, often, and hits hard.

After school, he wants so badly to participate in activities but he is shot. The lack of sleep, adequate nutrition, and heightened bodily awareness work against him. After some quiet time, he may or may not be ready to participate in an activity of his own choosing. Translation: there are things he wants to do, to learn, to engage in, and his body just will not afford him the ability to do so some days.

Night time approaches and it’s time to bathe, we have the same argument over washing his hair that we have had every night for years, his hair follicles hurt. Moms, imagine what your head feels like after you have worn a ponytail for too long and you finally take it out, it’s sensitive, right? I assume that this is what his head feels like all the time. Fully submerging his head under the water to get the shampoo out… a nightmare.

Finally, sleep time. Luckily, he is so exhausted from his early wakeup that there is not much resistance. His body is done and desperate for rest. Some light scratching on the back and a few deep tissue hugs and he is out like a light.

This is just a snippet into a day with SPD. It infiltrates every aspect of a child’s life because one’s sensory system is always engaged. It makes certain sports impossible, some types of parties a nightmare, eating, learning, and simply playing with friends a challenge. Some days it’s not noticeable, and other days it’s a constant struggle from the minute he wakes up until the minute he falls asleep. So, next time you see a child having a fit in the middle of Target, ask yourself, is this child a “bad kid” or just possibly having a sensory meltdown?

Maybe, he won't grow out of it: Accepting my son's sensory needs
The Guilt and Fear of My Son's Failure to Thrive Diagnosis
Dear Kindergarten: My Stressed-Out, Heartbroken Child Survived You.
advertisement

Maybe, he won't grow out of it: Accepting my son's sensory needs
The Guilt and Fear of My Son's Failure to Thrive Diagnosis
Dear Kindergarten: My Stressed-Out, Heartbroken Child Survived You.