If your wife falls asleep on the couch... 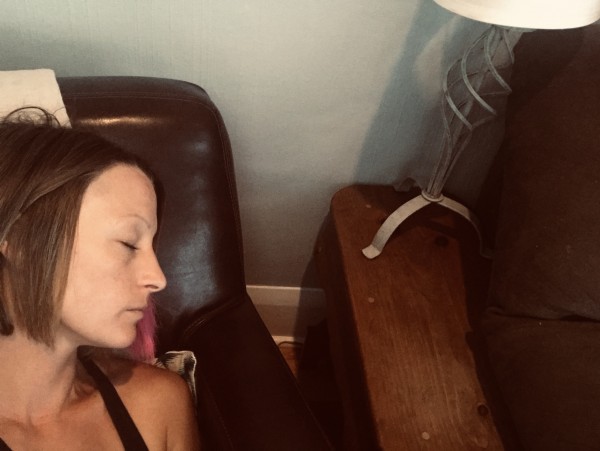 Every single night, without fail, I doze off on the couch.

I try SO HARD to stay awake to have that crucial non-verbal time with my husband where we are both on our smartphones, and Netflix is on, because heck, that's so romantic and terrific relationship maintenance.

However, I. ALWAYS. FALL. ASLEEP.

Sometime between 10 pm and 11 pm, seeing the back of my eyelids is my only (involuntary) priority.

Most nights, my husband will catch me drifting away to dreamland and tell me to "go to bed."

And, like a good little girl, off to bed I will go, and instead of going to sleep, I'll get back on my phone and to checking social media.

Except for last night.

Last night, I came up with this little parody of 'If you give a mouse a cookie..." which I've dubbed

IF YOUR WIFE FALLS ASLEEP ON THE COUCH

"If your wife falls asleep on the couch, it's because she had to pour forty-five hundred sippy cups of milk.

When she gave your children the milk, then they NEEDED a straw.

When they finished, they asked her for a napkin.

Then they accidentally broke the mirror while fighting to look at their milk mustaches.

When they looked in the mirror, before it broke, they thought the youngest's hair needs a trim.

So they discreetly grabbed some scissors.

When they finished giving the two-year-old a trim, the oldest ran to get a broom to sweep it up.

He got carried away and swept the baby's hair into every room of the freakin' house.

He then used shaving cream to wash the floors as well!

When they were all done, they asked if they could take a nap.

Your wife cleaned up the mess and set them each up with a blanket and a pillow.

They crawled in, made themselves comfortable on the couch, and she even fluffed their pillow a few times.

They asked her to read them a story.

So she did, and they asked to see the pictures.

When they looked at the pictures, they got so excited and wanted to make pictures of their own.

Then they wanted to hang their pictures on the refrigerator.

Which meant they needed Scotch tape.

They hung up their drawings and stood back to look at them.

Looking at the refrigerator reminded them that they were thirsty again.

So... they, once again, each asked for yet another glass of milk.

But, the milk had run out, so Mommy had to go to the grocery.

While at the grocery store, your children acted a fool.

Mommy got the milk and eighty-four other items she did not need.

She gave the children each some milk, and when you give a child a cup of milk, they are going to ask for a cookie.

So, thank God for the #publix bakery, each kid got a free cookie.

They went back home, and the kids asked for a straw and a napkin.

They started shooting spitballs at each other.

In the chaos, they spilled the milk.

When you spill milk, you need paper towels to clean it.

But, there were none -- they had run out.

So back to the store they went.

And, chances are, if your wife has to deal with all this fudgin' shiitake in one four-hour span of a single day, she's going to fall asleep on the couch.

Make Dad Happy This Father's Day ... With a Donkey!
When it Comes To Your Partner, Don't Sweat the Small Stuff
Everything Doesn't Have to Be Perfect, All the Time
advertisement

Make Dad Happy This Father's Day ... With a Donkey!
When it Comes To Your Partner, Don't Sweat the Small Stuff
Everything Doesn't Have to Be Perfect, All the Time