If the Boxes Could Talk 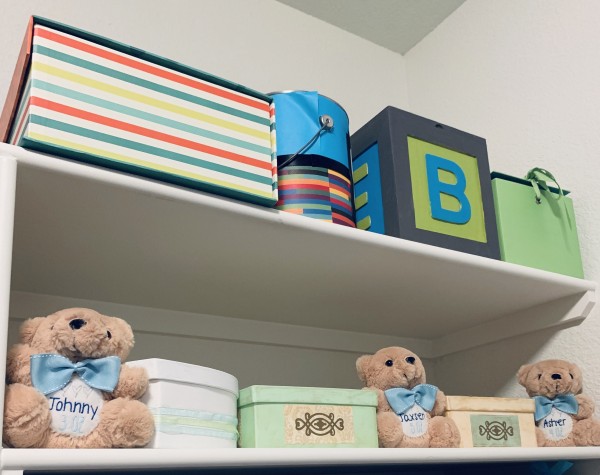 Each of my boys has a special memory box.

Some of them are filled with special baby outfits, hospital bracelets, favorite baby toys, and sweet cards from their baby showers.

One is bigger than the rest because it has a bigger job to do. It holds the special tokens of a birth mother’s love. A few outfits and a stuffed giraffe that a young girl bought for the baby she entrusted to us are tucked inside waiting until it’s time for them to help us tell our son a powerful story of sacrifice, hope, and indescribable love.

Two have outfits that once fit perfectly on tiny, less than half a pound baby boys. They include tiny teddy bears that were snuggled up in the arms of my angel babies when I softly sung my first and last song to them. They also hold the only pictures I will ever have of two of my boys. Arguably my most prized tangible possessions.

And the last box stands has nothing but a little blanket inside. No pictures of my second-born son, no baby clothes, no other sweet reminders of his short life. It’s just a placeholder for the memories that are stored away carefully in my mind.

The day he was born was different. The hospital staff assigned to my care didn’t know what I needed. They didn’t know how to handle his death combined with two babies still nestled in my womb. The nurses were scared of upsetting me further, so they didn’t dress him in a tiny layette like they did his brothers two weeks later. I first held him wrapped in a medical cloth, pulled from a shelf nearby.

The hospital staff hid me away on a floor away from labor and delivery so I wouldn’t hear the cries down the hall. They did the best they could with what they knew and understood about a woman who had just lost one of her children.

No one told me to take a picture of him. Oh, how I wish they would have. It’s like a sucker punch when I close my eyes, eight years later, and the image of his face isn’t as clear as it once was. I struggle to remember the weight of him in my hands as I held him close to my chest while begging God to give him another chance.

Eventually, they would bring a sweet little blanket to wrap him in, which gave me more comfort than they could have imagined. It is the only item I have to run my fingers over as I reminisce about that day.

Merely two weeks later I was once again saying goodbye. This time to two babies who fought so hard, but were no match for the cards we had been dealt. This time was different. The nurse taking care of me somehow knew what I would need for years to come. She gently bathed our babies, dressed them in tiny clothes donated by an amazing organization that focuses on pregnancy and infant loss, and brought us beautiful memory boxes for all three of our triplets. She apologized that she was not there to do the same two weeks before. The acts of kindness she gifted to us that day will never be forgotten. One woman changed the way that day will be remembered forever.

I will be the first to say that I didn’t even know what I needed when our first baby died. It’s only now that I look back and regret how his special day played out. There is no way I could have anticipated his death, or prepared myself for that loss. There isn’t a protocol for how to handle that devastating blow.

Society doesn’t embrace pregnancy and infant loss because it’s too painful to talk about or even think about too much. No one really knows how to react when it happens. Not the people going through it, not the friends, not the family, not even the medical staff. There just isn’t one right or wrong way to walk through a loss like that.

What is important is that you show up for the people who are saying goodbye to their child. Be the nurse that goes the extra mile to show genuine compassion. Be the friend that shows up to sit in silence by the bed and hold her hand. Be the co-worker who stocks up their pantry at home with food because grocery shopping is the last thing on their minds. Call across the country to set up a meal train for your friends as they leave the hospital broken and empty handed. Ask them if they want to talk about their sweet baby. Let them know you aren’t scared of the pain they are feeling.

You just might be the person who they remember years later as they think of the kindness that was woven into the most difficult time in their lives.