I’ll admit it: I’ve never camped. I’ve never struggled to pitch a tent and blow up an air mattress as a storm rolled in from the north; or the south. (Where exactly do storms roll in from anyway? See? This is why I don’t camp!)

I’ve never started a fire with sticks and coconut shells a la Tom Hanks in “Castaway,” never killed my dinner and roasted it over that elusive fire, never fallen asleep to the sounds of coyotes howling in the distance, and never awoke to the smell of coffee brewed by, uh, well, how does one make coffee in the woods anyway? I’d ask my wife but she’s busy cleaning our espresso machine.

Over the years, I’ve occasionally tossed out the idea of abandoning our annual family journeys to theme parks, waterslide havens and Caribbean hideaways in favor of the great outdoors. Usually this has been met with eye rolls and sarcastic comments along the lines of, “Hey, Dad, Disney World is outdoors. And it’s great!”

My children, hilarious they are!

I’d probably be miserable anyway, and not because my poor tent-erecting skills would be on full display. No, I’d quickly realize that those coyote howls that I so longed for would be drowned out by the sounds of YouTube videos coming from my girls’ cellphones. Or a battery-operated hair dryer they insisted on packing just in case any cute male campers are in the vicinity.

But this summer they’ll have no excuses, for I was recently introduced to a new leisure activity that should satisfy everyone: Glamping. 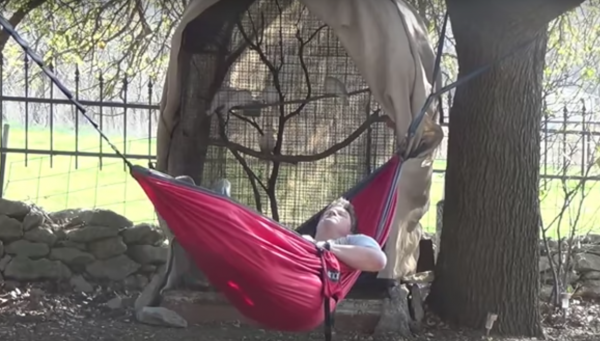 A portmanteau for “glamour camping,” glamping has, apparently become quite popular with “cwimps,” my just created portmanteau for “camping wimps.” A glamping web search netted me information on resorts in Kenya that featured hot tubs overlooking African plains, Costa Rican treehouses containing fluffy bathrobes, and a California campground with an onsite spa and a nearby gourmet market. Instead of deciding whether those red berries on a tree are poisonous or edible, spend your time picking which red wine will go best with your glampfire dinner. Served by a glamping steward.

I’ve already “glamped” once, although I wasn’t aware of it until Jackie, an Airbnb host in Denton, Texas, informed me that I was doing just that while renting her Airstream trailer, parked in the rear of her 100-acre farm.

“You have organic coffee, a tea maker, some tea, a toaster oven, microwave, Wi-Fi, Netflix, (and) Dish,” she said, while conducting a tour of my accommodations. “So really I don’t want to have to hear how hard you’re camping.”

While I didn’t watch Netflix, I was grateful for the ability to check email. And I even heard coyotes that evening! Had they approached the Airstream, I could have tossed them a ham and cheese croissant, one of several I had purchased in the Dallas airport prior to my arrival in Denton. Hey, if glampers need a deli, glampers will find a deli.

It appears there are no hardships when glamping. Did your phone or tablet die while you were under constellations in a moonlit sky? Surely there’s a glampground somewhere that’s just a short canoe ride away from an Apple store.

Forgot to pack the gourmet mustard in your glamping backpack? Some of the glamping sites I found on Google offer room service. No need to seek out another glamper and ask to borrow some rations. Anyway, my guess is that seasoned glampers are too selfish to part with their wares.

“So where should we glamp?” I asked my family one night. “Do we want to experience mountains? Forests? The ocean? You guys pick, and I’ll make the arrangements.”

“How about an all-inclusive resort in Jamaica?” my wife said.

“That’s not glamping,” I said. “Let’s rough it at least a little bit.”

“You can sleep on the beach.”

“Just text me. Isn’t that what glampers do?”

She has a point.