I may be the present one, but it's my husband's presence that's shaping our kids 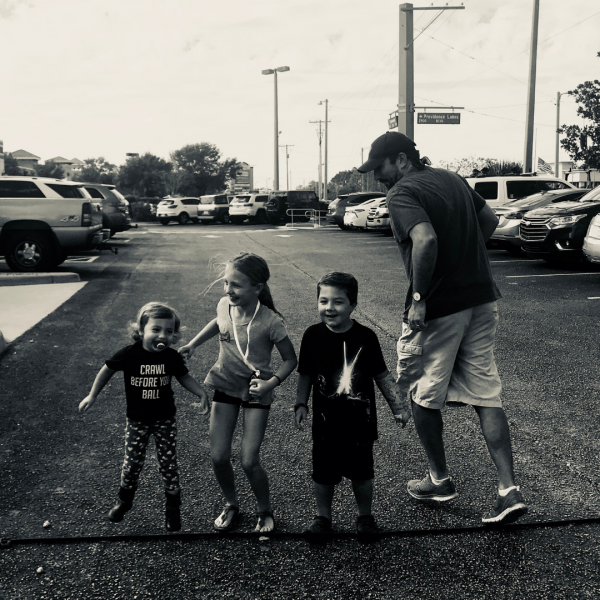 I may be the present one, but it's my husband's presence that's shaping our kids.

It kind of sucks to admit, but honestly, it's quite liberating to recognize and state your faults, and in doing so, at least for me, it gives me a jumping-off point for improvement.

And, see, I didn't call it a "starting point" for a particular reason; I've basically been trying to improve at being a mother since the day I became one, and I am not going to discredit my work -- even with lack of impressive results -- over the past seven years.

But other times, I suck.

I yell too much (who doesn't).

I am impatient (who isn't).

Maybe it's a personality thing or perhaps its a more general "mom thing," but when I am with my kids, I am rarely fully WITH THEM.

When we are home together, I am thinking and looking at everything else I should be taking care of around the house.

When we are out together, aside from keeping the kids safe and alive, I'm usually on my phone either trying to get some work done or keeping up my "vivid cool" filtered appearance on social media.

Not all of the time, but too often.

Do you know who doesn't stink? The kid's father; my hubs.

And, while the reason he doesn't sink is probably that he, unlike me, has time to take a leisurely shower -- BY HIMSELF -- every morning, the truth is that he is awesome for many other reasons.

Maybe it's just my spouse, or perhaps it's a semi-universal trait amongst dads, but he has this uncanny ability to be fully engaged with our children when he is with them and pays little or no attention to the chores, work or social-keeping-up-with that undoubtedly overwhelms the crap out of me.

Seriously, I wonder often, just how does he do it?

Were men born with an innate ability to ignore responsibility?

Or, is it quite the opposite? Is it that they are naturally inclined, to almost effortlessly and without guilt, differentiate between critical responsibilities and those that are undeserving of their attention and effort?

If one of the best bucket-fully-filled feelings in the world is to know that your presence matters so much to someone else that they will give you theirs entirely, what message am I sending to my children when I half pay attention to them each day? Surely not the same one that my kids are receiving from their doting and without fail attentive father.

He may only have three hours a day with them, whereas I have every hour minus the ones they are in school, but this awe-inspiring, anything-but-average ordinary man gives more of himself to the three energy-zapping love nuggets we call our own, and he does it, not for recognition, and without expecting or seeking accolades.

As a busy mother and wife, I throw up my always full hands and play the martyr card day after day, but the real martyr here is the one not looking for sympathy or empathy or anything other than valuable time with his three blessings.

As I said, I may be the present one, but it's my husband's presence that's shaping our kids, and the shape I see is the symbol of unconditional love created by a man with little time and a gigantic heart.

MEN are the real victims of mom brain.
5 Reasons I'd Rather Share A Bed With My Toddler Than My Husband
My Husband's Most Important Job: Teaching Our Sons How to Treat Women
advertisement

MEN are the real victims of mom brain.
5 Reasons I'd Rather Share A Bed With My Toddler Than My Husband
My Husband's Most Important Job: Teaching Our Sons How to Treat Women