I Have the Perfect Body

It may not have been your first thought when you looked at this picture of me, 39 weeks and 2 days pregnant, playing with my children in our backyard. But it's true.

It was a hot Saturday. The boys were splashing around in the pool, and on a whim, it occurred to me that I'd like to see how big I'd gotten. At 39 weeks and 2 days, it was the longest I'd ever been pregnant. I handed my husband my iPhone, shot him a grin and said, "It might be the last one." He snapped the picture, and I texted it to my mom, mother-in-law and sisters with this caption: "This is what 200 pounds of awesomeness looks like, people."

I never planned to share it with all of you.

But as I began studying the extra 50 pounds that's packed onto my 5-foot 9-inch frame, instead of seeing layers of flab and cellulite, I actually saw something quite awesome.

I saw a woman who is confident, happy and healthy. And days away from giving birth. 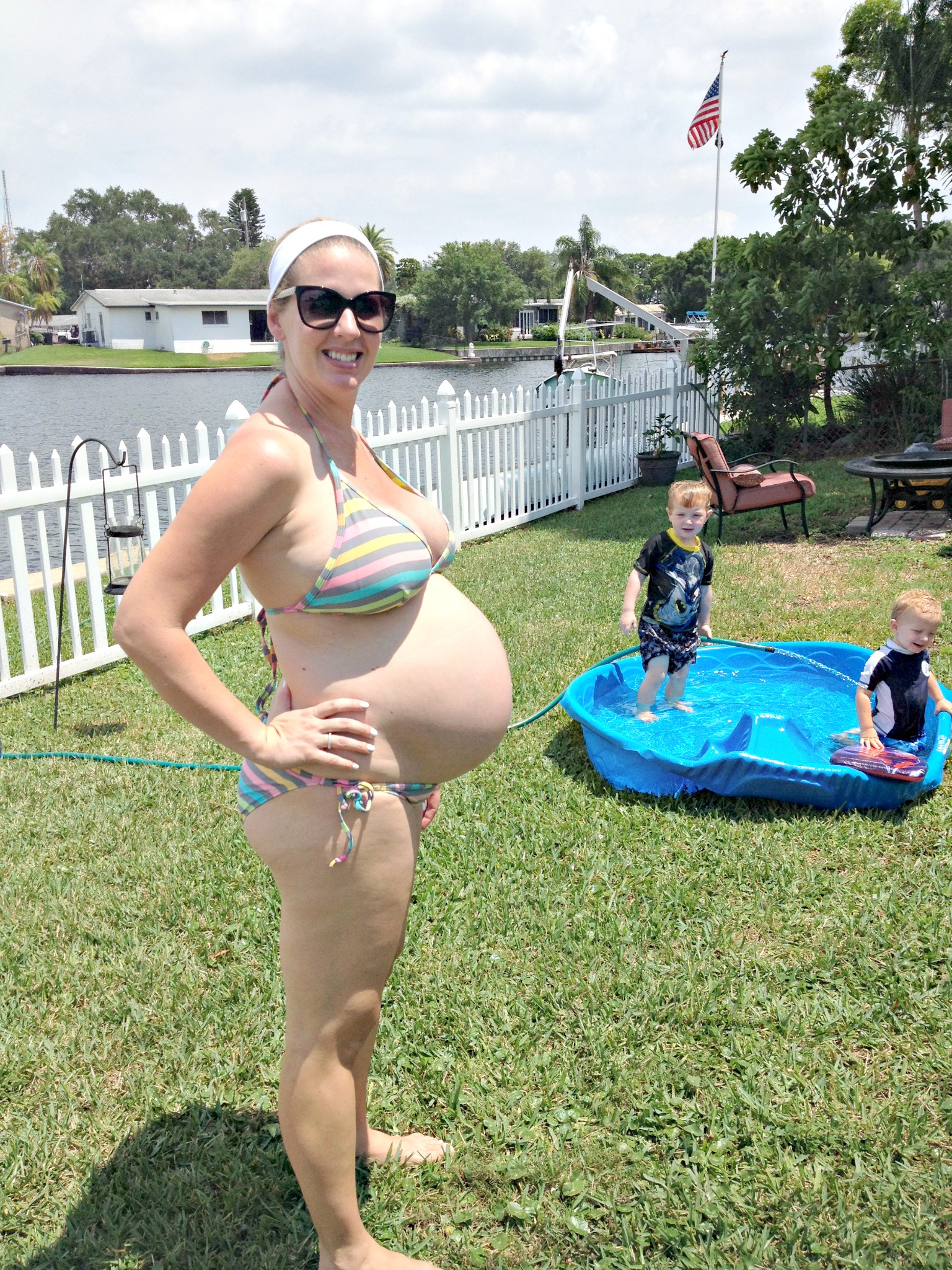 Yes, it's true. My thighs are speckled with cellulite. In fact, if you really want to know, my legs are thicker than they've ever been. When I walk, I can feel the fat under my butt, thrusting forcefully from side-to-side. When I sit, my pants pinch my love handles and crotch. And if I wear a dress or skirt, I get red, burning sores from the fat rubbing together on my inner thighs.

But the truth is, my legs are strong. Since I first became a mom, 3 years ago, these legs have walked about 5.4 million steps. To the park, the doctor's office, through the grocery store parking lot, and to church. And, it's not out of the question to say that, for at least 1.8 million of those steps, I was also wearing a baby, carrying a toddler, or pushing an extra 30 to 60 pounds, in a single or double stroller.

And, I happen to think that's pretty cool.

You'll probably notice how my stomach bulges away from my body, and my belly looks like a big white balloon that's ready to pop. It's laced with veins, and anchored by a waistband that overflows with pudge. I realize it may not be the basketball-belly-on-a-thin-frame you're used to seeing in social media ads, on television, or on the cover of Fit Pregnancy.

But, this belly has actually done some things that I consider to be quite amazing. Between my 3 pregnancies, more than 20 pounds of flesh has been knitted together -- intentionally, miraculously and perfectly -- inside my womb. It's a place where my organs have been pushed and elbowed, and a head has edged uncomfortably onto my pelvic bone for at least the last 3 months. It's a place, where for a combined 27 months, a fetus has lived, grown and thrived, until he was ready to enter this world.

Which is pretty freaking awesome.

If you saw me from behind, you'd notice the love handles at my waistline. And if I wear the wrong bra, it cuts fat rolls into my back and underarms. The rolls are so thick, I can grab them between my thumb and pointer finger.

But the truth is, I wouldn't trade this back for the world. It's proven its worth by hoisting around the 35, 42 and 50 extra pounds I've put on during each pregnancy. And, last week, when my preschooler had a bad day, it allowed me to comfort him, by taking his sweet, 37-pound frame into my arms and carrying him for a few minutes. Combined with the extra weight I'm already carrying, that's an extra 87 pounds that my back supported, out of nowhere.

Which is pretty darn amazing.

I should probably talk about my arms, too. In pictures, if I don't put my hand on my hip, they're about twice as thick as they usually are. If I let them rest against my body, the extra fat on them spreads out so wide I almost don't recognize them. When I wave, I've gotten used to feeling them sway, heavily, underneath.

But my arms are also amazing. Because they have the energy reserves to do just what they need to. By my estimates, they've rocked a newborn to sleep about 1,200 times. And held a little one, weighing anywhere from 10 to 25 pounds, for somewhere in the neighborhood of 1,080 combined hours. They've also hoisted a baby, toddler or preschooler into a car seat 2,920 times. (And, in the next year, they'll do a lot more of all 3.) My arms are strong and capable.

Which happens to be exactly what I need.

And, well... you can't tell in this picture, but my breasts are swollen and veiny. When I walk around at home, they flop from side to side, atop my large belly, like a huge pair of deflated water balloons. The truth is, if you only look at Victoria's Secret, you probably haven't seen anything like them before.

But, over the last 3 years, they've been doing an incredibly important job. They've supplied about 4,560 meals to 2 growing, thriving, healthy babies. And, in the next year, they'll produce about 2,280 more meals for my third child, 720 of those in the next 3 months. They're not as perky as they once were, but their downward slope helps my babies secure a perfect latch. So, you see, my boobs may not look like they belong in a magazine, but they're actually performing a job that's way more important.

And that's pretty darn incredible, if you ask me.

Behind my sunglasses, what you don't see are the laugh lines and under-eye circles on my puffy face. The under-eye circles are because... well, the way I figure it, I've been woken up at least once in the middle of the night for about two-thirds of the last 3 years. By a newborn needing breast milk, a baby wanting to be held, a toddler about to vomit, or a preschooler, needing to go potty, have his water cup refilled or help finding his cuddle. All told, that's about 2,600 times that my sleep has been interrupted.

And, what's really amazing is... all those times, there was only one person in this world who could make that little child feel better.

Who could offer him the warm milk that had been made just for him. Who could wrap soft arms around his quivering body and offer the exact touch he needed to relax enough to return to sleep. The only person, who he wanted to bear-hug him as he screamed over the toilet, terrified by the sickness coming out of his mouth. Who could nurture him, and tell him words in his own little language.

The most perfect words that would make him feel better so that he could rest.

To my children, this body is a place.

The most perfect, comforting, safe place in their little world.

And so, you see, I really do have the perfect body.

The baby weight will come off. The great bikini picture can come next summer.

But right now, this thick, swollen body is the perfect vessel that carries the most important person in my children's world.

A body that's outfitted with exactly what they need:

Strength when they're weak.

Food when they're hungry.

Comfort when they're scared.

And, that will always nurture them with an unending, never-interrupted supply of love that knows no bounds.

And, if you ask me... there's nothing more perfect than that.