How My Son Took His Bully Into His Own Hands 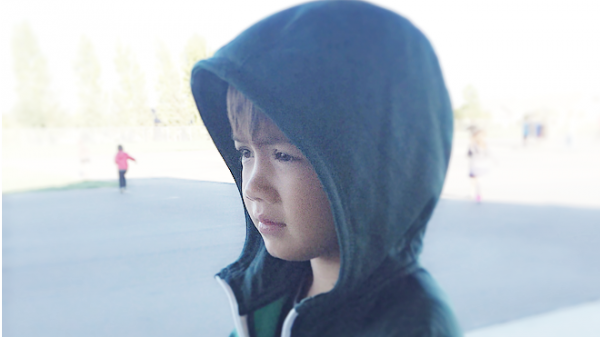 "Mrs. C.? This is your son's principal, Ms. A. Don't worry, your son is fine, but I wanted to fill you in on an incident that happened yesterday that your son was on the receiving end of."

My heart dropped. It sank so deep into my stomach I had to pick it up before I could utter a single word.

I found out my son had been bullied.

A "victim" as she called him.

My lovable, intelligent, sweet soul of a boy.

As he stood in line with his class, a boy in his class who my son actually mentors due to some difficulties he has, kicked him on his backside three times. My son turned around and told him to "stop it!" But instead, received three swift kicks to his privates.

As my blood boiled and I took a deep breath, I wracked my brain on how I could have missed this. Why didn't he come to me the day before when it happened. What the hell was I thinking or doing to miss this?

The principal went on to tell me that once the other boy kicked him, my son told him one last time to "stop it" before he took off to his teacher and sobbed while he told her what just transpired.

All in all, it was handled wonderfully by the administration. His teacher sent an email immediately to the principal, the other boy received a stern talking-to, and my son was consoled and comforted by his teacher.

The principal didn't get the email until the next morning, the day I was receiving the call. She called my son into her office and shared their conversation with me along with her personal thoughts and feelings.

"Mrs. C., I have to tell you woman to woman; from one mother of two sons to another mother of two sons, your boy is incredibly special. We've had many incidences of bullying, and I've had to break up a lot of fights due to them, but your son is the exception. He took matters into his own hands and used his words, not his fists. He sat in my office this afternoon as we recounted the event and I've never seen a boy so confident in his decision to react the way he did. Do you know why Mrs. C.? Because it was the right decision.

He's very mature for his age, but I was taken by his confidence and self-esteem. You should be very proud of him. He shared with me that he hadn't told you or your husband yet and gave me full permission to discuss it with you. He's special, and you're really doing something very right."

I was speechless. Sure, I word-vomit my therapeutic nonsense on him day-in and day-out, but that's not what got me. It was the way he reacted in that moment of pain, embarrassment and fear.

That's who I know my child is.

Hearing about how wonderfully he handled it numbed my pain for a split second, but the pain returned as I replayed the story over and over in my head. The thought of my goodhearted child being picked on, or hurt by anyone on this earth crushes me into millions of pieces without a way to soothe myself.

Once I picked him up from school, his face so bright when his eyes met mine. The smell of his skin, waxy like crayola and sweet like home, I wanted to fall into his arms. I wanted to cry into the nape of his neck apologizing for the pain he felt the day before. I wanted to break while he stood so strong.

I held his hand and mentioned that I heard about what happened. As easy as the breeze, he gazed up at me as his almond eyes met the sun and said, "Yea, I thought so mom. Everything's ok."

Where is this strength coming from? I pleaded with myself. How do I keep it together?

I sat him down at home and asked if he wanted to tell me about it. And he did, more so to humor me than anything. I saw the confidence his principal spoke of. And when he was done, I asked him, "What made you decide to react the way you did?" His reply, "Because that's what you taught me to do, mom. And it was the right thing to do."

He mentioned the boy by name and told me he feels sorry for him because he has such a hard time in class. He compassionately stated, "I feel bad that he'll never get to experience the fun days at school that we have, because he's always losing his recesses for his bad behavior. But don't worry mom, he won't do anything like that to me again. We talked and he knows that it's not ok."

I got on my knees, face to face. Smothered him with kisses, hugs, and praise. And he looked me dead in the eyes and said, "I have to help him the way you help the kids at your work as a therapist. And I was going to tell you mom, but I was tired of talking about it yesterday, so I needed a break."

I squeezed him and didn't want to let go.

Before bed, he came into my room, requested to spend time with me, and I dropped every single thing under the stars to sit with him and talk. And laugh. And tell stories. We held hands as he ran his fingers over the wrinkles on my palms.

He fell asleep clutched on to me so tight, as if I held the key to his every hope and dream, and I clutched him the same, because he does.

I love him more than this universe could provide me words to express and am proud of him with every fiber of my being. I love watching him become this person of wisdom, good judgment and a heart of gold.

Parenting is such a hard job, but he's worth it. They're ALL worth it.

A million, trillion times over, worth it.