Published by Jennifer Swartvagher on February 8, 2016

I was in fifth grade the first time I ate a Pop Tart. Sugary cereals and treats were not the norm at my house. My grandmother would have rather bake a pie or batch of sugar cookies before she brought any frosted sugar coated breakfast food home from the grocery store.

My best friend, Fran, introduced me to some of the finer things in a preteen’s life — Nutella, Cool Ranch Doritos, and Pop Tarts. I used to be amazed with her pantry filled with warehouse sized packages. The box of Pop Tarts was immense. One rainy afternoon, I tried every variety twice. I might still be feeling the effects of that sugar rush.

I did not have them very often, but cherry was my definite favorite. I knew my future husband was a keeper when he showed up outside my classroom early one morning with a box of those pink frosted pastries.

Now that I have kids of my own, I don’t like to send my kids off to school high on sugar. Don’t get me wrong, we do buy Pop Tarts, but they are usually a once in awhile treat.

After a trip to the grocery store filled with whining and begging for sugary treats, I came to the conclusion that Pop Tarts were just little pies. I set out to recreate my own version. I kept my recipe simple and did not attempt a sugary glaze for the top. When they came out of the oven, the pastries were sweet and flaky.

I cannot wait to try this recipe out with different fillings. The best part, I can freeze these and pop them in the toaster for a quick breakfast when we are running out the door. 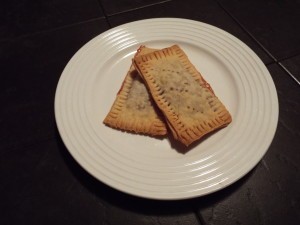