***Disclosure: I was given a complimentary 2-day media pass for Fan Fest 2018. All opinions are my own***

Last month I had the opportunity to attend my very first Fan Fest Event. I was thrilled to learn both Walker Stalker Con, and Heroes & Villains would take place under one roof. I honestly didn’t know what to expect when I walked through those doors. Being a huge fan of Arrow and The Walking Dead, I knew it couldn’t be anything short of amazing!

What is Walker Stalker Con and Heroes & Villains Fan Fest?

Walker Stalker Con is by fans, for fans. Their focus is on authentic interactions with actors, free family-friendly activities throughout the convention floors, and a relaxed environment where the actors we love can be themselves.

Heroes & Villains is an event that brings the stars of today’s comic-inspired television shows & movies to you.

These events are held year around in cities throughout the United States. HVFF even does international conventions. Two are set to take place in Germany and London this year.

Attending two fantastic events for the price of one event is by far, the best deals I’ve seen among this year’s comic-inspired conventions. Last year, I started following Heroes & Villains and Walker Stalker Con on Twitter; which was a good thing that I did. I discovered a deal that saved me even more money off of my boy’s wristbands.

In the days leading up to my visit to the Donald E. Stephens Convention Center, I download the Fan Fest app onto my cell. I wanted to familiarize myself with the features so that once I arrived, I would be able to find things more efficiently.

What I loved most about this app is that I had the option to receive notifications for the panels I wanted to see while wandering around the convention. I thought the app was very user-friendly. So did my teens.

Before traveling out to Chicago on Saturday, I followed Twitter all morning to learn more about the parking situation for the event. The updated information on social media was more than helpful. I was able to find the bus station that allowed people to leave their vehicles in their parking lot all day. They even had shuttles running every 10–15 minutes to pick up anyone heading out to HVFF.

The best part about taking the shuttle was how it drove us directly to the main entrance; which happened to be the area I needed to pick up my boy’s wristbands and my media pass.

As we stepped into a world of Heroes, Villians and the Dead; The Walking Dead to be precise, I couldn’t believe how many of the attendees were dressed up as their favorite comic book, TV show, and movie characters. The attention to detail put forth on their costumes and makeup was unbelievable! My favorite were the families that portrayed the Star War characters. What can I say? I’m about the Force.

The top 2 characters I saw walking around the showroom floors was Negan and Carl from the Walking Dead. The females rocked the Negan look like a boss. There was no shortage of zombies. There were a few that could have easily walked onto the set and played an extra. Maybe this is the perfect place for the producers of the show to find their next on-screen talent.

One of my teens took advantage of viewing the list of autograph and photo opps in the weeks leading up HVFF. A few celebrities sold-out in advance, but the majority of the guest you just had to wait in line to purchase one or both of those options.

With the help from the map on HVFF app I downloaded, my boys and I navigated through the sea of people to finally end up at Michael Rooker’s table. Once in line, two volunteers directed the traffic of people around us to ensure our wait time ran smoothly. 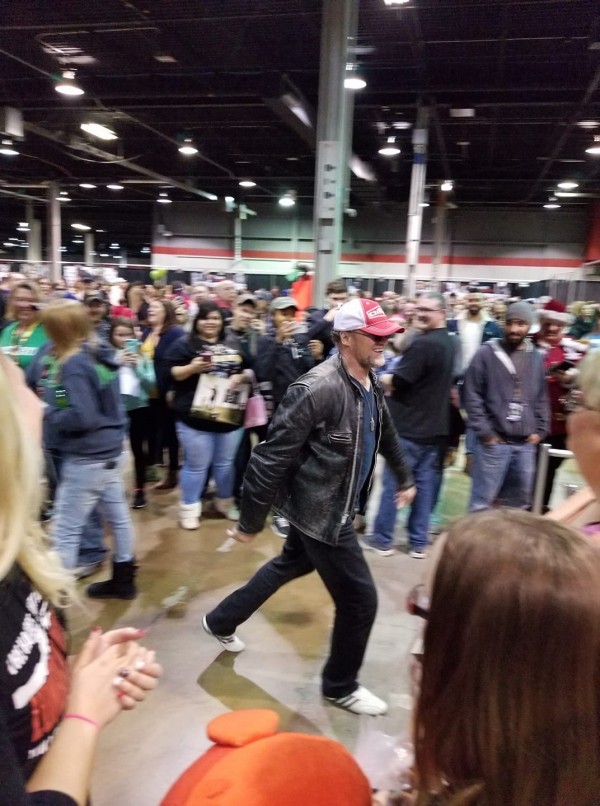 Michael Rooker heading to his table to sign autographs and take pictures with his fans.

My son brought his Guardian of the Galaxy Yondu Funko Pop from home for Michael to sign, but if you didn’t have an item to bring in, there were several 8x10 prints of the celebrity to select. Having the picture signed was included in the cost of the celebrities autograph.

As soon as we left Michael Rooker’s line, my kiddos and I headed straight towards Fan Fest Live Stage where we caught the last half of The Punisher Panel. Unfortunately, Jon Bernthal (Frank Castle) had to cancel earlier in the week, but we still had the chance to see Ebon Moss-Bachrach (Microchip) and Jason R. Moore (Curtis Hoyle). 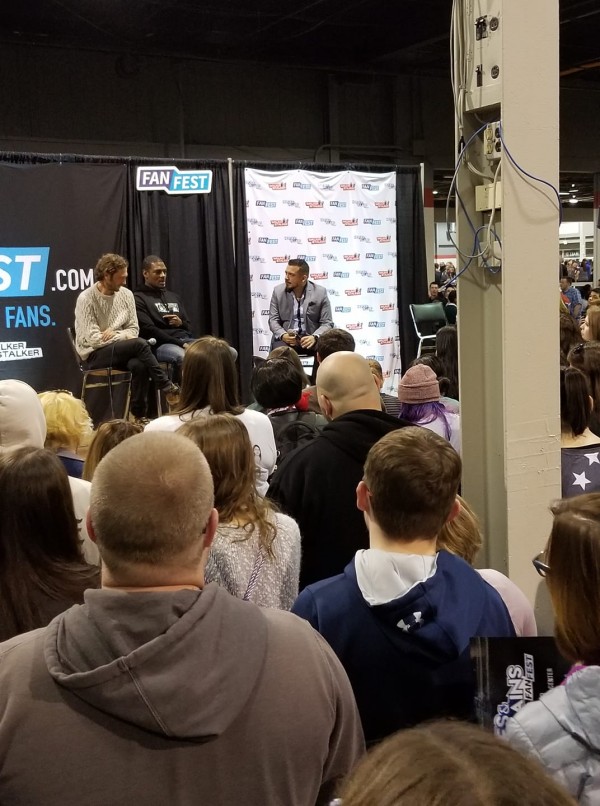 After these two actors exited the stage, it wasn’t too much of a wait to see the next panel which was Team Arrow. 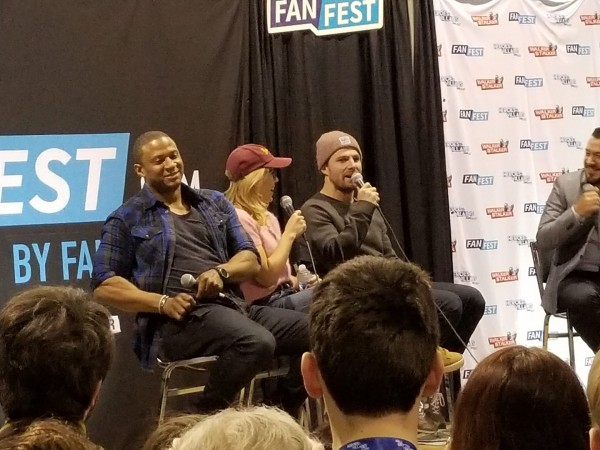 I’ve been a huge fan of Arrow since season one. YES! I was one of “those people” who screamed out in excitement the moment Stephen Amell, the man behind Heroes & Villains, walked onto the stage. Having Emily Rickards (Felicity Smoak) and David Ramsey (John Diggle) on stage with Stephen was a bonus! The silly banter between these three kept the crowd entertained throughout their panel discussion.

On a side note: I want to give a huge shout out to the setup crew for this event. They did a great job of making the stage at the ideal height for the shorter attendees to view from a distance. That’s something this 5'2 geek mom appreciated.

With so much happening around us, I sort of lost track of the fact my kids, and I hadn’t eaten anything since earlier that morning. It wasn’t until my youngest was in dire need of something to drink that we found ourselves at the nearest food vendor where we had the choice of hot dogs, burgers, pizza, and soft pretzels. There were also a few beverage carts that sold a limited selection of snack items throughout the convention hall.

My youngest is a picky eater. Even he enjoyed the food selection offered during this convention.

Once we finished with our food, the next thing on our agenda was to check out all of the merchandise. I utilized the map I received from the media pass check-in while my boys relied on their cell app to locate the vendors that carried specific items they were most interested in.

My 14-year-old collects Funko Pops and Dorbz and pleased with the selection of inventory each vendor had available. My 13-year-old loves Legos. He was on the look for new or rare ones to add to his extensive collection. Their allowance got put to good use that day. My teens walked out with cool merch and a huge smile across their faces.

While my boys were in the middle of their shopping spree, I made sure to check out the Family Fun Zone. To my amazement, there was more than plenty of age-appropriate activities for the kids to partake in. The inflatable bungee trampoline and Velcro wall appeared to be big hits with the younger crowd. 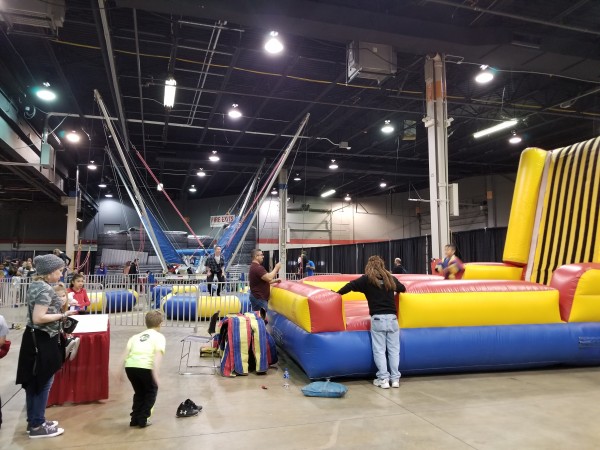 Had I known how family oriented Fan Fest was, I would have brought my kids to these events years ago.

For the participants dealing with medical issues that require resting for short periods of time or anyone just needed time away from the busy crowds, a Quiet Room was explicitly reserved for these individuals. I had the chance to walk into the area and observe several people relaxing in chairs; which appeared to be enough to accommodate close to 100 people. Several tables were also included in the space along with a volunteer to assist them if they needed help with something.

By the time 4 pm rolled around, my teenagers and I decided to call it a day. 6 hours of wandering back and forth between both conventions proved to be all this mom could handle. I now understood why this was a 2-day weekend event. There’s so much going on that one day just isn’t enough to fit everything in.

Due to a prior commitment, my boys and I were unable to attend Sunday’s HVFF festivities. It would have been another eventful day too! We missed out on seeing The Gotham panel along with Luke Cage’s Mike Colter and Dare Devils’ Elodie Yung who plays Elektra.

I’d have to the say the biggest highlight of my time at HVFF came after I discovered that Buffy the Vampire Slayer’s Xander Harris, actor Nicholas Brendon, was sitting at the table right next to where my son was buying Legos. I politely walked up to Nicholas, and immediately struck up a conversation with him. I mentioned how I introduced my sons to the world of BTVS and Mr. Brendon not only thanked us for being huge fans of the supernatural drama, he complimented my parenting skills saying I was an awesome mom sharing my love of Buffy with my kids.

Overall, my experience went above and beyond any expectations I had for Walker Stalker Con and Heroes & Villains Fan Fest. My boys already have me pumped for next year’s Fan Fest. The fact that I was able to spend the whole day bonding with them while creating lasting memories made the 3-hour drive from Green Bay to Chicago, all worthwhile.

To find 2018 locations for Walker Stalker and Heroes & Villains and learn more about these events, check out their official website: 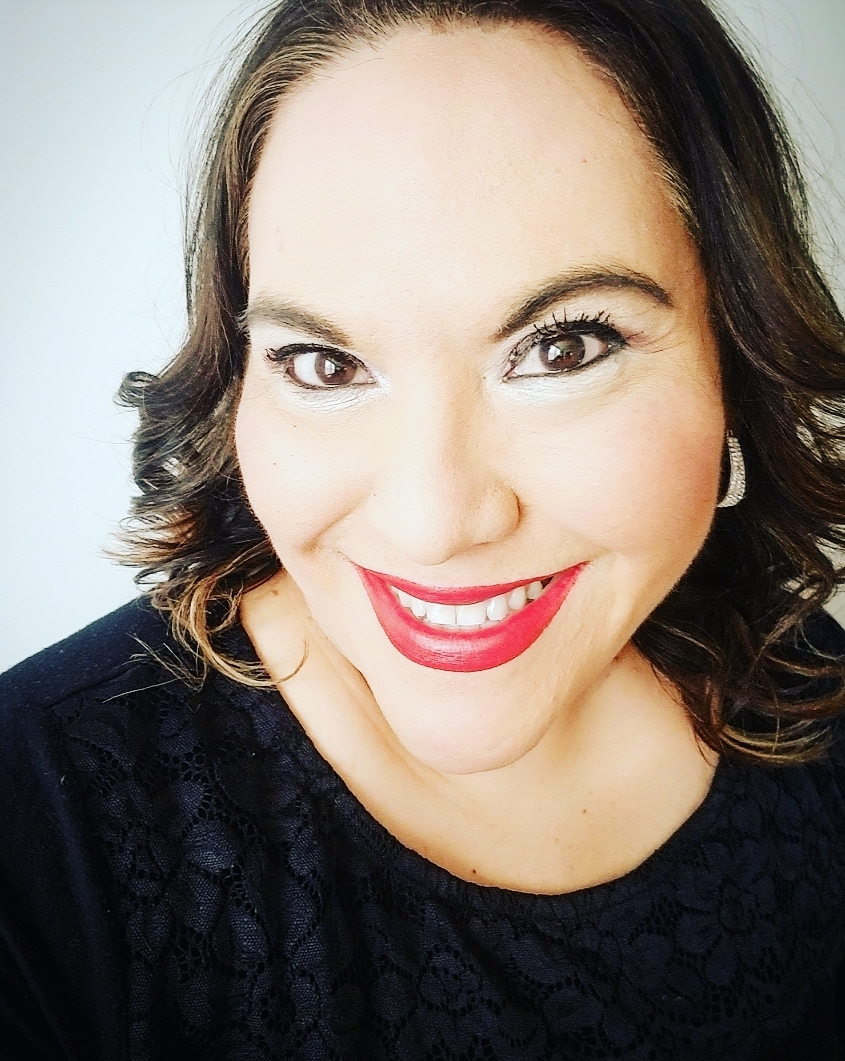