Her child stole from mine so I did this 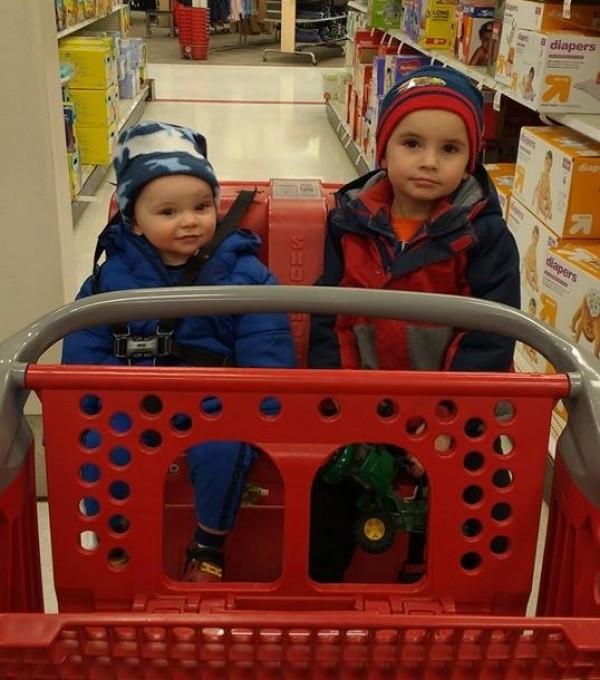 There we were - my two sons (1 and 5) in the middle of the store checkout line. They’d both done so well during our necessary grocery run. I’d acquired one of the big carts, you know the kind with the extra bench seat in the front so you can seat up to 3 kids in the front and 1 in the back (if you are a rebel). They love that gigantic cart, though it’s a pain to maneuver around those displays they insist on setting up in the center of the aisles.

It was great until my older/numbers obsessed son got upset because we left aisle 7 (his favorite number) and moved over to aisle 10 (because 7 was stagnant). His brother of course saw this and figured this was as good of a time as any to protest being strapped into the cart. It was close to lunch time too so a meltdown was on the horizon.

It was as I negotiated with Mr. L about the reason mommy changed lanes and gave Mr. C his non spill (yet always spills) cup with goldfish crackers that I saw her - a young, raven haired, at best guess 8 years old little lady with 50 shades of pink on. As her mom had her back turned putting items on the conveyor belt ahead of us in line, she snuck ever so quickly and grabbed my son’s car that had fallen onto the deck of our gigantic shopping cart. I watched her as she scooped it up and then speedily returned to her mother’s side. It happened so fast that I almost thought I was imagining it in the chaos of keeping my kids calm in the middle of the checkout. Even my son didn’t notice her because he was too busy complaining which really surprised me because his cars are always glued to his side.

I’m not going to lie, my first instinct was to walk up to her and take it out of her hands! Not because I’m a big meany, but because it wasn’t hers to take. And let’s face it I’m a wicked mama bear, and that was my son’s toy after all. But then, as her mother turned around I got her attention and said, “I’m sorry to bother you but your daughter just took my son’s car off of our cart.” The mom’s eyes immediately went to her daughter whose face was now turning beat red. The mom’s eyes shifted to the toy car in her hand, and since all moms basically know every toy that enters their home, she knew that the car didn’t belong to her child. She retrieved the car from her hands and held it out to me. She apologized several times before turning to her daughter and asking her why in the world she would do that. I didn’t say anything else besides thanking her for returning the car. I watched as a sad look washed over the girl's face. The mom finished checking out as the cashier handed her a bottle of sugary juice that I’m sure was intended for the girl. As she paid and walked away I heard the girl ask for her drink to which her mom told her no.

Now this could have been something that happened to that mom before. Who knows maybe her daughter likes to take things that aren’t hers? I also could have let it go. I could have let her keep the car, though my son would probably have looked for it later even though he had another of the same car at home. I could have followed my first instinct and have walked up and made a scene to that girl and her mama. Yet, I didn’t. Do you know why? Because that mom didn’t need that! She didn’t need some strange woman preaching to her about how awful it is for her daughter to steal from another child. She didn’t need me holding up the line at a very busy local grocery store and embarrassing her even more in front of all of those around us. It wasn’t my job to teach that girl a lesson on ethics in that moment after all.

It was her mom’s.

Sure, I got her in trouble with her mom. Sure, she probably lost some TV time and that sugary drink on the way home this afternoon but it wasn’t my place to decide what punishment fit the crime. All I cared about was the fact that my son got his car back.

In a world where people are quick to judge, quick to defend without necessity, and quick to throw another human under the bus – I decided to give this mama some grace. I chose not to make a scene that the little girl would probably remember for the rest of her life. She’ll remember that she got caught. She’ll remember that she didn’t get to keep that toy she thought she wanted. But, she’ll also remember the way her mom handled it. Because in my opinion, there was nobody better to do so.