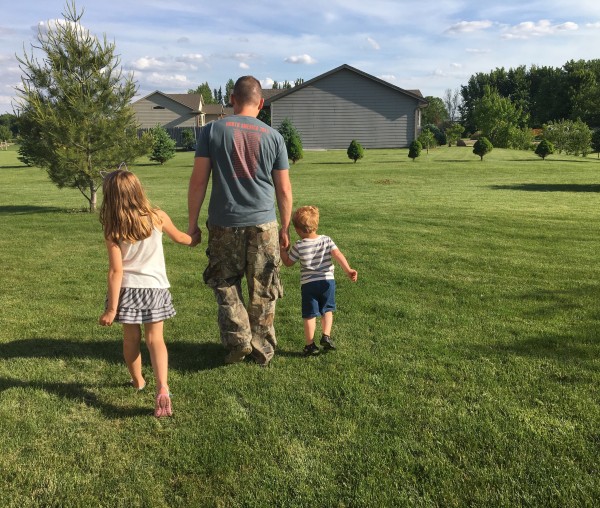 He wears the armor, carries the shield, an ever-present line of defense for his children. He blocks the harsh blows of a cruel world, the sucker punches of wickedness that attempt to empty their lungs of innocence. He carries the burden of knowing that although they consider him a hero, he doesn’t have the capacity to stave off every evil, to fully protect them from any and all harm.

He carries the weight of his footsteps and theirs. The weight of leading them down the narrow path, knowing there is no guarantee they will follow. His feet trudge through the mud, the weeds, the barren land as he guides them through this messy and uncomfortable life. He walks through the shadows with them, praying that even when it’s scary they will continue to walk towards the light.

He carries the pressure of teaching the hard but necessary lessons, that they might one day be able to navigate this life without him. He works hard to train them up in the way they should go, but his pursuit is not without failure. They watch him, he knows, and he carries with him the pressure to be a worthy role model while knowing that sometimes he’ll fall short.

Every hour. Every day.

He Carries the Weight of Fatherhood
The Fight for Fatherhood and the Gift of Perspective
When they made fathers . . . breaking the mold
advertisement

He Carries the Weight of Fatherhood
The Fight for Fatherhood and the Gift of Perspective
When they made fathers . . . breaking the mold