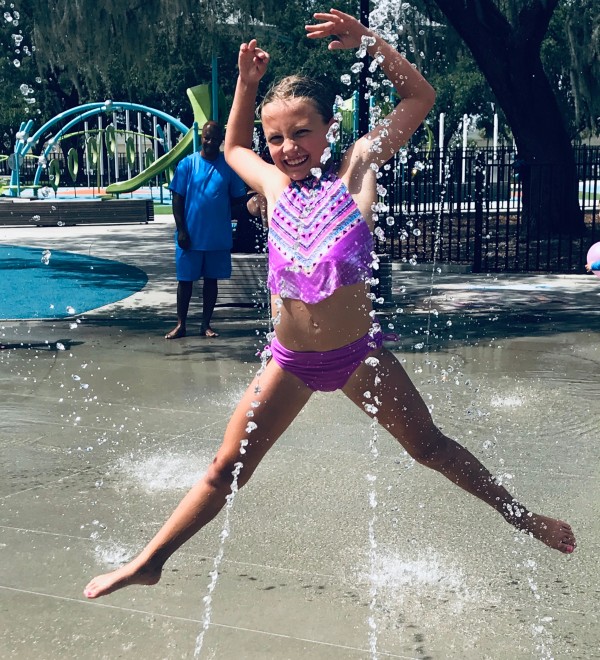 I hate when I see things I don't want to see.

I also hate to use the word "hate," cause I'm a mom of three kids under the age of eight and as I've brought them up, I've encouraged them to steer clear of the severe dislike of anything or anyone.

Is that a bit juvenile? Perhaps, but in a world plagued by hostility, I adhere to the notion that a healthy mind stays that way when we remove repugnance not just from our repertoire, but our heads and hearts, as well.

All that noted, I hate when I see things I don't want to see, and today, I hated what I saw.

On a sweltering summer day here in Florida, my three kids and I went to a local splash pad to soak up an appropriate amount of sunshine, run around and then dunk our toasted biscuits in the recycled, but still refreshing water.

I sat on one of the nearby benches and in my typical helicopter-mom fashion, watched my kids like a hawk, only occasionally glancing in the direction of the other park goers.

At one point, a man and a woman attempted to gather their belongings and their three young children to leave the park. They also wanted to take their pink plastic ball with them, as it belonged to them.

A young boy and his sister (not these parents' kids) had been playing with the ball from the time they arrived at the splash pad and found it.

The kids never asked around to find out whose ball it was or to inquire as to whether it was okay for them to play with it, and neither did their parent.

Okay, kids will be kids, right?

I mean it's really no big deal that two excited kids weren't thinking and just started playing with something that belonged to someone else.

For me, as a parent, whenever we are in a public place (or anywhere), and my kids make a beeline towards a toy, ride-on, ball or anything that isn't ours, I always instruct them not to touch it at all or until we find out whose it is and whether or not they want to allow us to enjoy the item.

If something is someone else's, well then they have the right to choose if they want to share it with others.

Still, who I am to judge those kids and that mom.

Perhaps the momma had a long day and was in her head about something, a bit disengaged from her kids and surroundings, and correct park etiquette just wasn't on her mind.

Or she wrongly assumed the ball was fair game as a splash pad toy provided by the city, and therefore she deemed any instructions to her children regarding toy use manners, unnecessary.

Now, back to the couple trying to leave the area with their belongings.

The mother politely went up to the little boy who had their ball and asked for it back.

She made a second attempt.

She tried one more time, and this time, the boy acknowledged her presence with a careless smirk and then backed to ignoring her.

She walked back over to the husband, and they both shook their heads in disbelief. It made them chuckle a bit, I think to see such blatant disregard for respecting others, and another's property, especially when they had exercised kindness in allowing the children to play with a toy that belonged to their family.

Sometimes when you are so flabbergasted by someone actions instead of getting angry, upset, you involuntarily laugh because such rudeness is just so unbelievable.

I kept watching, while still maintaining a close eye on my kids, of course.

I saw the husband scan the crowd of adults for these kids' parent.

He found her, I believe.

Because I think I found her as well.

She wasn't oblivious to what was happening.

She saw it go down and she did nothing.

This time, the husband, calm as could be, approached the young boy and asked for the ball.

The kid not only didn't give the ball to the adult; he didn't acknowledge the man's presence and then turned his back on him as he continued to play with the ball.

I could see the shock on his face.

If his face had met mine, at the time, he would have seen me wearing the same disgusted look.

Now came the final effort for these folks to leave the park with everyone and everything they came with.

The man jovially and kindly requested "Hey Big Guy, can we please get our ball back?"

The boy just stared at him, as if he didn't deserve a response. He then turned away from the man with the ball, only to turn right back and throw it at the man and walk away.

And, don't think this boy was nonverbal, because he spoke to his mother, his sister and in passing, my children, just fine.

He was just rude, and I'll just say it, so was his mother by not stepping in and guiding her children on appropriate behavior at a park, towards adults and in how we interact with strangers.

The couple whose ball was taken were rockstars. During the whole incident, at no point did either adult raise their voice, attempt to intimidate, or express frustration even though I have to assume they must have surely been feeling a bit annoyed.

I was just a bystander -- alright, a little bit of a nosy Nancy -- and I even I was annoyed.

But, here's what I took away from the events of the afternoon and the only reason I came to this revelation is thanks to two really goodhearted humans who could have made a bad situation worse, but instead, rode out the uncomfortable scene with total grace:

We have no say in how other people treat us, but we have full control over how we respond to mistreatment.

As parents, we must be an unwavering example of goodness and the hardest time to exemplify such is when you standing face to face with unresponsive reverence be it in pint-sized child form, or their caretaking adult.

I learned a lesson from two strangers today who have no idea I was watching them. But, that's the thing about being a good person in a world full of some not so good people, you don't think anyone is watching, and you don't believe you are making a difference, but you are.

For those with kids, our kids are watching us all the time, and though on this day, mine probably pondered why I was snooping on the others around us, the fact is that we have to always be mindful of what is happening around us, even if something is not directly to us.

And, we have to be conscious of what we are teaching our children by how we react to those things.

I may have hated the behavior of one parent and her two kids, which I was privy to on this day, but I loved seeing two other model parents react and respond to negativity with positivity.

And, that was enough for me to realize that hating to see hate -- like I do -- is still hate.

So, what can and should people do when they see or are on the receiving end of acts of malice?

Counter the behavior with amiability, patience, tolerance, and decency -- meaning don't kill em with kindness, save them (and yourself) with it.

The Bully's Moms is in Denial, the Dad Makes Excuses
How Baby Dolls Prep Boys To Be Great Men
Life Lessons Learned at the Amusement Park
advertisement

The Bully's Moms is in Denial, the Dad Makes Excuses
How Baby Dolls Prep Boys To Be Great Men
Life Lessons Learned at the Amusement Park