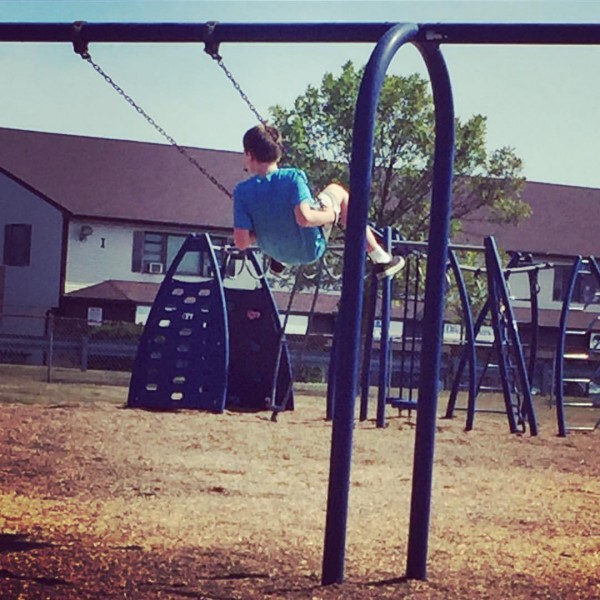 Happy Mother's Day! It's your day to relax and unwind!

Just kidding! You're an autism mom. You're still doing the same damn stuff you do all the other 364 days a year! Schedule to keep Moms!! Chop! Chop!

And because you're an autism mom, you know that it will be a better day with the schedule even if it means doing the stuff you don't really want to do for the hundredth time. (Oh, we're going on a train ride? Fantastic!)

And because you are an autism mom, you will still find yourself awake at 3AM. Might be because your kid is DONE sleeping for the night or the one night they do sleep, your body clock will wake you up because that kid of yours trained you down to your very DNA. This is a GREAT time to lie in bed and stare at your ceiling. Crank that panic attack to eleven and really get your worry on.

And because you're an autism mom, maybe someone in your family might make you a special meal. Which will be nice to have company in the kitchen while your cooking french fries and hot dogs again for your kiddo because you need them to eat. Where's the vegetables? You mean that 1/16 of a serving they get from Trader Joe's Veggie chips doesn't count? Imagine that! The next thing you'll tell me is that "Fruit Snacks" contain no actual fruit! Madness!

Or maybe you will all go out to eat but you'll still find yourself cooking before you go because you're an autism mom. You know it's better to have them fed and waiting than hungry and waiting. You'll channel your inner mountain Sherpa and pack that mighty Mom purse with all the creations that Apple technology ever invented to keep them entertained. You probably won't even get to pick a place you want to eat at because you're an autism mom. You'll know to go where there's a slight chance they might eat. If it has a liquor licence and doesn't have a drive thru window, that'll be fancy. Put on your "good" yoga pants!

And because you're an autism mom, you'll get an art project present that they "made" in school. By made I mean you'll know 80% of it was made by the teacher's aide. You might find yourself thinking "Maybe I'll drop this off at the aide's mother's house so they can get a project from their kid." but you will smile and make a huge fuss anyway about it. At least someone thought of you even if you are not sure if your kid did.

And because you're an autism mom, someone will make a point of tell you how you are so extra special but you won't feel it. They'll remark that they simply "don't know how you do it" and that "God only gives special kids to special people". You might think "Bullshit! I'm just this kid's mom. I'm just being a mom. Who else is going to do it? Are non autistic kids NOT special? They are to their moms." But you'll smile and nod because hey, someone is just being nice to you.

And because you're an autism mom you will love your child with a passion that borders on fierce. You know no one will be safe if they so much as disturb a hair on your kid's head.

And because you're an autism mom, you will totally understand if a fellow autism mom calls you up in a rage over a wrong towards their own child. You'll offer to post bail or help hide the body.

And because you're an autism mom, you will second, third and fourth guess yourself a lot. Some stuff will work. Others? Pfffffffft!

But because you are an autism mom, you will take a deep breath and try again.

Oh and order another side of fries. (At least that's what this autism mom does.)

A letter to the new autism parent from an autism parent vet
A Real Mom's Guide to Enjoying Mother's Day
Dear Stepmom On Mother’s Day: It’s OK To Feel Weird