Happy Halloween: Enjoy the costumes and carnivals and trick-or-treating while they last 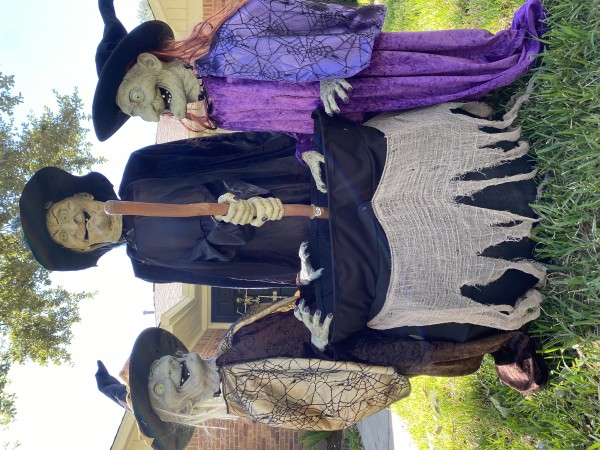 My youngest child went to middle school this year, so it’s the first year we don’t have an elementary-aged child in our house. This year, our neighborhood elementary school had an early trick-or-treat event in which the kids could walk a few blocks (including ours) to collect their candy two days before Halloween, hitting up houses that volunteered to participate.

We put out a card table and a bowl of candy and pulled up a couple of chairs for my husband and me. We turned on the three talking witches that are always in our yard at Halloween, a purchase from years ago that has proven its worth as, year after year, countless children stand by the witches for Halloween photos.

We saw the parents coming down the block, mostly in groups, gathering together to walk the blocks with their kids. Some were pushing strollers like we used to. Some were yelling at their kids to slow down like we used to. Many were reminding their children to only take one piece of candy, to say “please” and “thank you,” to look the adults in the eyes.

There were two princess sisters, the younger one walking straight up to the witches while the older one stayed close to her mom. There was a Harry Potter who tried to figure out how the witches were talking. One little girl told us her baby sister had poop on her costume and had to change before they came.

Several kids tried to sneak more than one piece of candy, and many older siblings coached their younger ones just to take one piece. The blow-up dinosaurs waddled up the sidewalk. The Spider Man ran ahead to the next house while I talked with his mom.

This year my kids are 6th, 9th, and 12th grade, so our Halloween traditions are changing. My husband still took them to the Spirit Halloween store. They’re not scared anymore of the ghouls and creepy decor, but I can still remember having to sit outside the store with the youngest until the year he finally decided to grip my hand and walk inside, hands over his eyes.

“Mr. Bones” the talking skeleton still hangs on our front door, but the teens no longer push the button that makes him talk when they let themselves into the house. The Halloween children’s books haven’t come out of the shelf. We forgot to carve a pumpkin.

After 12 years of going to the elementary carnival, donating drinks and working our shifts, this year the oldest worked a carnival volunteer shift and the youngest went with his friends alone. I admit, I did not miss the carnival. Super fun for the kids, I was always overwhelmed by the crowds, the noise, the heat, and making sure my kids didn’t run into the street or disappear.

This year, my daughter bought her costume with a friend and has plans for a high school Halloween party. My sons both have plans with their friends for Halloween evening, too. This year is looking different.

I often tell people with young children that I feel like I’ve come out of the fog that they’re still muddling through. The physicality of having young children is exhausting, no doubt. Those little ones depend on your presence for everything, sunrise to bedtime, and even overnight. They need you for safety, transportation, guidance, food, bathing, wiping bums. They need you for everything, and the fog is thick.

But your unicorns, super heroes, pumpkins and princesses will get older, and one day you won’t have an elementary carnival to attend. Admittedly, there is some relief with not having the hands-on physical work of raising young children. If I never go to another elementary carnival, it’ll be too soon. The emotional work of having teens is rough, but they can make themselves a sandwich, put themselves in the shower, and stay home alone while I run errands.

At some point in the parenting journey, you move from exhaustion (getting everyone costumed, walking the streets), to relief (no more carnivals), to nostalgia (where has the time gone?). In the blink of an eye, your Spider Man will be a high schooler in a hot dog costume.

As we sat outside for the elementary trick-or-treaters, I was flooded with memories. I remembered 2006, when we only walked one block with a 2-year-old Snow White. 2008, when my son refused the Elmo costume and, instead, trick-or-treated stone-faced in the stroller. 2012, when the youngest was a football player because he would tackle anything in his path.

2014, when my daughter was the green-faced Wicked Witch of the West and the older boy down the street told her her face looked like poop. 2015, when the middle one made a table to categorize what candy he got. 2017, when it was raining and we hurried home to watch the Astros play in the World Series.

And then came the years where they started peeling off with their friends. Halloween after Halloween, we walked the streets with one, then two, then three kids, which eventually became two kids, then one kid again. This year, maybe we’ll walk alone, or maybe we’ll just sit on the driveway with the candy and remember.

If you’re in the boots-on-the-ground stage, absorb it all. Take the photos. Walk the block. Read the books and carve the pumpkins. Remind your kids to say “please” and “thank you” and “Happy Halloween.” These are the experiences that will build the memories. And these are the memories that will be your kids’ foundation. And one day, like me, you’ll be sitting on the driveway watching the little ones, at once relieved to be sitting and nostalgic that time keeps marching on.