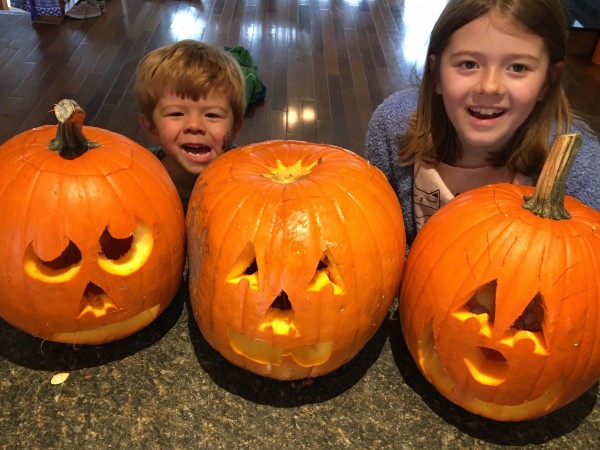 I had big plans for the month.

Plans to make the most of what is arguably the best season of the year, with its cool days, cozy sweaters, and crunchy leaves.

I was going to take my kids to the pumpkin patch.

And to the corn maze.

I was going to coordinate their costumes.

I was going to take them to Trunk-or-Treat and Boo at the Zoo.

We were going to enjoy a hay ride, and eat candy apples, and capture images of perfect autumn days.

But none of that happened.

Instead, I picked up some pumpkins from the grocery story and am dressing them in a combination of clearance costumes from two years ago and cheapo accessories that showed up on my doorstep just in time, thanks to two-day shipping.

I could go around calling myself a failure because we didn't partake in all of the season's so-called fun. But I won't.

Because we're enjoying a good old-fashioned October, that in all its simplicity, has produced happy kids. Where carving grocery store pumpkins and wearing not-too-impressive-but-still-good-enough costumes are sufficient. Well, as long as there's candy too, because that's what really matters, right?

There's a lot happening out there. So much to do. And the pressure to do it all is high.

But we don't actually have to do any of it.

Because it turns out that a little bit of special right here at home is all my kids need.

Pick Your Battles
Here’s why it’s OK to not like your kids
Where are the Halloweens of our childhoods?
advertisement

Pick Your Battles
Here’s why it’s OK to not like your kids
Where are the Halloweens of our childhoods?