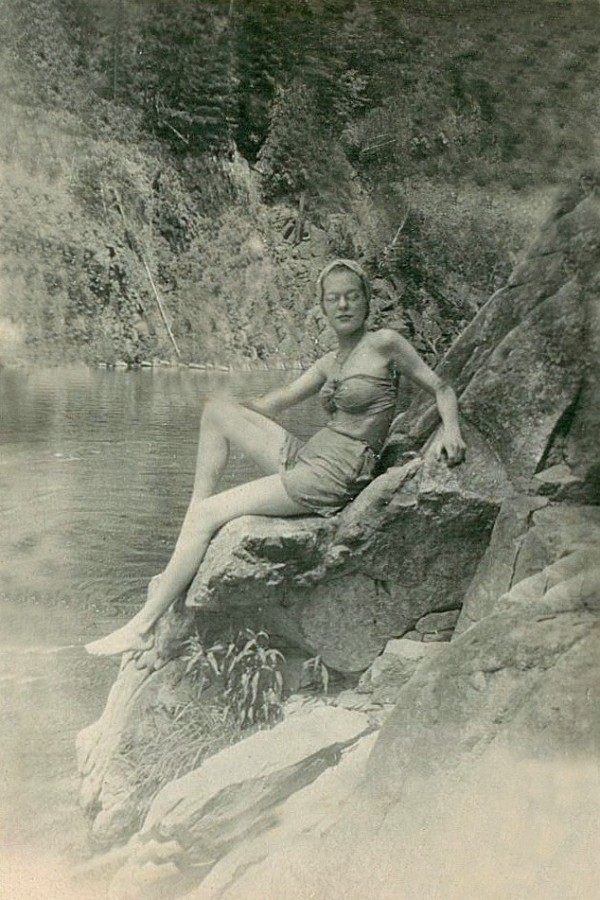 My beautiful grandmother at her favorite swimming spot as a young woman.

The term soulmate has almost always been used in the romantic sense. It's always applied as two people madly in love, almost predestined to be together. Yet, nobody talks about the other kind of soulmate. Nor the fact that you can have more than one!


The kind where you know without a doubt that God made the two of you out of the same "stuff" before sending you down to Earth. You don't have to be the same age, related or even both human (pets count too!)

But for me, I know without a doubt that one of my soulmates was my grandmother.

Today would have been her 89th birthday, but she left us a month after her 71st. She left us the day after my 16th birthday, and I will forever be grateful to her that she held on and didn't pass away on my birthday because the heartache would have followed me every birthday there after for the rest of my life.

My grandmother, my mother's mother, was feisty, smart and took no crap from anyone. She was just as loving, kind and giving as she was fiery. She wrote "143" on every birthday card of the people she loved. She loved watching her "programs" and had the kind of laugh that if I close my eyes and listen just hard enough, I can still hear almost 18 years after she's been gone.

She lived for her family. She loved her four babies with everything she had and I can see the kind of mother she was in my mother and her siblings. They are all genuine reflections of the kind of love their mother gave them.

She loved her babies' babies just as much, with nine grandchildren to spoil with the kind of love only a grandmother can give. I feel so blessed to have been one of them.

Her and my grandfather had their good times and bad, but I could always feel the love they had for one another when I'd enter the front door of their home. I remember the sadness in his sweet eyes the day she died, the unique kind of loss that can only be seen in the eyes of a person that has lost their companion of so many years and love of their lives.

At her funeral, my mother and aunt picked the poem, "Afterglow" for the little cards that are given out. As a teenager I didn't quite put much thought into it, but now as an adult I read that poem and I understand why.

Not everyone can have this kind of effect on those they leave behind. The kind of impact that their death marks a before and after in the lives of the people that loved her. She left pieces of her with each of those that loved her. We all carry her with us everyday.

Gram and I were made from the same stuff. I have always pictured God as having a gigantic cupboard of things he uses to create us. He used the same jar when creating the two of us. I have the same fire she had inside of her, but with a helper's heart to accompany it just as she had. I love many of the same things she did, not by force or memory but because I genuinely love them too. And I know that the kind of mother I am is because of her and the girl she raised that would become my own mother.

In all of these things, she left an afterglow.

All we can hope for in this life is to leave an afterglow in the hearts and minds of those we loved in our time here. For my grandmother, she did this and so much more.