We just dropped our son off at college, and on the long car ride home it occurred to me he’s beginning his sophomore year and I have no idea how his first year went.

I do know he adjusted well to his new environment hundreds of miles away from home. He made some good friends and got involved in interesting clubs. He often spoke highly of his professors and classes. He even acquired a part-time job where he earned a little spending money.

However, I do not know what final grades he earned freshman year. I am unaware of his current GPA. 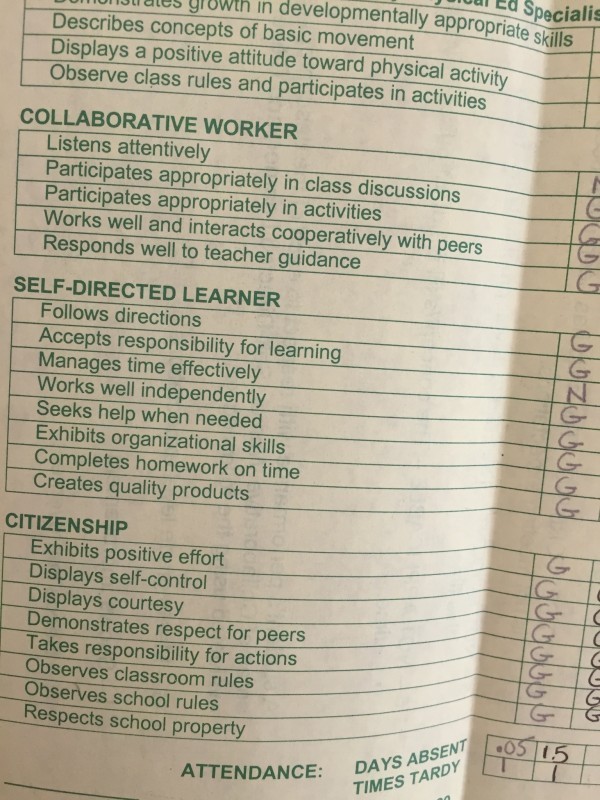 When my son was in high school it seemed the entire family was hyper-aware of his academic performance. A high-achieving student, he had his sights set on certain colleges, and was constantly calculating and recalculating exactly what grades, GPA, SAT and ACT scores he thought he’d need to be considered for admission to these selective schools.

With those high-stress high school days behind him (and us), my son is far less preoccupied with his grades. And even though he’s given us computer access to his grade reports through the campus portal, I’ve never even logged in.

The truth is, I just don’t care.

It has me thinking back to the last time I didn’t care about my son’s school grades. It was when he was in kindergarten, fifteen years ago.

That earliest school year our academic expectations for our little learner were so simple: identify the letters of the alphabet, practice counting to 100, maybe recognize a handful of words.

Yet there was so much other learning going on in that kindergarten classroom, important learning, such as: how to be kind and helpful, how to play well with others, how to be patient and wait your turn.

And aren’t these lessons learned so much more important than any grade on a report card? After all, we’re not launching students into the world. We’re launching human beings.

So my son didn’t tell me about his first-year college grades. And I have no intention of asking him about them.

Because at this point it matters more that he is interacting positively with his peers, and is making good friends who share his values.

It matters more that he is delving into topics that interest him, and is learning with passion and enthusiasm.

It matters more that he is accepting responsibility for his own learning, and is managing his time and commitments.

It matters more that he is solving his own problems, and learning that while he won’t always have the outcome he desires in every situation, he can always make changes, and try again.

It matters more that he recognizes when he can’t handle all of it on his own, and is willing to seek help from his teachers and advisors.

It matters more that he is kind and courteous, demonstrates respect for others, and possesses integrity.

Fifteen school years later we’re back where we started.

Looking at a kindergarten report card, and realizing this was all that ever really mattered.

Cheryl Gottlieb Boxer resides in New Jersey, where she micromanages a husband, two teenage children, and a confounding cockapoo. Her writing has appeared in The Mighty, Grown & Flown, Kveller, Her View From Home, Sammiches & Psych Meds, Parent Co., Motherly and CollegiateParent.

​My Kid Failed The Gifted Test. Guess What? I Don’t Care.
Kordell Dorman - Senior 2020
2 Things We Thought About Before Redshirting Our Son
advertisement

​My Kid Failed The Gifted Test. Guess What? I Don’t Care.
Kordell Dorman - Senior 2020
2 Things We Thought About Before Redshirting Our Son