Published by Greg Schwem on February 1, 2017 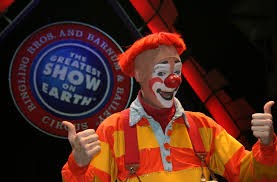 It has been less than a month and I’m still struggling to comprehend how such a nonsensical idea became reality.

But let’s not talk about the presidential election.

I’m referring to the Ringling Bros. and Barnum & Bailey Circus’ decision to close “The Greatest Show on Earth.” Permanently. After 146 years. Like the discount record store, the TV with three channels and the Blockbuster video chain, the circus has officially fallen into the “Grandpa, what did you do for fun in the old days?” abyss.

Feld Entertainment, the circus’ owner, finally bowed to rising operating costs, coupled with declining attendance. A costly legal battle with animal rights groups over the treatment of elephants didn’t help. Furthermore, as Kenneth Feld, chairman and CEO of Feld Entertainment, told the Associated Press, the circus could no longer relate to its target audience: kids. Raised on a steady diet of video games, children were less impressed with daredevil acts and musical pageantry. Incidentally, kids today are equally unimpressed with words like “pageantry.”

Growing up, I attended the circus twice. My children, now 20 and 14, each experienced their own special day at the circus. If I tore apart their bedrooms, I’m certain I could find a circus souvenir they never parted with, be it a splashy color program featuring biographies of circus legends like Gunther Gebel-Williams, or a pinwheel that sparkles when it meets a gentle breeze.

No, the circus doesn’t need to close; it just needs to be updated to reflect kids’ changing entertainment whims. And I have some ideas.

Let’s start with what the circus already contains: three rings. That’s right, three individual stages of constantly changing entertainment. It seems like the ideal setup for your average child over 8, who has proven adept at scrolling an iPad while simultaneously posting selfies to Instagram and updating musical playlists. Keep the rings.

Now it’s time to make the circus more interactive. Begin with the center ring, the mainstage of daredevil circus acts. Rather than use a professionally trained “launchee” (or whatever word describes a performer whose LinkedIn profile includes “shot from a cannon nightly and twice on Saturdays”), ask for an audience volunteer, preferably between the ages of 11 and 17. Shouldn’t take long. Remember, this is a generation that takes credit for, among other acts of brazen stupidity, the Cinnamon Challenge, the Condom Challenge and the Kylie Jenner Lip Challenge. All are well documented on YouTube, proving the desire for viral fame far outweighs any regard for personal safety. Simply tell the volunteer his or her performance will be available on social media mere seconds after the explosion. BOOM!

Ring two will be renamed the “selfie ring.” Instead of having exotic creatures jump on platforms and flail at a trainer’s stick while audience members cover their eyes and hold their breaths, tell kids to bring their iPhones to the arena floor and climb on the platform with the animal of their choice. No kid’s Snapchat account is complete without at least one photo and an accompanying caption tantamount to “Here’s me with a camel,” “Here’s me with a dancing poodle” or “Yes, that’s a vicious tiger but look who’s next to it: ME!” Even members of the circus’ arch nemesis, People for the Ethical Treatment of Animals, might find their cause stymied. By their own children.

Finally, let’s rename the third ring the “Outclown a Clown” stage. Kids can come down and try their favorite clown tricks. Put 24 clowns in a car? I’ll bet my daughter and 25 of her friends can beat that. While the circus’ professional clowns watch in amusement, audience “clowns” alternate between dabbing, searching for Pokemon Go characters, and standing like mannequins or whatever the latest internet craze happens to be. Again, cellphones are a necessity.

It might not be the greatest show on earth, but it will certainly be the most realistic.

The Circus Changeling
The Wedding Clown
History of a Long Shirt