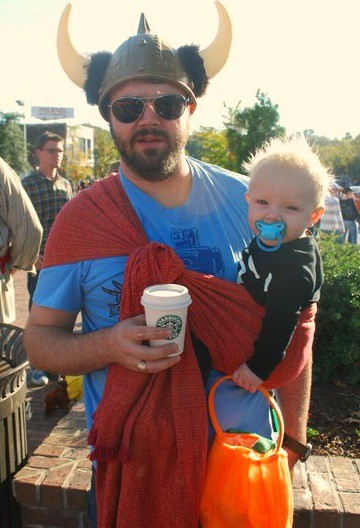 The ends of the fabric dragged on the ground as he wrapped them around and around himself. When Bear had finished, he looked like some kind of cut-rate Jedi, all drooping brown shoulders and waistbelt.

“Okay, I think that’s right,” I said from the hospital bed.

He picked up our tiny newborn son. The baby splayed his chicken legs and arms as Bear lifted him to his shoulder and slowly lowered him into the fabric. He cradled Falcon in one shoulder, then lifted the middle up to hold him snugly in place. Suddenly, the mass of fabric resolved itself into a taut, cuddly baby carrier.

“He looks wrapped right to me,” I ventured, though I had never wrapped a baby in my life. That came later. But Bear was the first to wear a baby.

He didn’t stop wearing our firstborn in the hospital. Baby Falcon lived in his Moby wrap, and when I wasn’t wearing him, Bear was. He complained, in fact, that I hogged more than my fair share of baby time. He used the Moby wrap as well as I did, and spent time cuddling and kissing Blaise. When I moved on to woven wraps, he stayed right with me, doing the same old Moby-wrap hug hold with Falcon.

Bear does a lot for our three sons. He cooks, he cleans, he teaches them about science and nature. He reads them dinosaur book after dinosaur book, and patiently answers, over and over, what the biggest dinosaur was. But through all the superdad stuff, the bike riding and the playing catch and the playground hours, he’s never hesitated when they ask “Daddy, pick me up.” 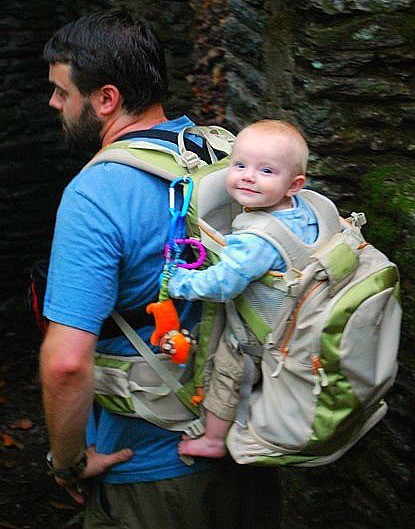 Because we love to hike, Bear bought a hiking backpack as soon as Falcon hit the age limit for it. Falcon spent hours riding through the woods on Daddy’s back. Bear always brings the backpack, even when it’s empty, because he knows that somewhere down the trail, three-year-old Baby Bear will whine, “Daddy, my legs tired.” And up he’ll go into the pack. Falcon gets mad he’s too big to ride in it now.

Bear wearing our kids is an unremarkable part of life. He wraps 18 month old Sunny when he goes to the grocery store. He wraps Sunny or Baby Bear every Sunday at church, both to get cuddles and to cut down on the toddler wiggles. He wraps Sunny when he’s sad and I’m not home to comfort him; he even backwraps him. It’s the fabric of our lives.

Bear’s most heroic babywearing came when Baby Bear decided he would not sleep. Nothing helped - no nursing, no cuddling, no magic formula would convince him to fall into dreamland. Only one thing worked: back carrying and bouncing on a yoga ball. Bear gamely put Baby Bear on his back, night after night, in either a wrap or a mei tai, and bounced. This phase lasted for months. Every night, I’d ask if he wanted me to get Baby Bear to sleep. And every night, Bear said that he would do it. He sat in front of the computer and bounced, and bounced, and bounced until Baby Bear’s head lolled down against his neck and he finally fell asleep. He never complained.

With Sunny at 18 months, the uppies aren’t so frequent now. But Bear still finds time to wrap Sunny at Target, or put Baby Bear in the backpack. The kids always know that unless he’s already toting someone, there’s only one answer to “Daddy, pick me up.”

They’re already getting bigger. They don’t want carried so much. I miss the baby cuddles already, and so does Bear. But for now, carrying is a gift he can give them. No one carries you like your daddy can. No one will ever have such strong arms, such a broad back, such a warm touch. I hope our sons remember that. I know they will.

Do What You Love (And Drag the Kids Along)
How I'm Learning to Trust My Gut as a Parent
Afraid of Discussing Sex with Your Littles? Why I Practice the Everyday Sex Talk.
advertisement

Do What You Love (And Drag the Kids Along)
How I'm Learning to Trust My Gut as a Parent
Afraid of Discussing Sex with Your Littles? Why I Practice the Everyday Sex Talk.