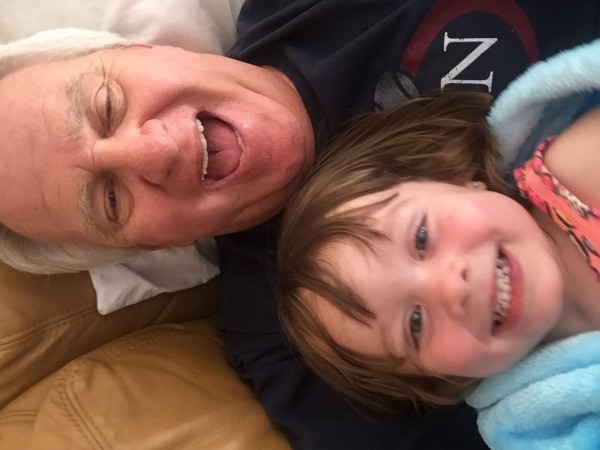 I’ve had a couple of occasions the past two months to slow down and reflect on fatherhood. We recently attended the wedding of one of my best friend’s daughters. They have three lovely daughters and this was their second wedding. I didn’t envy him his task. “Her mother and I do,” has been recited for many centuries after a father has walked his daughter down the aisle. I’m sure for those centuries it was no easy assignment for dear old Dad. It wouldn’t be for me.

My only daughter was sitting next to me and I imagined how I would handle it. I’d be sobbing like the kid who dropped his ice cream cone as I played the video in my mind of life with my daughter. I would feel I earned that spot on the aisle because of all the time I spent with her. It wouldn’t be that I “owned” her to give her away. It would be a statement to her groom that I am a part of who she is. That I held her as an infant making her coo and smile. That I held her small hand as we skipped in the waves at the beach. That I taught her to ride a bike, add a row of numbers, how to hit a softball and how to drive. That I was the first man who loved her. It would be a silent message to the groom, “Many of the things you love about her I helped make.”

The month before, I attended the funeral of the mother of another close friend. It was heartwarming to hear of a long life well lived. They had a wonderful singer who sang the 23rd Psalm, “The Lord is my shepherd; I shall not want.” I knew the words but I had never heard it sung and it gave me time to think about them. I grasped upon a thread of a thought as the music echoed throughout the chapel. If the Lord is my shepherd, then I am the sheepdog. We had a beautiful Old English Sheepdog, Bella. I found a place to train her to herd sheep. Or, as the trainer often reminded me, the training was for me. Bella had five thousand years of instinct showing her what to do. I learned firsthand the purpose of a sheepdog. To help the shepherd protect the sheep. To keep them from harm. To watch over them day and night. To help the shepherd direct them to pastures and water. And, yes, every now and then to bark to keep them heading in the right direction. That, I quietly reflected, was my high calling as a father.

There are so many studies which validate what we all know to be true. A father has a positive impact on his daughter. But being a father is hard work. If you’re lucky, you had a couple of nieces and nephews or kids of good friends with whom to practice. You could play with them, roll around in the dirt, stomp through puddles, feed them pizza and candy, give them back and go on your way. With your own kids the work is doubled as you’d have to help clean up the mess, give them a bath, wash their clothes, read them a story, read it again, give them the final, final go to sleep order and be on call throughout the night. Do that for 365 days times ten years and no wonder there are bags under your eyes and your belt doesn’t cinch as tightly as it used to. Seventeen years ago, one of my sisters blessedly offered to watch our kids as my wife and I went on a cruise for our ten-year anniversary. At sea we slept all day. We went on excursions to beaches at every stop and slept on the beach. We only left our cabin to eat. We packed ten years of missed sleep on that trip. We could have saved money if we just stayed at a hotel nearby.

And now my life blessings are infinitely multiplied as I “herd” grandkids to the tot park, to the beach, in the pool or simply pull them in a wagon around the block. My step is a little slower. My back a bit sorer. My rotator cuff is strained from countless times playing “One Two Three Wheeee.” And my bark? Well, that’s silent as these little angels can do no wrong.

15 Things Every Dad Should Say to Raise Confident, Strong Daughters
He's their dad, not their babysitter
What 'This Is Us' Means to My Family
advertisement

15 Things Every Dad Should Say to Raise Confident, Strong Daughters
He's their dad, not their babysitter
What 'This Is Us' Means to My Family