Co-Resting with Kids: The Startling, the Terrifying, and the Adorable

Published by Becca Carnahan on February 25, 2019

In the early hours of the morning, I often roll over to see a small version of my face melded with my husband’s face staring back at me. I should be used to this wake up call by now, but after four years it’s still equal parts startling, terrifying, and adorable.

Startling because more often than not I was awoken from a dream about getting on a plane to Indonesia with Nick Offerman and Vanna White. We usually miss the plane due a comedy of errors. Vanna forgets her passport. Nick trades our tickets for magic beans. I get my prom dress stuck in the escalator... So waking up to find myself nose to nose with a tiny human I created who is donning some impressive bed head always feels somewhat out of the story line.

It’s terrifying because these children can be the loudest children in North America at the dinner table, but turn into ninjas in the night. Either that or I’m an incredibly sound sleeper. So that leaves us with two potential problems:

1) My children could straight up end me in the middle of the night if they got a hold of a blunt object and some untapped rage.

2) Or there could be a tornado ripping through our home and I wouldn’t know until a kid came and tapped me on the shoulder saying “I need to go potty, and by the way we don’t have a roof anymore.”

But then there’s the adorable part. The "sure come on into the bed" part. The “Mommy, can you put your head next to my head?” part.

Very rarely do we all get back to sleep, especially if our bed made for two suddenly becomes a 6am party of four. And sure I’ve gotten two black eyes and bloody nose from flying elbows that seem to have a preschool life of their own.

But then there is the brief moment of calm, when everyone is settled in and deep breaths go in and out. The whirlwind of the day ahead hasn’t started to whirl. My whole world is right there within arms reach. I remember all of the times I dreamed of exactly what I have now and soak in the sweetness of my family. 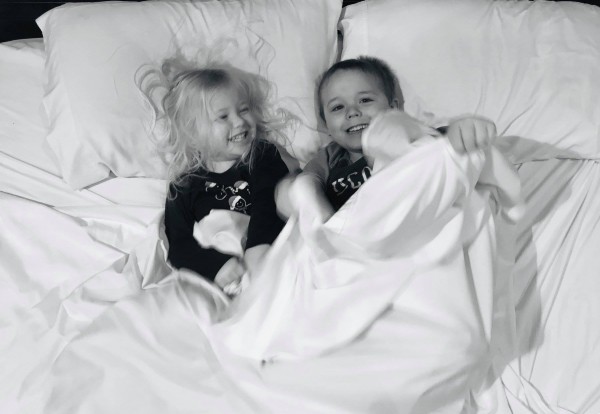 And then someone starts throwing miniature punches, someone else is cold, even though everyone was awake way too early somehow we are running late and no one wants to wear weather appropriate clothing.

Well, it was nice while it lasted.

Wash Your Hands, Ya Filthy Animal
‘Twas the Night Before Christmas…with 3 Kids
How To Calm Your Child Before Kindergarten
advertisement

Wash Your Hands, Ya Filthy Animal
‘Twas the Night Before Christmas…with 3 Kids
How To Calm Your Child Before Kindergarten