Published by Shannon Armenis on October 7, 2020 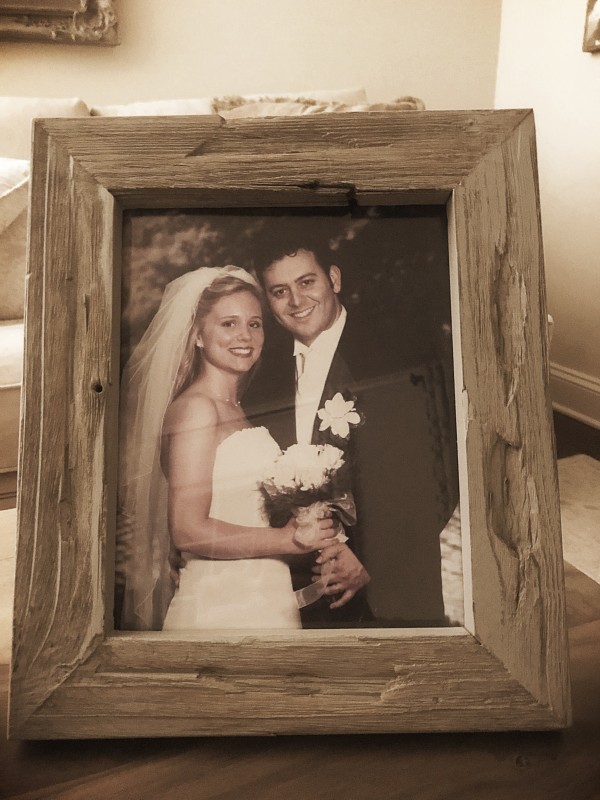 My husband and I went to a wedding a few weeks ago and I have come to realize weddings are one of those things you either love attending or simply go because you feel obligated. I love weddings. Honestly, what’s not to love about an event surrounded by smiles layered with happiness and optimism, topped off with an open bar, dance floor, and hopefully a few 90’s hip hop songs?

As I think it does for most people, each wedding I attend always floats memories of our own wedding day to surface. I think back to the day we stood with crowns on each of our heads connected by ribbon, at the front of a little Greek Orthodox church tucked away on a side street in Baltimore. And how when we fell into bed at the end of the night, it felt like a dream because the day had gone so fast that neither of us had even had the chance to eat our dinner. How all the decisions that had seemed so important during the prior year of planning faded into the background unnoticed. Through all the culture compromises, flower arrangements, seating charts, and attempts to appease our families, what stands out the most about that day is us.

We may have shared an optimistic naivety about marriage that day, but we decided we were in this life together moving forward. I also always assumed those were the exact words coming from the priest’s mouth during our ceremony, but I don’t speak Greek so I decided to trust that God had my back on that one.

But that’s kind of what marriage is, isn’t it? It’s putting your faith into another person and trusting that person to have your back until one of you dies. The concept is simplistic, however, for anyone that has been or is married, the journey to this accomplishment can be treacherous and daunting, at times.

It’s like the climbers that attempt to climb Mount Everest. I imagine at the bottom during the beginning of their journey, they are optimistic and proud to be attempting such a difficult task and I imagine many of them even feel fully prepared for the trek, but as they climb higher and the altitude increases and it gets colder and colder and oxygen levels lower, some begin to wonder if they are too weak for the climb or crazy for even trying. Some even give up or get injured and climb back down. But a few get injured and keep on climbing.

Climbing the marriage mountain is no different. I have friends who are divorced. I have friends who have been on the verge of giving up but decided to keep climbing. I have a friend who was widowed far too young and chose not to abandon her journey, but simply changed her course to the top.

Because the marriage mountain does not have a set path.

And sometimes we forget this. We see strategic photos shared on social media of other couples or families and the doubt starts to creep in. We start to wonder if we have taken the wrong path or why it is so damn hard much of the time for us but seems so easy for others.

But you see, I imagine the climbers of Mount Everest only snap their photos to document the journey when it is safe or they have just finished a really hard climb or the sun is shining and they have been overcome with the feeling of being empowered. I am fairly certain they do not pose for a selfie when they are hanging from a cliff contemplating their death or in the middle of a blizzard or on the verge of giving up. They share the near-death experiences only after they have reached the top and taken in the view.

My husband and I have not reached the top – yet. And from the conversations I have with those closest to me, they haven’t either. So I am here to report from halfway up marriage mountain that the climb is often difficult. It is filled with bickering and loud kids who seem to miss the toilet more than they hit it and arguments stemming from small and insignificant situations. A dog who loves without limits but literally barks his head off every single day between the hours of 3 pm and 5 pm. It is filled with taking care of parents, doubleheader baseball games on different fields every weekend, middle of the night trips to the ER, and date nights that are canceled because, well honestly, life gets in the way. We are torn in so many directions most of the time that we do not have an hour to ourselves, let alone with each other.

And I often wonder if the priest should have not only spoken in English during our wedding ceremony but perhaps have been a bit more specific in our vows to each other. Replaced the vague for sickness and health and for better or worse with more specific situations, you know, just to keep it real. “Do you take him to be your husband even though he will leave his items on the bathroom counter every day for all of eternity when it is in strict violation of your no personal items on bathroom counters rules, or will you take her although she will rotate black leggings on a 3-day schedule for 5 years and befriend many bottles of dry shampoo”

But then I think about if the priest had said, “Do you take this man to be your husband when he does the dishes even when he is tired because he sees just how desperate you are for a small break, or will you take this man when he works a ridiculous amount of hours just so you and your children will have not only the things you need but the things you want also.” Or, “will you take this woman to be your wife when she takes on the bulk of raising your children, when she is sick but still finds a way to wake up with the kids and make lunches with crustless sandwiches and gets them to school because she knows even though you wouldn’t complain that you still need some sleep.”

Because the climb, it’s a tricky one. It’s filled with arrogance as you celebrate on the way up and it’s being humbled while you hold on for dear life as you begin to feel yourself sliding down. It’s staying up all night with sick babies, it’s handing out grace when your husband snaps at you and it’s accepting grace when you’re not quite sure you deserve it. It’s feeling under-appreciated while not being quite sure if you are as appreciative as you should be.

And as I think back to that night we plopped into our bed on our wedding day, that’s what this life feels like much of the time. All the decisions we stress about and bicker over and all the decisions we have deemed of utter importance at times, fade into the background as we reach a new altitude.

As our boys get older and their needs shift and they become more independent, the view has changed. The climb was and still is scary and tough at times but we never once thought to take those crowns off while we were climbing. Sometimes we even remember to stop along the way on our ascent and take in the view and it is a spectacular one. It may not look the way we had always anticipated but it is still breathtaking and humbling, none the less. We never forget that it was killer sometimes but many of those memories hide in the shadows when we remember that we were never lonely.

Because we trekked it together.

And of course, get the chance to pose for a selfie.

The Top 5 Reasons Why You Should Elope
How did I almost lose my best friend?
Why I Stopped Wearing My Wedding Ring
advertisement

The Top 5 Reasons Why You Should Elope
How did I almost lose my best friend?
Why I Stopped Wearing My Wedding Ring