In an effort to share a fun moment because, as she titled the video, “It’s the simple joys in life,” Candace Payne (whose name pops up on Google when you only type “C-A-N-D-A”) has created not only a viral video but an example of supply and demand, as well as a heartbreaking lesson in “you can’t always get what you want.”

This Facebook Live video of a mother of two from the Dallas area created a run on the Chewbacca mask after she stated she purchased it for herself as she was still "rejoicing" in her birthday. The laughter captured in the video was viewed by millions of people (126,797,258 as of this writing) and created a demand for the mask causing stores throughout the country to sell out of this toy. Some purchased it because they truly want it. But sadly, it has also been purchased because of the greediness of thousands of others who have taken advantage of Candace’s infectious laughter to resell the Chewbacca masks on eBay, Amazon and other online retailers. Now, my 10-year-old son will not be rejoicing on his birthday. 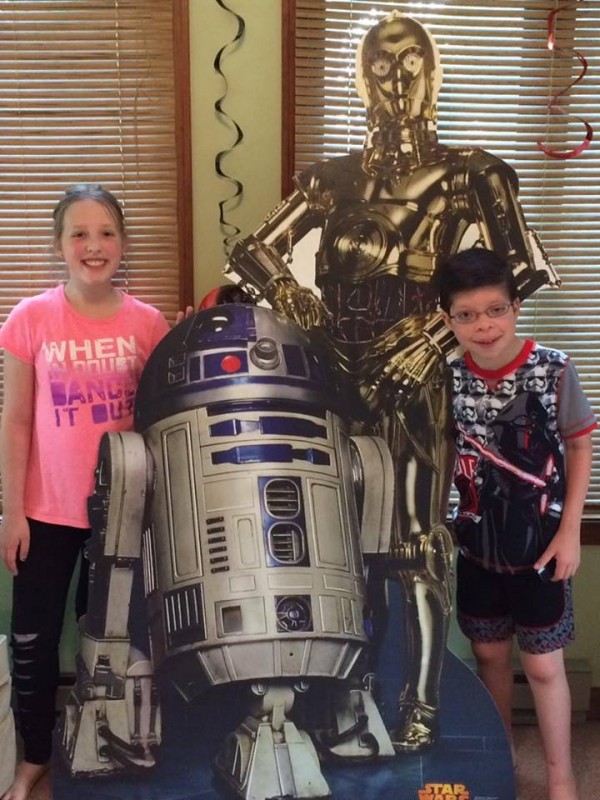 Robby with his sister, Allie, meeting the special guests at his birthday party.

For my son, this was the year! After Christmas, we bought all six Star Wars movies to watch prior to seeing “The Force Awakens” and he quickly became obsessed. He wanted his birthday parties to have a Star Wars theme. His “mock sleepover” party with friends this weekend had the boys playing Star Wars Trivia as they ate, taking pictures with R2-D2 and C3PO for a fun photo op and watching “The Force Awakens.” Little did I know as I was singing “Happy Birthday to You” to my son on Friday night, the one present he wanted was selling out everywhere!

Now I'm just praying that he didn't blow out those candles wishing for a Chewbacca mask!

For months we have seen the Chewbacca mask manufactured, by Hasbro, on the shelves at Target, Wal-Mart, Toys R Us and Kohl’s and I have been telling my son what many parents do as celebrations are approaching, “Your birthday is at the end of May, you need to wait. Someone might get it for you.” I was in the store on Wednesday and gave Chewie a wink and a smile silently saying, “You will be home with us soon!”

Last night, I found myself calling dozens of stores in Connecticut trying to track down the now elusive Chewbacca mask. I was laughed at by sales clerks who couldn’t believe they were getting another call about this toy. When calling Kohl’s I asked for the toy department and was immediately told, “If you are calling about the Chewbacca mask, we are sold out.” One kind gentleman from Toys R Us confirmed that I wasn’t crazy thinking that the mask would be on the shelves whenever I wanted to purchase it because they were always fully stocked with the toy.

Should I have purchased the mask prior to this week? I didn’t see a need! It had literally been collecting dust on the store shelves for months. They have always been there! I didn’t want to purchase the mask too early for fear of it being found. Or, as we have had with a couple of other toys, have it malfunction and mysteriously let out a Wookie call in the middle of the night from a closet spoiling the surprise.

Well, it looks like now, as Candace urged her viewers, I guess he is going to have to “stay patient” a while longer. I know it will be worth it. But Target, Kohl’s, Wal-Mart, Toys R Us, if you get a Chewbacca mask, could you put one aside for Robby? I’ll be right down!

Mom of two, wife of one and a woman working to be the best person she can be for herself and all those around her! I'm a heart attack survivor and my son and husband are both congenital heart defect survivors! Our family is all heart!!!

Five Simple Toys That Won't Break The Bank This Holiday Season
The Lessons My Littles Teach Me
Birthday insanity, courtesy of Pinterest
advertisement

Five Simple Toys That Won't Break The Bank This Holiday Season
The Lessons My Littles Teach Me
Birthday insanity, courtesy of Pinterest