Catch Me When I Fall 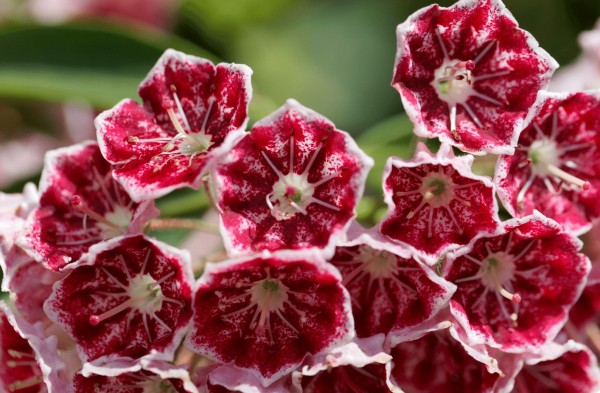 Photo of the Pennsylvania state flower, the Mountain-laurel, by weisschr

To the person who caught my father-in-law when he collapsed at Kroger on March 23 in Humble, Texas:

The man you caught was a giant of men -- to those who knew him, at least. He was born in 1933 in Pittsburgh, Pennsylvania. His mother worked in a department store, and his father worked at the Pittsburgh Press. The man you caught met the love of his life in 1955 and convinced her to go on a date with him. They went to a movie, “Love is a Many Splendored Thing,” and then to dinner at a restaurant that had a dance floor. He kept her out two hours past her 11 p.m. curfew. They married three years later and stayed married for 62 ½ years.

The man you caught lived his life with great integrity. After high school, he was drafted into the U.S. Army and trained with a tank unit in Alaska, which he thought was way too cold but otherwise enjoyed. He narrowly missed being sent to fight in the Korean War, which ended shortly before his unit was scheduled to be transferred. After getting married, he and his wife moved to Houston where he spent most of his career working at PPG Industries and, later, for Continental Airlines. He paid his bills and kept his house painted and his grass cut, and he raised his children to be good people.

He drove his family from Houston to Pittsburgh in the summers so his children would know their extended family. After a long drive, he always swam with them in the hotel pools. On one trip, he even jumped into a hotel swimming pool in his clothes to save a drowning child.

The man you caught ate cookies and milk every night before bedtime. Lately, he wanted a beer and chips every day for lunch, although his wife forced him to add a Virginia ham sandwich on pumpernickel bread. He loved sweets and hated salad. When he collapsed at the grocery store, he’d just gotten his 20-year-old car inspected and had stopped to buy bananas on the way home.

He has four adult children, two sons and two daughters. He has five grandchildren, a great-granddaughter, and a great-grandson to be born in May. He was there every single time one of us needed him. He was never not available to us. He was proud. He was good. He could be stubborn and ornery. You always knew where he stood on matters, because he wasn’t one to mince words. He was hilarious. And he was our rock.

On my wedding day, I danced with him. My then-new husband and I were facing our first bump in the road of our marriage. My husband had a new job 4 hours away from where I was starting medical school. I still remember his wise words during that dance. “In life you’re going to have a lot of these moments. It’s going to seem like everything is falling apart. But God always takes care of you, and when you look back on the situation, you realize that everything happened exactly how it was supposed to. You realize that God will never not take care of you.”

We the family don’t know exactly what happened when you caught him at Kroger. We know someone called EMS. We know he was transferred to the hospital. Your catching him meant that we got more time. It meant we could gather at the hospital and sit with him. It meant we could get our minds around the death of our beloved Jack. It meant I could tell him thank you for being an amazing father-in-law and grandfather, and thank you for raising an amazing son.

Because you caught him, my children could go in one-by-one and have private time with their grandfather before he died. They could tell him how much they loved him. It was their first experience with the end of life, and they were able to process it holding his still-warm hand. They found out how brave they were, as those one-sided conversations with their grandfather on life support were the hardest ones they’ve ever had. They did it for “Pappap.”

The reason I want to tell this story is that a random (to us) person caught what was a random (to him) person as he had a cardiac arrest and collapsed at the grocery store. A checker at the store didn’t get to finish ringing up his bananas. Someone called 911. EMS transferred him to the hospital, where healthcare workers took over his care. To these people, the man who collapsed was an elderly gentleman buying bananas. But to his family, this man was everything.

If you see someone you don’t know, treat him like you would want your own grandfather treated, whether he’s collapsing at Kroger, lying in an ICU bed, or just walking down the street. “Do not neglect hospitality to strangers, for by this some have entertained angels without knowing it.” (Hebrews 13:2).

So to the person who caught my father-in-law at Kroger, thank you. He passed away a week after his cardiac arrest. But we had extra days to get our minds around the end of his life, and those five days were a blessing. He got to hear Dolly Parton sing “I Will Always Love You,” one of his favorite songs, while his wife of 62 years held his hand. And all of us got to tell him how much he was loved.

What I wish......
To My Father-in-Law: Thank You...
Signs From Heaven
advertisement