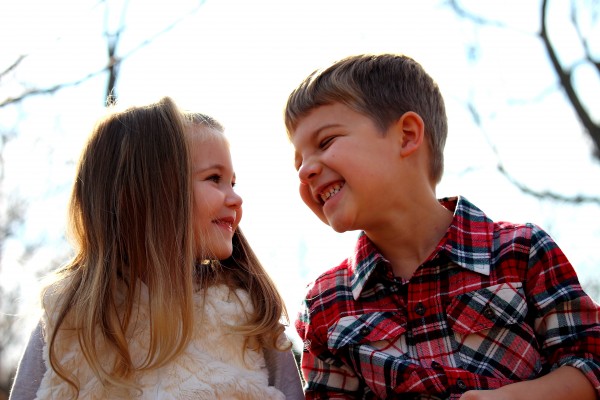 I grew up as the middle child, squished between a pair of sisters and a much older brother. My sisters and I shared a room together and were the best of playmates. Sure, we had our fair share of arguments, but we were the best of friends. My dad always made sure we knew how lucky we were to have each other. He always made us hug and make up if we fought and never allowed us to carry on squabbles. So, we had to work things out and work together for the benefit of each other. This also meant we did a lot of our fighting behind closed doors so that our parents wouldn’t find out. But this only made us closer and our bond stronger.

When my husband and I found out that our second, and last, child would be a girl, we were thrilled! But I worried that my son wouldn’t have the gift of a same-sex sibling. Would he miss out on having that brotherly bond? Would he and his sister share that same closeness? I can’t begin to tell you how many people told me that their own boy and girl duos argued and fought A LOT. I also couldn’t recall any brother and sister combos that I knew of that were really close. It’s not like I see them going to the mall or working out at the gym together. What do brother and sister siblings do together anyways? I don’t know!

As you can see, I’ve been over thinking it a bit much, but I really want to make sure my kids are close. I want them to enjoy the life-long closeness and friendship that I have with my sisters. Will that closeness be thwarted because they can’t wear each other’s clothes or do each other’s hair? Will it be hindered by the rise of interests that pulls girls one way and boys the other? I’m sure in some ways it will, but I have no doubt that despite those realities I play a distinctive role in making sure my duo remains close for the long haul.

My children are at the age where they fight over everything. I’m constantly teaching them the rules of playing nice.

No, you can’t take that toy from someone else’s hands just because you want it.

I know she called you a baby but that still doesn’t give you the right to hit her.

Yes, his humming is annoying but you need to ask him to stop and not hit him to stop.

Sometimes in the middle of all the crying and screaming, I wonder if I’m really cementing the family bond I want them to have with each other. At times my message might border more on leave each other alone. It’s so easy to give up on “working it out” and give in to “just get out of each other’s face and don’t play together.” Even though at times that might be necessary, I don’t want to get in a habit of pushing them into separate corners for concern that might just be where they stay.

They don’t have the luxury of running to another sibling. It’s just the two of them. They only have each other. I remember when my dad passed away eighteen years ago the way my sisters and I were able to pour ourselves out to each other. Grieve together. Had we not been close, that process would have been much harder. Our friendship was cultivated by parents who made it a point to remind us how lucky we are to have each other. I want to give my children that same message of sibling love that my dad gave to us.

Oddly enough it was in the middle of my children having an argument in the backseat of the car that that message came to me. Tired of all the arguing that seemed to accompany every car trip of late, I looked in the rearview mirror and asked what the problem had been this time. No sooner had we pulled out of the church parking lot the bickering had begun. Brother wanted to look at sister’s drawing she had done in class and she was not having it. She held it just out of his reach shaking her head and snidely saying no over and over. Brother was begging and crying and begging. Geez guys, I thought. Frustrated with their lack of kindness with each other and constant quarrelling over the little things, I started in on them. Just give it to him. He just wants to see your picture. He’ll give it right back. Why are you being so unkind? Don’t you know that he’s your best friend for life? Brothers and sisters are best friends for life!!

After a little more prodding, sister handed her picture over and brother told her what a beautiful job she had done. Then he gave it back and she said thank you. As this was happening, I thought about that last thing I had said. Brothers and sisters are best friends for life. That was it. That was the message that I wanted to send. Over and over and over again, until they leave my house and build homes of their own. I will say it when they’re playing nicely and remind them when they’re fighting. I will set that expectation in our house in confident hope that it will follow them into their teenage years and bloom in their adult lives. It will look different than two sisters chatting about their love of boots and all things Brad Pitt, but it will be just as special. I can’t wait to see what that looks like in years to come as their best friends for life status unfolds.