Everything looks easier in the movies. "The Sound of Music," for example, makes it look awesomely easy to have a family of seven children: they sing beautifully together! They cavort through Alpine landscapes in matching lederhosen! They harmonize!

I was driving a carpool of yelling nursery schoolers (“I’m Elsa!” “No, I’M ELSA!”) the other day as I idly wondered, “I have six kids – so why doesn’t it seem as blissful as it did in 'The Sound of Music'?” Then I realized that I don’t live on a huge Austrian estate with servants. Also, Captain von Trapp took a job that regularly took him overseas, which I don’t think was purely coincidence. Also, the mother of all those rambunctious kids died, and we are never told how. Personally, I think it’s either from having said, “I don’t KNOW where it is – why don’t you look for it?” too many times, or alternatively from sheer exhaustion. 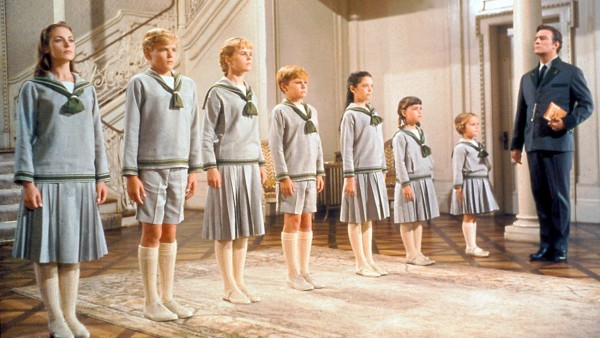 Having a large family – in my case, six children (four under 4 years old) – is not for the faint of heart, or for those who value reading the paper on a regular basis. I never knew “never a dull moment” could be taken so literally, even in the middle of the night, which is when I personally prefer to be knee-deep in dull moments, not vomit. Not everyone can, wants to, or, for that matter, should, embark upon this black diamond style of family life.

But there are a few great parts of the experience that you can put to work in your own family, no matter how many pairs of lederhosen are in the washing machine.

As the parent of six kids – in my case, four under 4 – I find that often, I am actually doing more for my kids by doing less for them and letting them do more for themselves.

Certainly, it’s to my benefit logistically to have my older kids pack their own lunches and my younger kids set the table. But I firmly believe it is to their benefit as well. Doing everything for a kid, at the end of the day, does nothing for a kid: it implicitly conveys the message, “You can’t handle doing this on your own,” and guarantees that you are going to be doing laundry for your college student. Sure, there are things a kid can’t do on his or her own. But there is so much that they can do that overprotective parents, don’t let them do, and should.

Oscar Wilde wrote, “Experience is the name that we give to our mistakes.” And it should be. Thankfully, it’s not even possible to be a helicopter parent with six kids – you can’t be in six places at the same time. And that’s a good thing. Resist the urge to correct your kid’s mistakes, whether it’s the kid’s homework or the kid having forgotten their clarinet at home. Let your kid make mistakes, learn that it’s not the end of the world, and let your kid learn how to correct them.

I’ve heard so many parents say things like, “Oh, I wish we could have dinner together, but we are going to John’s travel soccer game and then have to rush back for this birthday party for Kayla and then…” They depict things as though they are swept away in some uncontrollable tide of kid-oriented activity. I know it can feel that way, but children do not have to do every activity under the sun. Kids in big families know the world isn’t going to revolve around them – because it can't – and their world doesn’t end as a result. As a parent, you have the power to define your younger kids’ schedule. Use it wisely.

No one is perfect, but having this many kids has made me realize that any pressure to appear perfect is idiotic. I no longer am capable of being "mom-shamed." My Halloween costumes are store-bought or kid-made. My hair is frequently not brushed. If I remember it is school picture day, that is nothing short of a miracle.

And you know something? It’s okay. If kids teach you anything, it’s that imperfection is reality, and in its own way, it's even more beautiful. I’ll take reality any day, even if it ends up being a school picture of my kid wearing a T-shirt with a hole in it. Just give me a day every now and then to sleep and breathe, and we’re good.

Jordana Horn has six kids. She has written for The New York Times, The Wall Street Journal, The Washington Post, New York Magazine and many other newspapers and websites.