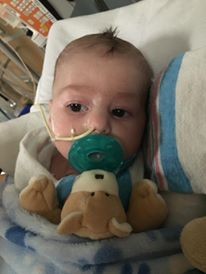 "Your son's heart will likely never function on its own, again. He will need a transplant. I'm sorry."

I don't remember much else about that morning, except burying my face in my husband's chest and screaming over and over again, "but he's just a baby!"

Now, more than a year later, recalling those moments still feels like salt in an open wound. His dozens of scars have healed, but mine haven't. I still wrestle with that darkness. It's not just the survivor's guilt or the PTSD. It's that I've been forced to return to some false normalcy, some facade of confidence and comfort.

The reality is that I don't know if those wounds will ever heal. I live in constant fear that he'll relapse. I know that his new heart is supposed to fix whatever caused his native heart to fail, but I just can’t ward off the paralyzing dread that something could still go horribly wrong. We were never given a cause for what happened, so I live underneath a shadow of doubt and uncertainty. The "what ifs" swirling around the unknowns haunt me.

Add on the overwhelming guilt of being away from him while I'm at work and you’ve got a nice little recipe for sometimes crippling anxiety that can strike without warning. When we were in the hospital, all I wanted was to hold him. All I wanted was to be with him, to play, cuddle, and do all those fun things I almost didn’t get to do. And now, I’m willingly leaving him every day to come to work. I am purposefully spending hours and hours away from him, not doing those things I longed for. My logical, rational side knows that I have to be at work so that we can afford our lives and give him the opportunities and medical care he deserves and needs. But my irrational, emotional side scorns my decision and spits in my face.

How do you reconcile being a working mom when you almost lost your baby? How do you trust others to care for him while you're away? How do you let him go off and explore the world when all you want is to protect him and hold him in your arms forever?

But I am not alone in feeling this way. All working mothers suffer the burden of being away from their precious babies. There is a bond through empathy; we share in each other’s pain. A mother’s place is with her babies; that is the way of the universe. It’s how our brains and bodies are preprogrammed and conditioned. And yet, we are forced more and more to violate those laws of nature and be separated from our children, often at the expense of our own mental health.

I think our greatest challenge as working mothers is forgiving ourselves. We are not abandoning our children, but rather striving to better their environment so that they may flourish. Yet while that is so easily stated, it is not so easily accomplished.

I have not yet found a way to put that burden of guilt down. It's one I continue to shoulder as I trudge through the work day, counting down the seconds until I can whisk away and see the sweet face that gave my life its meaning.

But I say to you now, soldier on, you working mamas. You are warriors, and you are forces to be reckoned with. And most importantly, you are great mamas.

Kate Harris is an aerospace engineer and a writer. She is also a baker, quilter, wife, and the mother of a heart transplant warrior. Kate writes for other transplant parents at www.katetheheartmom.com.

Is Our Need To Be Perfect Ruining Motherhood?
Having a spouse who takes a lot of work trips is not the same as single parenting
We are all in this together, Mama
advertisement

Is Our Need To Be Perfect Ruining Motherhood?
Having a spouse who takes a lot of work trips is not the same as single parenting
We are all in this together, Mama