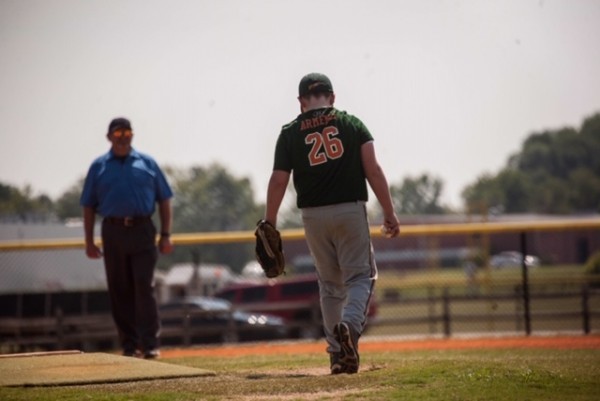 Defeated, he would begin grumbling about how the grass in our backyard would never recover and why we had the only yard with a homemade baseball diamond comprised of oddly shaped dirt base baths, yet with a perfectly round large pitcher’s mound in the center. I didn’t have the heart to tell him that the boys would faithfully hose down and rake that pitcher’s mound when he wasn’t home in preparation for the next game to played. Instead, being a supportive wife, I would just yell things to him from our deck like, “YOU SAID YOU WANTED ALL BOYS!!! NOW YOU KNOW WHAT I GO THROUGH INSIDE THE HOUSE!!! REMEMBER, HONEY: IF YOU BUILD IT, THEY WILL COME!”

Many times a day, I would find myself startled by a foul ball smacking me in the head as I relaxed on our deck or one drilling the side of our house causing the dog to bark and the baby to wake up. I would often open an empty refrigerator in our garage after having just filled it with drinks the day before. I spent much time picking up pieces of mangled wiffle balls left behind to become victims of our lawn mower.

The dirt spread, as the base paths grew larger and larger, signifying the start of base leading in little league. We were forced to replace the pickets on a neighbor’s fence every couple of weeks, as the home-run boundary moved further and further away. Right handed batters started batting left to add an additional challenge for each player. Until one day, the last game was played. The last strike was argued. The last home-run was hit. Bats were put away for one last time, even though a few wiffle balls lay strewn across the yard, waiting for the next game that had always come.

No one knew it was the last time. Not the boys in the backyard, not the parents calling them home for dinner that day. It seemed almost overnight, the field had suddenly become too small, the game no longer challenging enough and the boyish voices I had listened to make bad calls all those summer days in the backyard had now lowered several octaves.

We all know the quote “the days are long, but the years are short”. I knew it would happen quickly but even still, I was caught looking. In my efforts to calm my husband down, I would often remind him that one day, very soon, we would look out from our kitchen window and find the most beautiful yard filled with luscious green grass, worthy enough to be the envy of any golf course. Our hearts though, would look out that same window and envy the old, dusty, dirt base paths and carefully crafted pitcher’s mound.

Our youngest son was riding his little motorized 4 wheeler in our front yard the other day, while our older neighbor watched him from his porch. I use the term riding fairly loosely. It really is my son pushing the gas while I run after him shouting, “PAY ATTENTION!” and “WATCH WHERE YOU’RE GOING!”, combined with the efforts of my hands quickly cutting the steering wheel, to prevent collisions and protecting our gardens.

He spotted our neighbor, left me in the dust and hightailed it through their lawn, dismounted his four wheeler and stomped through their garden to join my neighbor on his porch. I quickly scolded him and apologized to our neighbor for the fresh 4 wheeler tracks on his front yard and the 5 year old foot prints in his flower bed. He smiled, welcomed my son and said “Don’t ever worry about that. We raise children, not lawns.”

The Time I Was Reminded, We Raise Children, Not Lawns.
A Turtle Doesn't Run Through It
Let Us Be That For Each Other - Encountering Special Needs In Public
advertisement

The Time I Was Reminded, We Raise Children, Not Lawns.
A Turtle Doesn't Run Through It
Let Us Be That For Each Other - Encountering Special Needs In Public