Baby-Tossing Dads are On to Something

A playground near my house has a zipline-style swing. You (um, I mean, the kids) sit or stand on a little disc-shaped seat dangling from a rope, grab ahold of the rope, and have someone swing you down the zipline. One day, a boy, maybe 3 years old, perched on the swing at one end of the line. His dad gripped the rope above where the boy was holding onto it. The dad ran alongside his son halfway down the line, then whipped the swing toward the end. The boy flew toward the end of the line. The pulley overhead wheeled along the cable, fast, before hitting a rubber stopper–smack. Momentum swung the boy out-out-out and then back again, gaining enough speed to zip back in the other direction along the line.

The little boy laughed and squealed. He had the biggest smile on his face.

His mom shouted over to them from the nearby grass. You can probably guess what she said, and the tone of supreme irritation she said it in. “C’mon! Do you have to swing him so hard?” 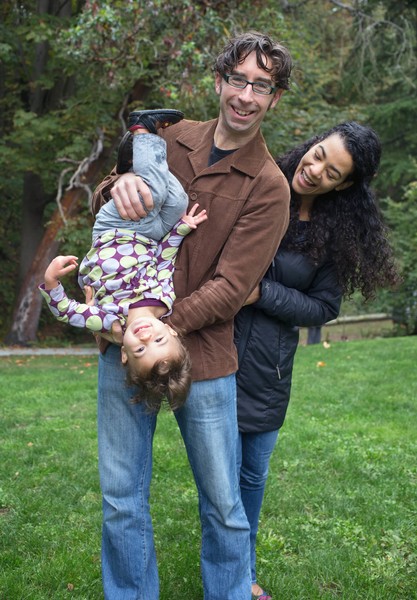 As a mom with the same protective reflex, that was my first thought, too. And I’ve had that thought when my husband tosses our daughter on the bed from afar, or when he sits her across one arm and then quickly flips her upside down.

But here’s why I don’t say anything:

All the tossing and spinning and wrestling around that dads tend to do in a more physical way than moms? It’s great for baby’s vestibular system, the part of the body that controls motion and balance. Same with all of the rocking, bouncing, and jumping that kids do on their own. Kids with a stronger vestibular system, as you might imagine, have better coordination.

In Zero to Five: 70 Essential Parenting Tips Based on Science, I mention a study where researchers sat in a swivel chair and spun infants around. Those who spun had better reflexes and were better at crawling, standing, and walking than the infants who weren’t spun. (You can spin your baby in a swivel chair, too, but it probably won’t be more interesting than just playing, roughhousing, dancing together, going about your day with your infant in a carrier, etc.)

There’s more. Scientists are finding that kids who have learning disabilities, language disorders, and attention deficits also have problems with their vestibular systems. A good sense of balance and motion may create a foundation for higher-level learning abilities, says scientist Lise Eliot.

That’s why, even if I’m feeling wary when my husband and toddler roughhouse, I just smile at them and exclaim, “Whoa!” And sometimes I even join in the fun.