What I learned from my Aunt Sharon 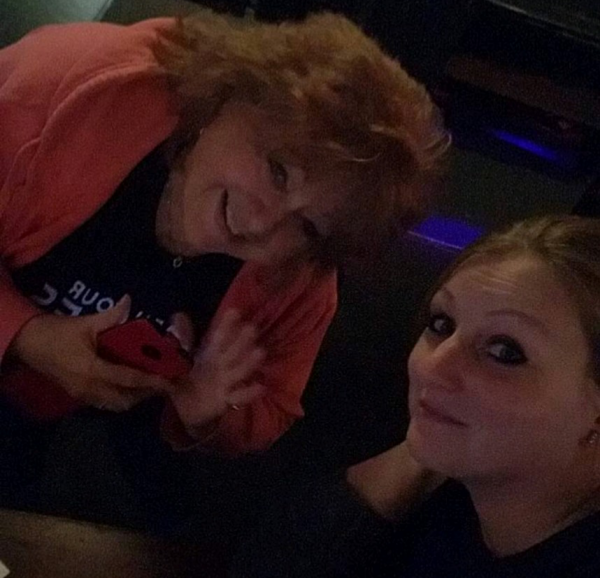 Aunt Sharon was my husband’s aunt on his mother’s side.

But for as long as I have known her (about 12 years), she has been my aunt too.

She passed away suddenly this weekend, with no explanation.

One minute she was OK.

The next, she wasn’t.

I know that it sounds cliche to say that she was my aunt too. And my husband’s family is my family…Etc., etc., etc…

But, I guess if you are married too, you understand…

I guess if you have an Aunt Sharon, you understand…

But, let’s be honest…

You don’t have an Aunt Sharon,

Because there is not one woman in the entire world like our Aunt Sharon.

Sharon was not your typical aunt by any means of the word.

First and foremost – she was EVERYONE’S aunt.

She is survived by an ARMY of neices and nephews. And that is no exaggeration.

She is survived by two sisters and a brother, who loved her deeply and unconditionally.

She is survived by a million and one other family members and friends who became her family the second she met them.

She loved with her whole self.

She was a hard worker, who even on the worst of days, smiled and laughed.

Her neices and nephews lovingly teased her for years…And she would not have it ANY other way. I believe it was her favorite thing in the world.

And I mean, REALLY GIVING.

She never came empty-handed visiting her family. Whether it was little toys for the kids or a carton of ice cream to share.

She was always late.

If we wanted her to be on time for something, we would tell her an hour earlier than everyone else…But even then, she would still be late.

But, these are the ones that I will remember her by…

When she visited our house, I didn’t feel like I was entertaining. She just belonged.

We could drink coffee or wine coolers for hours and never stop talking.

She was genuinely interested when my kids showed her their toys and video games.

She let our daughter style her hair.

Sometimes, she stayed so late, she would crash on our couch. And in the morning, she ALWAYS insisted we go out to breakfast.

Danny (the hubs) fixed her car.

She had terrible luck with vehicles.

But even though her car was broke down, she would STILL try to buy us dinner.

Her famous words were, “my treat.”

We, of course, always protested.

But, that was just her. Always trying to give.

She LOVED a good deal.

So many days, over so many years, she showed up at our house with bags and bags filled with clothes and shoes she found on clearance.

She would tell us to find our size and take it. Then she would pack up the rest and take it to the next family member she visited.

Thanks to our Aunt Sharon, my daughter will not need new shoes for at least the next five years.

She offered to babysit all the time.

That woman worked a thousand hours every week, but still called Danny on a Friday night to say, “do you and your wife need a date night?”…”Do you need to go shopping?” ….”I’ll watch the kids.”

And, of course, if we didn’t need or want to go out…We would invite her over anyway…

And we would drink coffee…

Danny would lovingly tease her about her hair.

Our kids would sit in her lap and show her things.

Our daughter would go through her purse…Because, her whole life was in that thing.

She wanted to hear how Danny was doing at work.

She wanted to hear about the kids in school.

She made herself at home.

But the thing about Sharon was: she was always home.

Whether it was at our house, one of her siblings’ houses, or a neice or nephew’s…All of our homes were her home.

I don’t think any of us ever wanted her to leave our houses.

And we certainly didn’t want her to leave this world.

It feels so unfair that so many people just lost this amazing woman.

But I know that we will never stop loving her.

And we will never stop telling her stories.

And we will never stop laughing about all the fun we had with her.

I wish the world was full of more people like her…

But there will never, ever be another Aunt Sharon.

I'm Jennifer. I'm a preschool teacher turned stay-at-home-mom. Yeah - I get it. That statement just screams: 'The Wheels on the Bus' is my anthem. But, I assure you, it's not! I spend my days drinking coffee, cussing out the laundry, and taking care of my four kids. I own a personal blog called, I Wore This Yesterday, where I write about my life. Sometimes I use it to vent about motherhood. Sometimes it's fluffy. Bottom line - I have very little filter and love sharing my highs, lows, and laughs!

Before Kids, I was Every Mother's Toughest Critic
TO THE GRANDPARENT WHO IS MY KID’S BEST FRIEND
Your Control Issues Are A Problem (#EmbraceTheChaos)
advertisement

Before Kids, I was Every Mother's Toughest Critic
TO THE GRANDPARENT WHO IS MY KID’S BEST FRIEND
Your Control Issues Are A Problem (#EmbraceTheChaos)