As My Child Grows Up, I Refuse to Be Haunted by Christmases Past 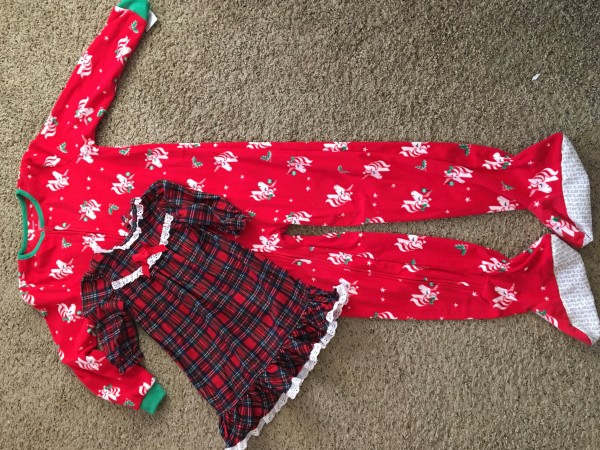 Every now and then, I'm visited by a ghost of Christmas past, which most recently appeared in the form of a tiny flannel nightgown that was laid to rest years ago. It was worn by my daughter the Christmas she was a year old and resurfaced the other day as I was purging closets in preparation for the incoming barrage of Christmas gifts.

Before wrapping her pajamas of Christmas present—the cute footie kind in a massive size 8, which honestly, I wasn't sure they even made—I tortured my mama heart by comparing the two. The past and present seemed at odds.

For a moment, nothing made sense.

How could she have been small enough to wear that tiny nightgown?

Was she ever THAT little?

How is it possible that she's now a size 8 and wears pajamas fit for a giant?

When did she get SO big?

How did any of this happen?

And honestly, this parenting gig will probably never make sense. One day it seems like time is trickling by like a slow drip from a leaky faucet. And the next it feels like the years have rushed by in a torrent of chaos, changing the landscape before I even have a chance to notice.

I clutched that nightgown against my chest as memories of that long-ago Christmas swirled around me. I saw my little girl sitting in my lap as I read her the story of Jesus' birth. I saw her twirling through a sea of discarded wrapping paper. And I saw her sleeping, her plaid nightgown the perfect complement to the snow falling outside.

As expected, this ghost of Christmas past tried to lure me into longing for what will never again be—the littleness, the innocence, the illusion of some former picture-perfect holiday.

And for a minute, I did miss it. Who wouldn't? There were the chunky thighs, the wisps of fine hair, the child who slept in my arms. And of course, the doll-sized clothes that would make any mother's heart sing.

But as I finished wrapping the new big girl pajamas, the past and present reconciled. If not for the past, there would be no present.

As sweet as the memories of Christmas past are, I refuse to be haunted by them. Because right now, at this moment, we're in the thick of Christmas present. And while my daughter isn't as small or innocent as she once was, she's just as precious. I've listened to her belt out carols to an aging audience, her face emanating the joy she used her voice to spread. She's read me the story of Jesus' birth, and picked out toys for other kids, and wrapped homemade gifts for her family.

She's learning to take on Christmas in all of the best ways. And that's nothing to be afraid of. It's something to celebrate.

So while there are many precious Christmas memories behind us—moments never to be had again—I'm not going to miss the ones being made right in front of me. Because while I've said goodbye to that little girl in the flannel nightgown, there's still so much more to welcome.

What Santa Brought Me For Christmas
Dear Dads, Take the Picture
'My lost boy somehow found a way'
advertisement

What Santa Brought Me For Christmas
Dear Dads, Take the Picture
'My lost boy somehow found a way'