An Unexpected Moment at the Today Parenting Team Breakfast

Published by Stacy Feintuch on October 7, 2019 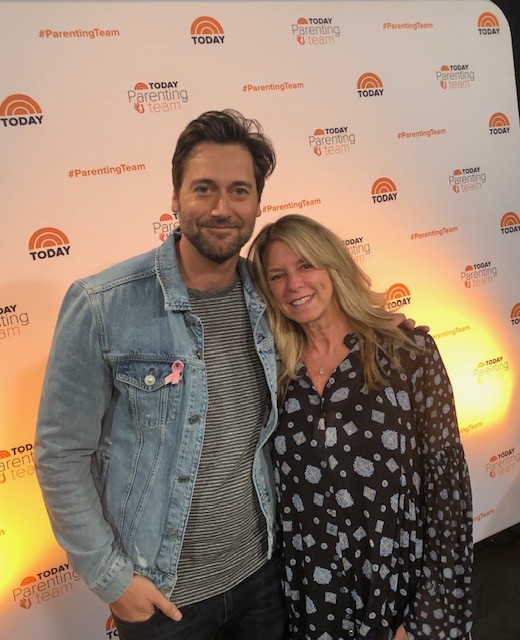 It’s funny how sometimes things turn out much different than expected.

It happened to me last week when I went to the Today Parenting Breakfast to see a sneak preview of the show “New Amsterdam” and have a Q&A with the star, Ryan Eggold.

I was thrilled to be invited. It was an honor to be included among the women who write for Today Parents.

I was looking forward to it. I envisioned networking with other mom writers, maybe gain a contact or find a new writer for Living the Second Act. I was excited to see New Amsterdam and hopefully get to speak with Ryan Eggold. It sounded like a wonderful opportunity and a fun morning.

I walked into a room of lovely women. That was it. I walked in. Then I did not know what to do.

Many of these women seemed to know each other already and were chatting in various groups. Should I walk over to a group of women I had never met?

I don’t care how old you are, walking into a room full of women like that and not knowing a soul is quite intimidating. I felt like I was back in middle school.

I walked over to the buffet, got some fruit and a cup of coffee and sat down. I looked around the room and noticed I was the oldest mom there. I write about my college-age daughters but most of the Today Parenting Team writes about raising young children, even babies.

This morning was not going as expected.

After a few minutes sipping my coffee slowly, a lovely woman sat down next to me. She didn’t seem know anyone either. We spoke for a few minutes and told each other our stories. Suddenly, I was relaxed and comfortable. It’s always good to have a friend to sit with.

Then, we watched the episode of New Amsterdam. The entire show is wonderful but there was one scene that stood out to me. The main character talks about losing his wife and raising their baby daughter on his own. He explained that there is “no time to grieve” because he put all of his energy into caring for his daughter.

I suddenly saw myself in this character. His words were my words. After my husband died eight years ago, I said those words countless times.There was no time to worry about me - all my efforts were for my children who no longer had their father.

The lights went on when the episode was over, and there was Ryan Eggold at the front of the room, ready to be interviewed by Rebecca Dube, Head of Today Parents.

After the wonderful interview, he was generous enough to take questions from those of us in the audience. While I did not have a question, my hand went up immediately.

“I just want to tell you what a wonderful scene that was when you spoke about the death of your wife. I was a young widow with two young daughters when my husband passed away suddenly. Everything expressed in that scene rang so true with me. That is how we all feel - that there is no time for us to grieve because it is all about our kids. Thank you for sharing those feelings on screen and letting the world know.”

Ryan Eggold thanked me profusely for sharing that with him. When the interview was over, Rebecca told me that my statement really had an impact on him.

When it was time to leave, I said goodbye to my new friend and to Rebecca. I was feeling good. I might not have gained contacts or networked the way I had hoped but I met a nice woman and I made an impactful statement to a TV star. Not a bad morning.

Then, as I was walking out the door, the most amazing thing happened.

A young woman who worked at NBC, probably not much older than my own girls, walked up to me and said, “I just want to thank you for what you said in there. My father died two years ago. Today is the anniversary of his death, which is such a hard day, but hearing you made it better. You remind me of my mom, who is my hero. I am sure you are the hero for your girls.”

I started to cry and hugged this lovely girl. We both cried as we spoke for a minute about our losses and hugged again when I left.

Things just may happen for a reason. THAT was why I was there that morning. Not to meet a TV star, not to gain contacts, but to help that girl get through a very hard day. She helped me as well. It was a moment I will keep with me for the rest of my life.

Sometimes, things do turn out different than expected.

Why 'This Is Us' Is As Real As It Gets
How My Son Made Me A Mother
To the football coach who taught my son a lesson: I am thankful for your words
advertisement

Why 'This Is Us' Is As Real As It Gets
How My Son Made Me A Mother
To the football coach who taught my son a lesson: I am thankful for your words